Davies: Staying at Ducati a "risk" with V4 bike 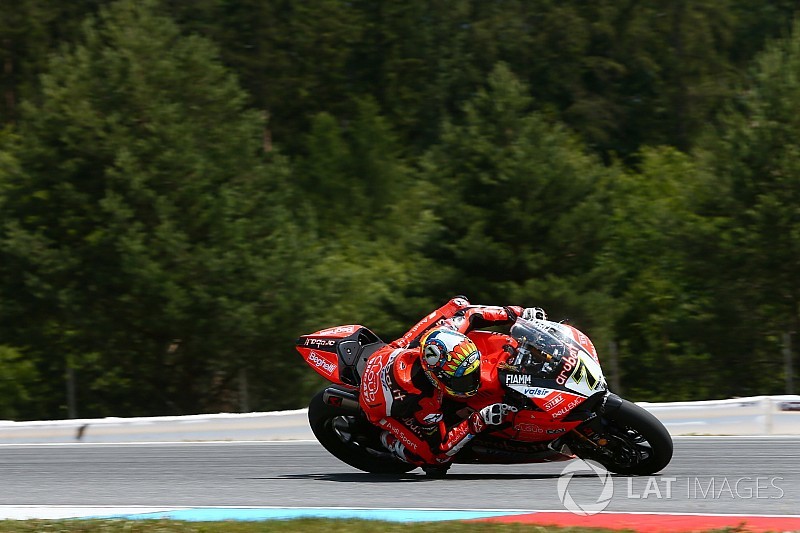 Chaz Davies admits he is evaluating the “risk factor” of a potentially uncompetitive Ducati V4 Panigale in 2019 in his decision whether to remain with the Italian marque in World Superbike.

Ducati will switch from its 1199cc V-Twin Panigale – which it has run since 2013 - to its new V4 model next season, having carried out an extensive testing programme with it this year.

Davies' current deal with Ducati expires at the end of 2018, and he has been linked with a potential move to the factory Kawasaki team.

The Welshman says the possible “long development period” of the new Ducati, and a potential low-key season next year is something that has to be “considered” as he finalises his plans for the future.

“The question mark is there is a new bike coming, and these things usually take time to develop,” Davies said.

“So that's the question that I have to decide if I am willing to accept that risk, that there could be a long development period with the bike.

“Although, I'd like to think different, I have to think about that a lot. So happy from the Ducati/Aruba side, everything like that is great.

“But, then, for the opportunity to become world champion in 2019 is something that has to be considered, and balance the risk factor because there is a big risk factor.”

Davies finished third at Brno on Sunday, and this moved him to within 65 points of Jonathan Rea in second after the championship leader crashed out in a clash with teammate Tom Sykes.

The Ducati rider was pleased to “take a nice gift”, but admits his target remains on getting the Ducati back to being a constant frontrunner rather than a tilt for this year's title.

He added: “Any little gift like that is [good], I'll take it as a nice gift, something like that doesn't come around very often.

“But, to be honest, until we put our package back to how I know it can be, how it can perform, that's my target right now.

“Right now, not being able to extract everything out of our package, [correcting this] is what is my first priority before looking at championship points.”

Rea could win in MotoGP "with time", says crew chief