Davies a doubt for Portimao after breaking collarbone 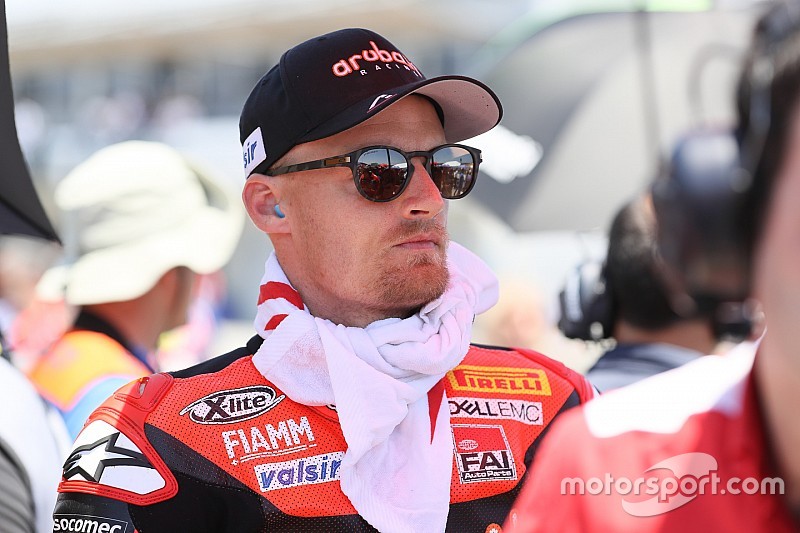 Chaz Davies' participation in the Portugal World Superbike round appears in doubt, after he suffered a collarbone injury while training in Aragon.

The Ducati rider was training on his supermotard bike in Aragon on Thursday when he fell from it, fracturing his right collarbone.

He has was taken to hospital in Alcaniz before being transferred to the Dexeus Hospital in Barcelona, where he is weighing up surgery, although it is thought no operation would carried out until Monday.

This would leave Davies with just over a week to be ready for the resumption of racing at Portimao on September 14-16.

Davies suffered an identical injury to the same shoulder last month, and was forced to miss the on-track celebrations at World Ducati Week at Misano.

Ducati has yet to comment on the situation, though it would seem likely the Italian marque would call up test rider Michele Pirro – who is currently dominating the Italian SBK series aboard a Panigale – to take Davies' place if he can't race.

Davies' fellow Brit Leon Camier was forced to back out of Honda's Suzuka 8 Hour assault after breaking his collarbone last month, while Kawasaki's Tom Sykes was absent from last week's Portimao test after suffering an ankle injury.

Last week it was confirmed Davies would remain a Ducati WSBK rider through to the end of 2020, with current Nieto MotoGP rider Alvaro Bautista joining him and replacing Marco Melandri.