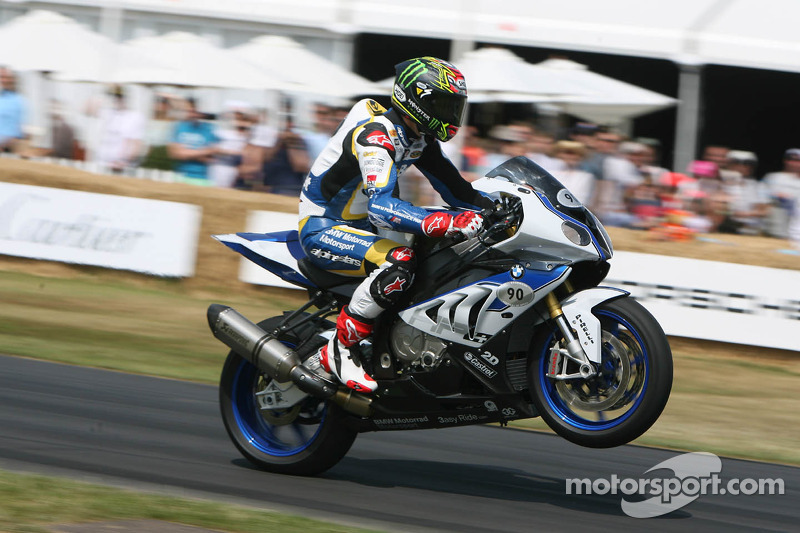 The BMW Motorrad factory rider climbed the hill with the brand new supersports bike at the 2013 “Goodwood Festival of Speed”.

Munich/Chichester - Every summer, there is a place to be for motorsport enthusiasts in Great Britain: the “Goodwood Festival of Speed”. The legendary event, which regularly lures over 100.000 fans to Goodwood House near Chichester (GBR), celebrated its 20th anniversary this weekend. It is the mixture of today’s stars and heroes from the past, of historic and modern race vehicles, which defines the fascination of the “Festival of Speed”. BMW has taken part in the event for many years, bringing historic and current cars and bikes to Goodwood. This year, the German manufacturer was represented by factory rider Chaz Davies (GBR) from the BMW Motorrad GoldBet SBK Team. 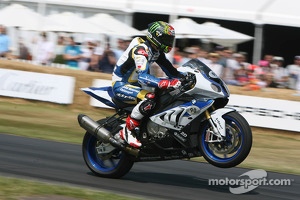 Chaz switched his BMW S 1000 RR which he races in the FIM Superbike World Championship for a road version of the new BMW HP4. The Welshman contested the famous Goodwood hillclimb runs with this latest supersports bike from BMW Motorrad. The BMW HP4 is based on the RR and was launched at the end of 2012. One of the technical highlights of the bike is the innovative electronic damping system DDC. This year, the BMW HP4 not only starts to conquer the streets worldwide, but also the international race tracks, with victories in series like the FIM Superstock 1000 Cup, where HP4 rider Sylvain Barrier (FRA) is currently leading the championship, or the South African Superbike Championship. In addition, Chaz did a short run with the BMW R 1100 S Boxer Cup race bike and he visited the “90 Years of BMW Motorrad” stand to have a close look at the range of BMW bikes of the past nine decades.

“Goodwood is always an amazing place to be. It’s so much fun to be here. You have so much here, there's not just motorcycles from every era but also cars, from a hundred years old to modern F1”, said Chaz. “And it was great to see people like Kenny Roberts, Kevin Schwantz and Giacamo Agostini. There are true legends from every age of racing, two and four wheels. My bike was in the paddock next to Helmut Dähne, who was on an amazing BMW Classic bike.”

“The HP4 was great to ride”, Chaz continued. “The traction control really comes into its own, as the surface on the Hill Climb is slippery enough. But the HP4 managed to keep on top of it all. I did a few wheelies along the way, too. I had a very quick ride on the R 1100 S Boxer Cup race bike too. I wanted to see what the anti-dive Telelever forks felt like. It’s an amazing bit of engineering, it really does improve the handling if you’re braking into a corner. And the Boxer engine was great. The ‘90 Years of BMW Motorrad’ stand was fantastic and the bikes are very cool. I especially love the Concept Ninety.”

This weekend, Chaz will be in action on his BMW S 1000 RR again together with his team-mate Marco Melandri (ITA) and with the BMW Motorrad GoldBet SBK Team he will tackle the eighth round of the 2013 FIM Superbike World Championship at “Moscow Raceway” in Russia.

Since 1993, the “Festival of Speed” has been held every year on the estate of motorsport enthusiast Lord March in the British county of West Sussex. It is here, where current stars and historic legends from automobile and motorcycle racing meet. Highlights are always the hillclimb runs, during which the riders and drivers race up the world-famous 1.16-mile road through the Goodwood House estate in and on modern and historic race vehicles.

WSBK enters second half of the season at Moscow Raceway