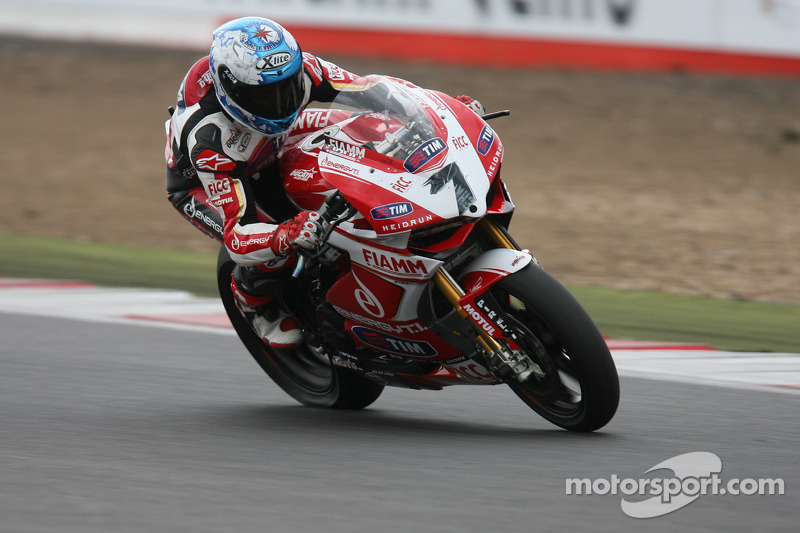 In Jerez, during the final SBK round of the 2013 season, the Spanish rider, after twenty years or racing and success, has confirmed his decision to retire.

Jerez de la Frontera (Spain), Saturday 19 October 2013: on the eve of the final races of the 2013 World Superbike championship, taking place at the Andalusian track of Jerez de la Frontera, Carlos Checa, 2011 world champion with Ducati, has announced his retirement from the world of racing.

The announcement was made by Carlos himself, in the presence of journalists, colleagues, sponsors and friends who were invited to the Ducati Alstare hospitality today. An intimate and emotional affair, which gave the Spanish rider the chance to thank a world that he has belonged to for many years and to which he has made such an important contribution.

The name of Carlos Checa is synonymous with motorcycle racing and, at the same time, with the Ducati brand. The Catalonian rider, who celebrated his 41st birthday just a few days ago, made his debut on the world scene back in 1993, when he took part in the GP 250 championship. In the twenty years that followed, he went on to compete in the 500, MotoGP and Superbike championships. Having raced with Ducati in MotoGP in 2005, 2010 saw Carlos return to Ducati but this time in the World Superbike championship. An important decision, but also an inspiring and positive one, given that, after finishing third overall in 2010, he won the world title with Ducati and the Althea Racing team the following year, in 2011.

Unfortunately Checa has not been able to end his career as he would have wanted, due to a bad accident at Istanbul last month which has prevented him from participating in the final rounds of this 2013 season. Despite a challenging season this year, Carlos retires from professional motorsport a very satisfied man, taking with him countless successes, memories and lifelong friendships.

Such passion and dedication could not end with goodbye. As Carlos announced his retirement, Ducati took the opportunity to confirm that Carlos Checa will have a role as ambassador, allowing the Catalonian to continue to collaborate with Borgo Panigale as a very special Ducatista.

In celebration of Carlos’ 20th anniversary of competition, Nolan wanted to create a commemorative helmet, with special graphics dedicated to this important milestone. The helmet was presented this afternoon, just after Carlos’ retirement announcement, further heightening emotions for those present.

Another demonstration of affection and esteem arrives from the circuit of Jerez, that has decided to dedicate a part of its “Hall of Fame” in its new museum (that will be opened to the public in 2014) to Carlos Checa, his brilliant career and SBK world title - he remains the only Spanish rider up until now to have achieved this goal.

Carlos Checa:
“This year I am celebrating twenty years of racing at world championship level. I am extremely proud of this long sporting career, which has given me many special memories of all the teams I have worked with. I have had the opportunity to compete at the highest level, riding the best bikes and winning against the best rivals. My aim has always been to discover my limits and to be able to take a close look at myself in order to continue to learn, grow and become a better rider and a better person. This is something that would not have possible without taking this path, full of risk, but which has also provided me with great challenges, adversaries and emotions; a long climb which culminated with my best season in 2011. There is a moment that will always arrive in the life of a sportsman, the day on which you say enough is enough. This day has arrived for me today. It was not an easy decision, but one that I’ve thought long and hard about. I am grateful to the entire motorcycle family, to those who make it possible for this world to exist and especially to those who have supported me and followed me from the start, for having given me the opportunity to pursue my dream and live a life that I wouldn’t have changed for any other. I will now move on to discover new things about myself, a new and stimulating phase now begins for me in Ducati. It will take time to adapt but I am confident about my future and the satisfactions that it will surely continue to give me. Thanks again to everyone for being here to support me on what is a very special day for me, definitely emotional but also unforgettable.”

Ernesto Marinelli:
"The decision that Carlos has taken is a very important one. Carlos has carried out key, constructive work for us over the years together, and the winning of the world title in 2011 is proof that, together, we have been able to achieve important goals. It goes without saying that we are extremely appreciative and it’s important that we show him this with our affection and recognition. We will continue to collaborate in the future, and having him as an ambassador of our brand is an honour for us, and will surely please all of the ducatistas. I therefore like to think that this is not the end of a book but simply the start of a new chapter.”

Francis Batta:
“Carlos’ decision signifies the departure of one of this championship’s protagonists of recent years, and he will leave a hole that will be very difficult to fill. This year I had the chance to get to know Carlos better and I can guarantee that he is a person of great humanity, a real professional who always gives 100%. Together with Ducati, we started down a new path this year. It hasn’t been easy, because unfortunately we made a late start, but I am convinced that if Carlos had not decided to retire, his contribution would surely have brought us great satisfaction. I’m sorry for Superbike, I’m pleased Carlos will remain in Ducati as an ambassador and I really wish him all the luck in the world.”