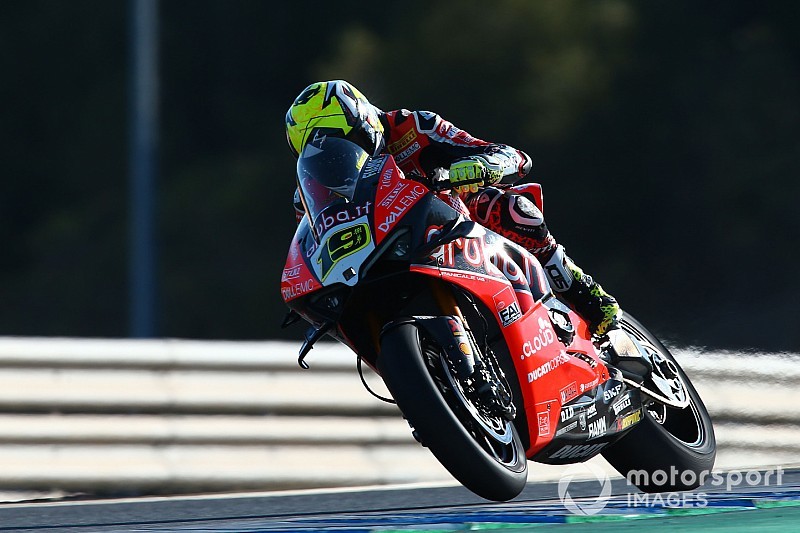 Ducati's Alvaro Bautista took a dominant victory in the opening World Superbike race at Jerez as Jonathan Rea finished a provisional third after sending Alex Lowes into a crash.

Rea converted his pole position into a Turn 1 lead but Bautista looked racy from the get-go and passed his rival at Turn 5 on the opening lap.

Bautista then pulled away, with Rea only a few tenths slower initially, but the Kawasaki rider's pace soon deteriorated.

Rea's deficit to Bautista was five seconds by lap 9 but the Northern Irishman had to turn his attention to the charging Yamahas of Michael van der Mark and Alex Lowes.

Van der Mark quickly made a move at Turn 6 with Lowes also following suit a lap later but, while the Dutchman pulled away, Lowes couldn't shake Rea off.

Bautista continued to pull away from van der Mark and eventually won his 12th WSBK race by 7.1s, with the latter completing a similarly lonely race in second.

Lowes looked to have made the decisive move at Turn 13 on lap 15, but Rea stayed close to him and made a desperate move at the final corner of the race.

But Lowes crashed as a result of the incident, with Rea crossing the line third. The incident is currently under investigation.

GRT Yamaha and Puccetti Kawasaki riders Marco Melandri and Toprak Razgatlioglu had a race-long battle for fifth - which became fourth after the Lowes crash - with the Italian eventually winning the duel.