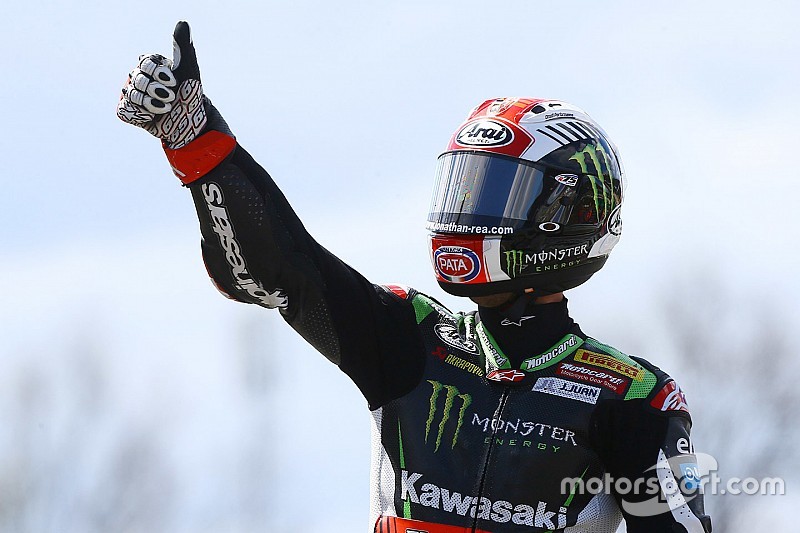 Jonathan Rea took his sixth victory in seven World Superbike races after a race-long duel with Chaz Davies which ended in the Ducati rider suffering a mechanical breakdown.

Rea had initially secured pole position, but was handed a three-place penalty for blocking Davies during a fast lap in Superpole - an incident that led to a spat between the pair in Parc Ferme.

That meant Rea's Kawasaki teammate Tom Sykes started from pole position, ahead of Davies, Lorenzo Savadori's Milwaukee Aprilia and Rea - but it was Davies who raced into an early lead, with Rea moving clear of Sykes to lead the pursuit of the Ducati rider on the second lap.

Rea followed closely in Davies' wheeltracks for a number of laps, with Sykes following the pair closely as the three leaders quickly distanced themselves from fourth-placed Marco Melandri (Ducati).

It wasn't until the 18th lap of 21 that Rea finally found a way past Davies for the first time, but the Welshman immediately responded by taking back the lead at the final chicane.

Both moves repeated themselves on the following lap, with Davies keeping the advantage, but Rea managed to seize back the advantage on the penultimate lap with an inside move at Turn 3.

But as the pair reached the final chicane, Davies' Panigale R started to slow, before coming to a halt on the start/finish straight - giving Rea a clear run to a sixth successive win at Assen.

Sykes made it a Kawasaki 1-2, 4.5 seconds behind Rea at the finish, while Melandri completed the podium a further 13s behind.

Nicky Hayden had been in the mix for a top 10 finish on the second Honda, but faded to 14th on the final lap.

Both Yamaha riders crashed out of the race, with home hero Michael van der Mark going down early after dropping to last at the first corner, and Alex Lowes falling at Turn 10 at mid-distance.