Barcelona (Spain), Tuesday 22 April 2014 - Since 1992 the TT Circuit Assen has been part of the World Superbike calendar and it is currently the second most visited venue in the history of the series after Phillip Island. Also known as the Circuit van Drenthe, it is one of the oldest permanent racetracks in Europe. Since the opening in 1926 it has been subject to several modifications, with the current layout featuring six left handers, eleven right handers and a 300m long start/finish straight.

After raising the bar in the second round of the season, the Kawasaki Racing Team hopes to keep the momentum going. The dominant performance by KRT duo Tom Sykes and Loris Baz at Aragon had a significant impact on the points situation, leaving only Aprilia Racing Team’s Sylvain Guintoli within close range. The Frenchman is 11 points shy of the man in the lead Tom Sykes, whilst other works Aprilia rider Melandri lies fourth in the standings with a 26 point gap. The Italian rider is followed closely by Pata Honda’s Jonathan Rea (27) and Voltcom Crescent Suzuki’s Eugene Laverty (29).

Rea approaches the team’s home round with renewed confidence after the solid results achieved so far aboard his CBR1000RR Fireblade SP. The Ulsterman is the current WSBK active rider with the most wins at Assen – four, including a double taken in 2010. 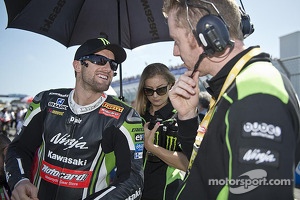 Laverty climbed on the top step of the podium at Assen for the first time last year, as he got the better of race 1 winner Sykes after a masterful display of riding and determination. He and his team mate Alex Lowes are hoping to make the most of a more suitable track for their GSX-R machines, likewise Ducati Superbike Team duo Davide Giugliano and Chaz Davies, who did not fulfil their own expectations last time out at Aragon.

MV Agusta RC – Yakhnich Motorsport and Team Hero EBR continue their learning curve within the eni FIM Superbike World Championship, aiming to narrow the gap to the other manufacturers during the third round of the season.

Following a positive debut in Spain, Bimota Alstare pairing of Ayrton Badovini and Christian Iddon will get in the mix again to challenge the rest the EVO field.

The Assen TT Circuit has witnessed many spectacular battles for the win in the Supersport World Championship, the last of which happened in 2013, when reigning Champion Sam Lowes edged out Kenan Sofuoglu (Mahi Racing Team India Kawasaki) at the finish line for only 38 thousandths of a second.

After the DNF in the opening race at Phillip Island, three time WSS Champion was back on top of the podium at Aragon. Sofuoglu found himself in the lead after the collision occurred to Kev Coghlan (DMC-Panavto Yamaha) and Jules Cluzel (MV Agusta RC – Yakhnich Motorsport), eventually crossing the line the race winner ahead of Michael van der Mark (Pata Honda World Supersport) and Florian Marino (Intermoto Ponyexpres Kawasaki).

Local rider van der Mark is looking forward to a strong performance in front of his home crowd, hoping as well to achieve his first race win in the Supersport World Championship.

Coghlan, who was able to claim a fifth place in Spain despite the unfortunate crash, currently heads a tight title race that sees Marino just two points behind in second, whilst Raffaele De Rosa (CIA Insurance Honda), Sofuoglu and Cluzel are six points shy of the leader.

The FIM Superstock 1000 Cup riders are heading to the Assen TT Circuit for the second round of the season. Barni Racing Team’s Leandro Mercado dominated the first racing weekend of 2014 at MotorLand Aragon by achieving both pole position and race win, as well as recording the fastest lap of the race.

The Argentinean rider hopes for a repeat performance on the Dutch track, on which he was fourth last year, given also that in 2013 two of the three podium positions were taken by Barni Racing riders, with La Marra winner and Canepa third placed.

Mercado’s team mate Ondrej Jezek is keen on turning the page on an unlucky opening race and likewise EAB Racing Team’s Fabio Massei he hopes to show his abilities on the full race distance. Second place at Aragon Lorenzo Savadori (Team Pedercini Kawasaki) is aiming to give Mercado a harder time at Assen, whilst Kyle Smith (Agro-on Wil Racedays Honda) would love nothing more than another podium finish after his positive STK1000 debut race in Spain.

Marco Faccani and Andrea Tucci started off well their rookie campaign in the FIM Europe Superstock 600 Championship by scoring a sensational one-two in the opening race of the season at MotorLand Aragon.

The San Carlo Team Italia duo, representing the Italian Motorcycling Federation in the series, are looking strong for the second event of the season at Assen, home round for Aragon’s third place finisher Wayne Tessels (Wayne Racing Team Suzuki).

The 20 year old Dutchman, who is currently contesting his second year in the series, fiercely challenged Tucci for the second place in Spain. Finland’s Niki Tuuli (Kallio Racing Yamaha) was also in contention for the top 3 and part of the spectacular eight way battle at the front that characterised the early stages of the race.