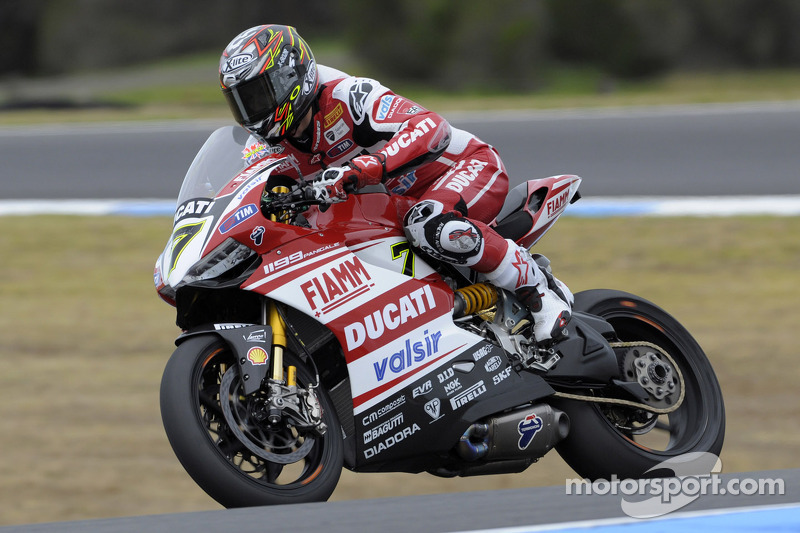 In this second round of the 2014 Superbike World championship, rider Chaz Davies finished fourth in today’s first Superbike race.

Alcaniz (Spain) – A rather bittersweet day for the Ducati Superbike Team that just missed out on a podium finish in race 1 at Motorland Aragon in Spain today. In this second round of the 2014 Superbike World championship, rider Chaz Davies finished fourth in today’s first Superbike race while his teammate Davide Giugliano closed the day’s races in seventh and eighth position.

Race 1 – In accordance with the new race day schedule, the first action-packed SBK race of the day kicked off at the earlier time of 10.30am in dry conditions but on a cool track (16°C). Starting from fourth on the grid, Giugliano made a fast start and was into third by the end of the opening lap, right behind the two Kawasakis of Sykes and Baz. Davide got past Baz on lap 3 but then continued to battle with the Frenchman over the subsequent laps. He held third position for the best part of the race right until the final lap when he was caught, and ultimately passed by Rea along the long straight.

In his attempt to regain third position through the final corners, there was contact between Giugliano and the British rider and unfortunately it was the Italian who came off worse, crashing in the process. By immediately climbing back on his 1199 Panigale, the Ducati Superbike rider was able to cross the line, in final eighth position. Davies, sixth on the grid, was lying seventh through the opening stages. Giving chase to the two Aprilias (Melandri and Guintoli), he managed to pass both at the mid-race point. Up into fifth by lap thirteen, Chaz concluded the race in final fourth position.

Race 2 – considering the hotter track conditions, both Ducati riders, along with most of the other Superbike riders, changed tyre for the second race. Giugliano once again made a strong start and was in fourth place at the end of lap one. Davies, seventh through the first corners, overtook the two Aprilias to position himself fifth just behind his teammate. On lap two Chaz recorded the fastest lap of the race, earning his second Pirelli ‘best lap’ award of the season (1’57.982).

Unfortunately only a couple of laps later he was the victim of a crash and was unable to continue the race. Giugliano was lying sixth by the mid-race point, with several seconds separating him from the riders immediately ahead of him. In the final phase of the race a drop in grip limited his ability to exit the corners and the Italian rider this closed in seventh position.

After the first two of fourteen scheduled rounds, Giugliano is in seventh position in the general standings, with 43 points, while Davies is eighth with 30 points. Ducati lies fifth in the manufacturer’s classification with 48 points.

Chaz Davies (Ducati Superbike Team #7) – 4th, DNF: “Race 1 didn’t go as I’d hoped, despite my final position. I made a bad start and then was stuck behind the two Aprilias for a long while. I finally managed to get past them and got into something of a rhythm but then a drop in the tyre performance meant I couldn’t do more. We made some changes for the second race but the front of the bike seemed a little nervous right from the start. I was trying to save the tyre for the later stages of the race but then I lost grip at the front and crashed. For some reason the marshals wouldn’t let me continue even though my bike was still running. It’s been a disappointing day because I think Davide and I were capable of reaching the podium today. We’ve taken some important data anyway and now we move on to tracks that should be more favourable for the Ducati.”

Davide Giugliano (Ducati Superbike Team #34) – 8th, 7th: “It’s been a tricky weekend for us. This morning we had a good chance to do well, we couldn’t have beaten the Kawasakis as they have been really strong here but the podium was definitely within our reach. Unfortunately the contact with Rea put me out of the running for the podium but we came extremely close. In race 2 I really struggled; conditions were hotter and the different rear tyre didn’t make things easier for us. But we knew this was one of the hardest tracks for us and so we have to be fairly satisfied – if the bike has improved so much that we can be that close to the front here then we should be happy. My team has worked really well, the bike is riding well and so I thank my whole team and everyone in Ducati for their hard work."

Ernesto Marinelli – Ducati Superbike Project Director: “Of course we are a little disappointed because we only just missed out on the podium. We knew this would be a difficult track for us but compared to last year we have almost halved the gap along the straight and we are also satisfied to come away with important points. Davide aand Chaz have shown that they can fight for the positions that count and so we will make good use of the data collated here and immediately turn our attention to the next races.”