The Toyota driver clinched his third career WRC victory with a margin of 22s over Hyundai’s Thierry Neuville, while Esapekka Lappi on his return to the factory Toyota team claimed the final podium in third.

Opening the road, Rovanpera grabbed the lead of the rally after Stage 3 but became embroiled in at times a six-way tussle for the lead on Friday, as only 8.9s separated the cars after stage 5.

The Finn managed to overturn Neuville’s 4.3s overnight lead on Saturday’s first stage to mark the fifth change of lead with Lappi, Evans and Ott Tanak all enjoying a brief spells in front.

Once ahead, Rovanpera was pushed hard by Evans through Saturday as the fight for victory developed into a two-horse race. However, the latter made an error at the final corner of Saturday night’s spectator stage that resulted in a wild finish over a snowbank.

The unorthodox finish resulted in a 10s penalty that effectively put the Welshman out of the fight before he then crashed on Sunday morning’s first stage and then retired with an issue with his hybrid system.

From there, Rovanpera, who won six stages, was able to cruise to victory to take the championship lead in the event his father Harri Rovanpera recorded his only WRC win in 2001.

Neuville ended the rally with a flourish to claim third on the power stage to bag three extra points along with those for finishing second overall.

Lappi claimed third, 30.6s adrift, on his return to the WRC having shown strong pace throughout including a stage win on Friday.

Toyota’s Takamoto Katsuta brought his Toyota GR Yaris home in fourth having been delayed by 39s earlier in the rally after a run in with a snowbank. 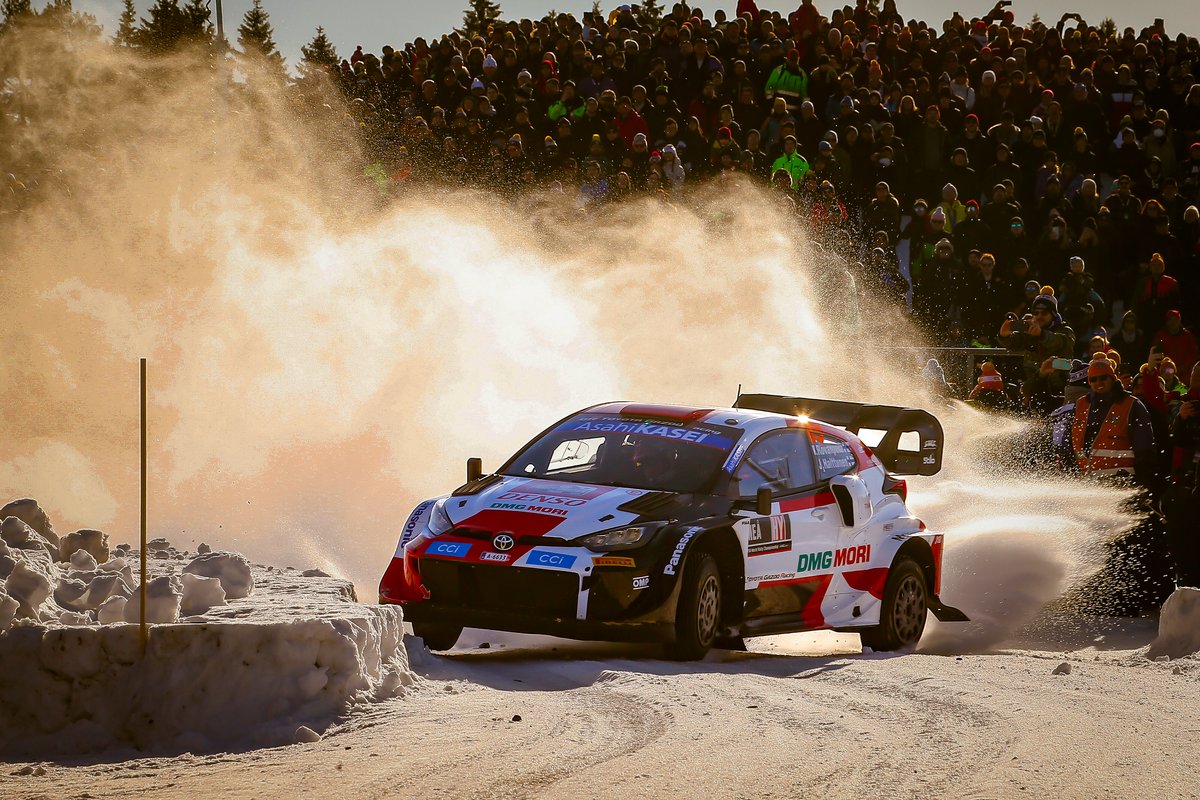 After the Monte Carlo heroics, M-Sport endured a difficult rally with Gus Greensmith the only car to complete the full rally distance in fifth. The Briton was 3min20.4s adrift, having lost time to a gearbox and hybrid issue on Friday.

Craig Breen was forced out of the rally twice, the first with a crash on stage 3 before a technical issue put him out on Saturday. He returned on Sunday to snatch a point on the power stage. Teammate Adrien Fourmaux exited the rally from sixth after an electrical issue on Saturday night.

Hyundai’s Oliver Solberg completed the Rally1 finishers in sixth. The Swede had run as high as second on Friday but lost confidence in his i20 N through Saturday, before receiving a 2min40s penalty for checking in late after a throttle issue on the way to Saturday night’s final stage.

Teammate Tanak appeared set to be a factor in the victory battle until he was forced out of the event due to a hybrid failure on Friday when sitting in second spot after stage 5.

The 2019 world champion did however return to the action to win the five bonus points for winning the power stage, ending the test 1.9s faster than Rovanpera.

The championship will face a lengthy break until a trip to Croatia for the third round from 21-24 April.