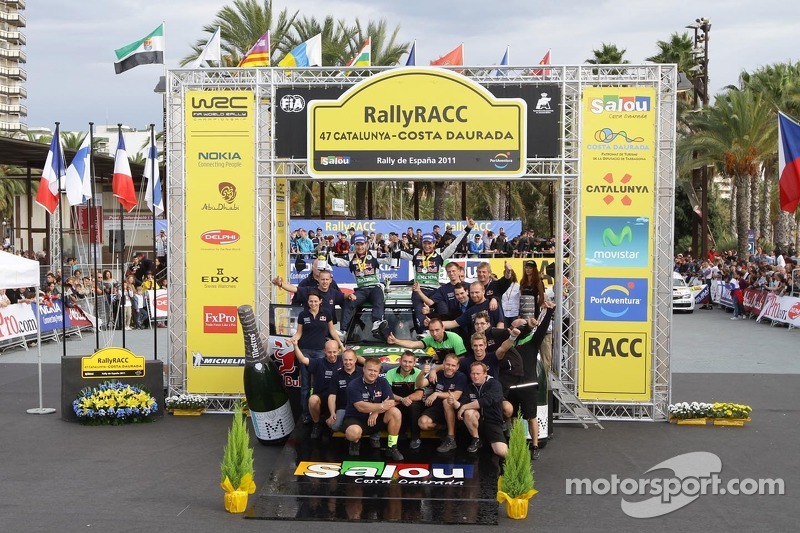 SWRC: Hänninen becomes Super 2000 World Rally Champion with victory at Rally de España*
*subject to the official publication of the results by the FIA 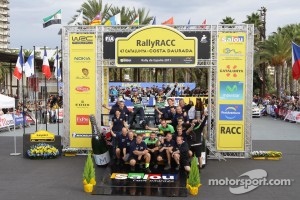 Hänninen began the event with a three-­‐point lead over Championship rival Tänak. Both drivers had high hopes for the rally with the Championship win in their sights. However the young Estonian’s title chances faded early when he hit a rock on the opening stage of the rally, breaking his Fiesta’s cross member and forcing him to retire for the day. He eventually restarted on Day Two, but successfully finished sixth, holding onto his position as SWRC runner-­‐up. With Tänak out of the running, Hänninen tackled the Spanish stages with his eye set on the prize taking an early lead in the SWRC, finishing the opening 25km stage a phenomenal sixth overall. However with his mind focused on the title he eased off, allowing 2011 Dakar winner Nasser Al-­‐Attyiah (Ford) to take the lead of the SWRC on SS5. Despite the Finn refusing to rise to the Qatari’s challenge, he put in consistently quick times and didn’t let his rival relax. After a difficult season, the 2006 PWRC winner was desperate for a good result on Spanish soil. Al-­‐Attiyah went off the road on SS10, his mistake reducing his lead to only 0.4 seconds over Hänninen going into Day Three. The final day of the event didn’t start too well for the Barwa WRT driver as he lost the brakes on SS13, the opening stage, forcing him to nurse his Ford Fiesta back to service to prevent further damage. This promoted Hänninen back into the lead, allowing him to seal the victory and putting him an impressive tenth overall to earn one WRC point at the end of this tricky mixed surface event. Al-­‐ Attiyah pushed to reclaim the top spot until the bitter end, but had to settle for a well deserved second place.

Prokop scooped the last spot of the SWRC podium after a difficult weekend. The Czech driver started the event confident of his pace on both gravel and Tarmac stages but after experiencing pace notes problems on the second loop of the first day then incorrect set-­‐up choices on Day Two he was unable to fight for the victory. Relentless as ever, Prokop wasn’t going to give up without a fight and chased Hänninen and Al-­‐Attyiah on Day Three, motivated to claim at least second position. Unfortunately, he couldn’t find the right rhythm to do so and had to settle for third.

Returning to the SWRC on a one off appearance, WRC Academy Cup contender Craig Breen (IRE, Ford) came to the event with the intention of gauging his pace compared to the Championship regulars. The Irishman, who made his SWRC debut last year at Wales Rally GB and immediately scooped a series podium by finishing second, showed incredible speed and proved he could battle with the frontrunners. He finished the opening day of gravel stages in third place, only 24.6 seconds off the pace of then-­‐leader Al-­‐Attiyah. A broken rear driveshaft on his Ford Fiesta on the first stage of Day Two cost the Irishman approximately 1 minute 30 second but he was delighted to be able eventually to finish fourth.

After his accident at Rallye de France earlier this month, young German driver Hermann Gassner Jnr (Škoda, Michelin) lacked confidence during on the opening day, but flanked by 2011 Dakar winning co-­‐driver Timo Gottshalk (DEU), he was soon back to his usual pace and set consistently strong times, even clocking one stage win in the process..

Albert Llovera (AND, Fiat Abarth) re-­‐joined the SWRC this weekend after missing the last two events due to severe tendinitis. He finished the event eight in the SWRC and for his tremendous achievements throughout the season as he tackles the WRC stages in a hand-­‐controlled Punto, the UNICEF Ambassador was honoured with the Abu Dhabi Spirit of the Rally.

1st – JUHO HÄNNINEN (FIN): “It’ll take me a few days really to realise what’s happened. It’s fantastic, I’m so happy, maybe I will dance on the roof of my car! I made a big mistake in France so I made my life difficult here in Spain, but now it feels very, very good to win the rally and the Championship.”

2nd – NASSER AL-­‐ATTIYAH (QAT): “It’s fantastic. It’s my first time in Spain, so it’s great to have such a good result. I was even leading the SWRC for two days. I’m so happy. I hope now you will see me back in the WRC next year!”

3rd – MARTIN PROKOP (CZE): “The season is over. I wish I’d had some different results. In the middle of the season it looked like I could win the Championship, but we lost the battle in Germany. Now I will try the WRC car out in GB – it’s a difficult car to drive and a difficult rally so I just want to see how it works.”

PWRC: Flodin back on top at Rally de España 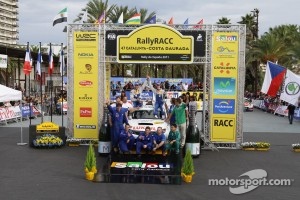 After a promising second place at Rally Australia in August, Michal Kościuszko (POL, Mitsubishi) hoped to claim his maiden PWRC win on Spanish soil. The Pole set the bar high by storming through the first stage of the rally but Flodin was more than happy to rise to the challenge. Renowned for his speed on gravel, the Swede blasted through the dust and, even with his engine running on only two cylinders on SS5, the last stage of the opening day, he was able to build a 35.9 seconds lead over second placed Kościuszko, sealing four stage wins in the process. Eager to get his first PWRC victory and take advantage of Flodin’s lack of confidence on Tarmac, Kościuszko flew through Day Two stages and closed the gap to 2.9 seconds by the end of the morning loop. Kościuszko was motivated to pass his rival on the afternoon stages but when he had to slow down after losing the brakes on SS12 his challenge for victory was postponed until the final day of the rally. Unfortunately it wasn’t meant to be for the 2009 JWRC runner-­‐up. Flodin was back on the pace on Day Three with his confidence high. He succeeded in keeping his rival behind him, but never to be defeated, Kościuszko showed phenomenal speed on the Spanish Tarmac and put Flodin under pressure until the very end. The two rivals were 2.3 seconds apart going into the Power Stage but it wasn’t enough for Kościuszko.

Encouraged by his fourth place at Rally Australia, Benito Guerra’s (MEX, Mitsubishi) aim for the weekend was at least to equal that result. After a promising performance on Day One, the Mexican focused on getting through the Tarmac stages unperturbed. He picked up a puncture on SS7, losing three minutes to change it, but was delighted that his pace wasn’t far off the frontrunners’, on SS9 even completing the stage 0.1 seconds behind newly crowned PWRC Champion* and stage winner Hayden Paddon (NZL, Subaru). Guerra set consistently strong stage times during the last day of the rally and successfully claimed the last spot on the podium, his best result to date.

Bader Al Jabri’s (ARE, Subaru) weekend was haunted by tyre wear problems and lack of grip but the young Abu Dhabian was keen to bring home a good result. Consistency ruled throughout the rally and with Tarmac not being his favourite surface Al Jabri was overjoyed to finish fourth, his best PWRC result so far.

After retiring on the opening day of the rally due to a broken suspension arm on his Mitsubishi Lancer and suffering gearbox problems on Day Two, Ukrainian driver Olexsandr Saliuk (Mitsubishi) drove an otherwise uneventful rally, to finish fifth in the PWRC. With his regular co-­‐driver Rubén Garcia stuck in Argentina due to a volcanic ash cloud caused an eruption in Chile, Peruvian driver Nicolás Fuchs (Mitsubishi) had to find a replacement at the very last minute, choosing WRC Academy Spanish co-­‐driver, Candido Carrera. Immediately in sync with one another, the pair were delighted to finish sixth on their first outing together.

Paddon had a difficult start this weekend. His Impreza wouldn’t start at morning service on the opening day due to throttle related electrical problems. Incurring 30 minutes of time penalties the Kiwi driver started Day Two in 14th place in the PWRC field but with his Impreza back on form he reminded everybody of his unquestionable pace by winning nine of the 12 stages he contested and eventually finished eight.
* subject to the official publication of the results by the FIA

1st – PATRIK FLODIN (SWE): “This is fantastic! It’s been a difficult season for me, so a victory here is great. I’ve found the Tarmac stages harder but I kept pushing and I will always give 100%. Now I would like another win in GB.”

2nd – MICHAL KOŚCIUSZKO (POL): “I'm very happy. Now I will fight for the position of PWRC runner-­‐up in GB. Paddon took the title in Australia, but there is still a lot to play for, I'm not giving up!”

3rd – BENITO GUERRA (MEX): “I'm really happy. It's my first podium in the PWRC, I've been working for this since the start of the year. We were really close in Portugal and again in Argentina, but we had problems with our car both times. Now we have a really good car. It's my best result ever in the WRC and within a podium under my belt now I can start thinking about winning an event -­‐ that's my next goal!”