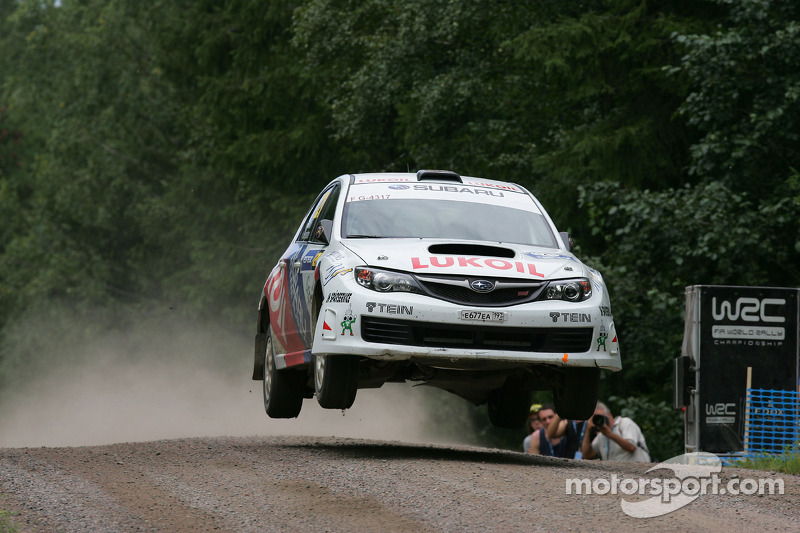 Flodin makes it two-­‐for-­‐two with a win in Wales 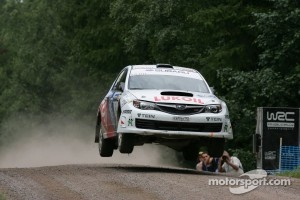 Flodin immediately set the bar high, taking the lead of the PWRC by winning Great Orme, the first 4.74km Tarmac test. But when it came to the gravel of SS3, the last stage of the opening section, Jarkko Nikara (FIN) flew past him, and despite driving a few corners without pace notes because his co-­‐driver’s light blew he set an impressive time, 23.5 seconds quicker than Flodin, promoting him straight into the lead of the PWRC with a 20 second lead over Flodin heading into Friday’s stages. The Scandinavians battled throughout Friday morning showing amazing speed until SS7 when Nikara spun, losing 20 seconds and falling back to second place. This promoted Flodin back into the lead but Nikara wasn’t going to give up without a fight and stayed close to his rival until disaster struck on SS11 when he hit a tree causing too much damage to his Mitsubishi to continue. With the Finn out of the rally and then third placed Michal Kościuszko (POL, Mitsubishi) retiring on the end of day road section to the Cardiff Parc Ferme due to electrical problems young Czech driver Martin Semerád (Mitsubishi) was promoted to second and Builth Wells native and PWRC guest driver Jason Pritchard (Subaru) to third. With a near three-­‐minute lead, Flodin’s only job was to keep his Impreza on the road and enjoy the beautiful Welsh stages, and so he did. The Swede safely brought his Michelin-­‐shod Subaru unperturbed to the finish, clinched the runner-­‐up title he had hoped for after a consistently strong season where he wowed the crowds with his incredible speed throughout.

The last spot on the podium wasn’t decided until the very last stage. When Pritchard retired with a broken radiator due to an heavy landing after a jump on SS16 – the second passage of the famous Sweet Lamb stage – young Mexican Benito Guerra (Mitsubishi) moved into third until he rolled his Lancer on SS23 which meant that Kościuszko, who had made up some of the time he lost -­‐ by winning 5 of the 6 Day Three stages -­‐ eventually took the last spot on the podium.

On his first outing at Wales Rally GB, consistency ruled the day for Nicolás Fuchs (PER, Mitsubishi) as he fought the adverse and treacherous conditions, improving his pace stage on stage and was delighted to finish in fourth place in the PWRC. Recently crowned 2011 Russian Rally Champion Dmitry Tagirov (RUS, Subaru) drove a consistent rally and eventually finished fifth while Majed Al Shamsi (ARE, Subaru), finished sixth despite hitting a a tree on SS7 and damageing his Impreza.

2011 Production car World Rally Champion* Hayden Paddon (NZL, Subaru) switched his Group N Impreza for the new R4-­‐spec of the car for Wales Rally GB. Despite this being an event counting towards the PWRC, Paddon skipped the round under the regulation that says that a driver shall be excused from participation in a nominated event when contesting the rally concerned as either a Priority 1 or a Priority 2 driver. Overcoming the adverse conditions of the Welsh stages, the young Kiwi eventually finished the rally in 13th place, second in the S2000 class.

1st – PATRIK FLODIN (SWE): “I’m so, so happy! I’ve came here hoping for a victory and I did it. Winning two events in a row and finishing second in the PWRC is a very good end to this season. On Saturday it was quite difficult to concentrate as I had quite a big lead and nobody to fight with but then this morning I relaxed a bit more and I really enjoyed the stages.”

2nd – MARTIN SEMERÁD (CZE): “This was a long and difficult rally but finishing in second place is fantastic. We came here hoping to get the PWRC runner-­‐up but when we saw Flodin’s pace we understood that it was going to be very tough so we drove a consistent rally and I’m very happy to finish third in PWRC.”

3rd – MICHAL KOŚCIUSZKO (POL): “Coming third after this eventful weekend is very good. We were quite in a confortable place until we had to retire on Friday night on the way to Cardiff but today we really pushed hard and won five stages so we showed that we have the speed.”

News Update
Following technical scrutineering the stewards ruled that Car 26 driven by Martin Semerád (CZE, Mitsubishi) was excluded from the PWRC in Wales Rally GB due to its upper suspension plates failing to conform to technical regulations.