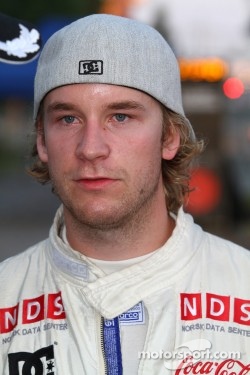 Fresh from a podium position at last weekend’s ADAC Rally Wartburg where Burkart piloted the Ford Fiesta S2000, the 28-year-old German driver is feeling confident ahead of his debut in the Ford Fiesta RS World Rally Car.

Burkart – who will be partnered by fellow countryman André Kachel - will be looking to benefit from a pre-event test over the weekend where the duo aim to finish with a top result on their debut World Rally Car event.

Norway’s Mads Østberg will also be testing the team’s other Fiesta RS WRC over the weekend. The 23-year-old has not driven a World Rally Car on asphalt since 2008 so is hoping to find a good set-up on the new surface before the ninth round of the WRC.

Østberg and co-driver Jonas Andersson contested last year’s ADAC Rallye Deutschland for the first time in a Ford Fiesta S2000 where the pair finished first in class and 16th overall. Østberg has since reported his desire to challenge for a second podium during the season’s second half but his main aim for the Trier-based event will be to match the pace of the WRC front-runners.

Joining Østberg as the second points-scoring crew in Germany is Britain’s top pairing of Matthew Wilson and Scott Martin. Wilson has proved his ability behind the wheel of a Ford Fiesta RS WRC with two top five results already under his belt this season.

Wilson finished sixth at last year’s event and will be aiming for a similar result this year. The 24-year-old English driver will be looking to further benefit from a test he has planned in the Ford Fiesta RS WRC on Monday.

Henning Solberg and co-driver Ilka Minor will be the fourth team entered under the M-Sport Stobart banner in Germany.

Solberg will be the only M-Sport Stobart driver who will not test the Fiesta RS WRC prior to the event but the flamboyant Norwegian has experience on his side as next week’s event will mark the ninth time that the driver has contested the German edition of the WRC.

As one of the most experienced WRC drivers in the field, the M-Sport Stobart driver will be looking to take advantage of his past knowledge of the German roads in order to move ahead of Räikkönen in the overall leaderboard – Räikkönen and Solberg are currently tied in the drivers’ championship standings with 26 points each.

“It’s possible that Germany may be my last event of the season so I want to aim for a top result next week. It’s going to be difficult as it’s my first time driving on asphalt in a World Rally Car since Corsica and Spain in 2008. I competed in last year’s Rallye Deutschland and Rally Catalunya in a Ford Fiesta S2000 so I had some experience during those events but it’s very different behind the wheel of a World Rally Car. I’ve got a test planned for the weekend and I’m hoping that I can find a good feeling in preparation for the rally. I think it’s going to be a tough event but I hope to be where I was on the last day in Finland, I just need to be pushing from the start and it’d be great to challenge the “top five” more on this rally.”

“Germany will be the first time this year that tyre choice has come into the equation so I think this could be one of the biggest challenges. Of course it is also the first all-tarmac round of the season so it’s a big step into the unknown for the Fiesta RS WRC although we will be fortunate to fit in some testing on Monday afternoon. I enjoyed the small sections of asphalt we’ve had already this year like in Rally Argentina but that is nothing compared to three full days of rallying on the surface. Last year was a good result for us and I’d be happy if I finished in a similar position this time but this is a tough rally and small mistakes can have brutal consequences so it’s important to know when to push.”

“We need to collect points and the aim is for a good result next week. The best way for me to achieve this is to concentrate on improving my performance from last year when I competed in the Fiesta S2000 and to get closer to the top guys’ times on asphalt. I like the more open road stages like there are in Germany but find it difficult on the military ranges. I need to feel the car flowing and on those stages it is very stop and start and you can’t really get into a good rhythm. Rallye Deutschland is like three different rallies in three days over different types of stages and each with their own unique challenges. As always the weather here can also make a big difference.”

“I can’t wait for next week but I’m starting to feel a little nervous now too. It’s such an amazing opportunity to drive a World Rally Car and on my home event it is really something special. I’d like to finish on the podium but I’m aware that there’s 20 World Rally Cars in Germany so it’s not going to be an easy task. We’ve got a test in the car over the weekend so we need to make sure we find the right set-up so we are as well prepared as we can be. We’ve had some good results in the Ford Fiesta S2000 already this year but I know that the Fiesta RS WRC has a lot more power so we need to take this into account when first getting to grips with the car.”