Sebastien Loeb has earned the 2011 crown in the World Rally Championship season finale. The Citroen ace ended the second day of the Wales Rally GB competition with a one second lead over his closest rival for the victory. Jari-Matta Latvala sits second but the real drama happened to his Ford teammate.

Mikko Hirvonen hit a tree stump that was buried, and thus hidden in the bank that the Finn slid into. The radiator was damaged, forcing him and Jarmo Lehtinen to retire from the event. Per the Ford press release: “Despite heroic efforts from the Ford Abu Dhabi mechanics to enable Hirvonen to restart tomorrow under SupeRally regulations, the damage was too great and he retired.”

Before the official news that his rival for the championship was out of the event, Loeb said at the end of today’s leg: “For sure we are in a good situation at the moment after Mikko’s problems. We are waiting a bit now to see if Mikko restarts or not tomorrow. If he does not restart then we are world champion and after that there will be no pressure. But now Jari-Matti is one second behind so it’s going to be very close.”

Prior to their heart-breaking moment, the duo had taken the lead which was vital for their title hopes. Explained Hirvonen, “I spun, which at first felt like a typically harmless Rally GB incident. I had a big slide and the rear of the car hit a bank. The front also touched the bank, hitting a tree stump and puncturing the radiator. I continued for another 5km but didn't realise the engine was slowly losing water, causing big damage.”

Loeb and Daniel Elena have now notched their eighth consecutive WRC crown and no doubt will push as hard as they can on the final two days yet to contest. On Sunday, Loeb and Elena would like to close out the season with the victory and earn their fourth consecutive Wales Rally GB victory.

Once the Frenchman learned that his rival, again, for the WRC championship was out of contention, he commented: “Obviously, I’m much more relaxed now, but we’ve still got two days racing to go. Even if I lost time this afternoon as I was awaiting confirmation of Mikko’s retirement, I’m still leading the rally and I said to myself that it would be good to end the season with a victory. If I feel good in tomorrow’s stages I’m going to try and score my fourth consecutive win in this rally!” 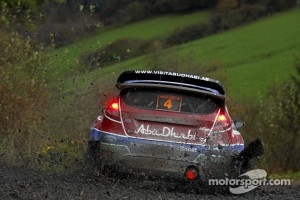 Latvala still has a shot at handing Ford the victory. It was not an easy day due to the fog and mud for any of the competitors and to top it off, Latvala was feeling under the weather but he kept pushing and hopes to feel better tomorrow.

“I wasn't on my best form this morning,” admitted Latvala. “I've had a headache all week which I think is coming from a nerve in my neck. I wasn’t able to relax and felt tense. I visited the physio and instantly felt better, so I was able to push and put pressure on Loeb to close the gap. I tried to take the lead to ensure the best road conditions tomorrow, but I just needed a few more kilometres.”

Mads Østberg sits third but unless the top two break down or crash out, neither he nor those who follow him have a chance at the win. The M-Sport Stobart driver is two positions in front of team mate Henning Solberg. Ott Tänak was a surprise as he sits sixth in his debut in the Fiesta RS WRC. Fourth belongs to Petter Solberg in his privateer Citroen. Kimi Räikkönen in another privateer Citroen holds seventh followed by MINI of Kris Meeke.

Tomorrow will see them challenge one another in the third leg before the final fight of the year on Sunday between the Ford factory team and their rivals from the Citroen camp. Missing will be the Finn who again gave it all he had to top Loeb in the championship fight.

“It's a huge disappointment. The team worked so hard throughout the year. It was a fantastic effort from everyone, including Jari-Matti who supported me so much towards the end of the season. We did all we could to get into a position where we could still fight for the title and it's such a shame it ended like this,” said Hirvonen. 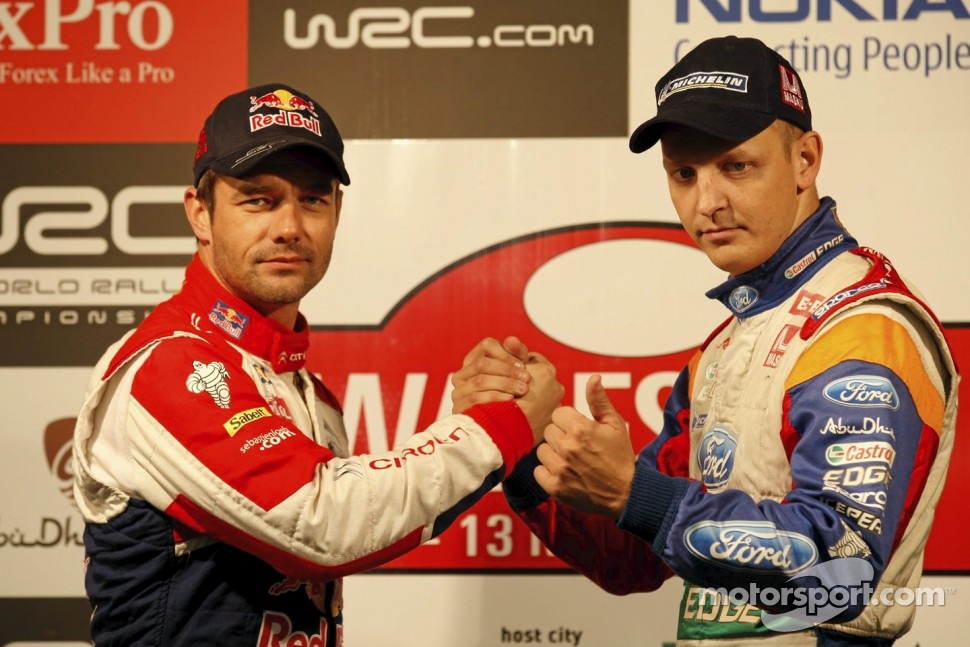 Raikkonen explains run-in with "pissed off" Sainz in Bahrain