WRC Japan: Neuville on course for victory after Evans puncture

Thierry Neuville is on course to head a Hyundai 1-2 at Rally Japan after Toyota’s Elfyn Evans suffered a puncture that effectively ended his World Rally Championship victory hopes.

Overnight leader Neuville came under pressure from Evans on Sunday morning as the Belgian witnessed his 4.0s lead reduced to just six tenths of a second.

However, a puncture on the morning's second stage cost Evans almost two minutes, dropping the Welshman to fourth.

Suggestions of incoming inclement weather put pressure on the WRC weather crews before the first group of morning stages.

Hyundai elected to play it safe covering all options with Neuville and Tanak taking two tyres from each of the hard, soft and wet compounds. Toyota gambled on the rain failing to arrive as Evans took three hards and three softs.

Overcast but dry conditions greeted the drivers for the first stage which was dominated by a charging Evans.

The Toyota driver blitzed the 7.52km pass through Asahi Kougen, taking the stage win by 2.3s from team-mate Ogier.

“A bit hairy in that first part! It's so fast and pretty patchy damp, so hard to judge the grip. Otherwise, it was fine,” said Evans.

Neuville was unable to match the pace and dropped 3.4s in the process knowing he would lose ground owing to the soft tyres he was running. His lead was reduced to 0.6s over Evans following Stage 15.

“I'm not surprised. With the two softs on the rear, we know we're going to lose some time in the upcoming stages," said Neuville. "Once the rain comes, with the wet tyres we should be much quicker. I am relying on the information of the team and according to that there will be a lot of rain.” 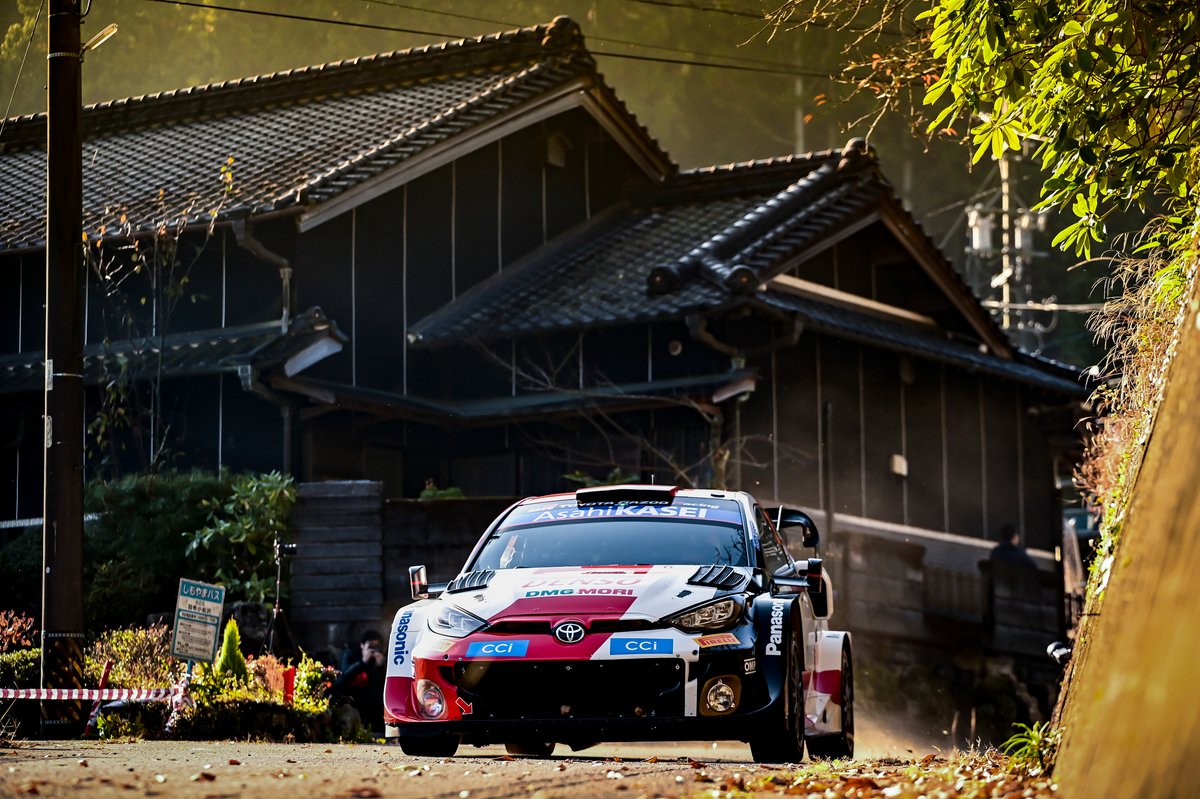 Neuville didn’t need to rely on the rain to maintain his lead as Stage 16 (Ena City 21.59km) effectively killed the intense fight for the victory with Evans.

Evans ran slightly wide at a right hander and picked up a puncture which resulted in a loss of 1m46.7s to change the wheel. The tyre failure dashed his hopes of claiming a first win of the season, dropping him to fourth overall.

"I was probably a tad wide in a right-hander,” said Evans. “The notes were correct but I didn't get them as early as I needed to slow the car down in time. There was nothing I could do."

A stage win for Neuville added to the Belgian’s advantage that increased to 1m02.1s over team-mate Tanak, who moved into second overall as Katsuta moved to third.

The final stage of the group was won by Ogier as the Frenchman swept to his fifth fastest time of the rally, completing the test 4.6s faster than the recovering Evans and Katsuta, while Neuville was fourth quickest.

Rally Japan will conclude after a further two stages, featuring second passes through the Ena City and Asahi Kougen tests.