Rivals over past years are now team mates; Ogier out of Citroen ride

News came from the Citroen World Rally Championship team this morning and for some it was a surprise while others knew that a change was pending. The team released Sebastien Ogier and his co-driver Julien Ingrassia from their contract early. Ogier’s contract was to end with the championship team at the end of the 2013 season.

Citroen also announced the signing of Ford’s driving combo of Mikko Hirvonen and Jarmo Lehtinen. Over the past several years, the now former Ford duo were the main challengers to steal the championship out of the hands of Citroen’s top combination. Loeb and Elena notched their eighth consecutive championship this year. Hirvonen and Lehtinen finished second in 2008, 2009 and 2011.

With the addition of the Hirvonen and Lehtinen, Citroen is confident that the manufacturers’ title, along with the drivers’ championship will continue to be firmly in their hands over the next two WRC seasons.

They’ve been our toughest rivals over the last four seasons

Olivier Quesnel, Citroën Racing Team Principal said in the press release: “We’re very happy to welcome Mikko Hirvonen and Jarmo Lehtinen. They’ve been our toughest rivals over the last four seasons and we’re really looking forward to our future collaboration. Mikko is a talented driver and his consistency will be a big help in our fight to retain the manufacturers’ title.”

In 2009, the championship came down to the season finale in Wales with Loeb besting Hirvonen by a mere point. Loeb and Elena had seven wins and Hirvonen and Lehtinen had a total of four and while they both had one retirement that season; the Finns had more 2nd and 3rd place podiums than the French aces. The gap in 2008 was larger (122 to 103) as Loeb and Elena were reeling in the wins as they amassed a total of 11 out of 15 events that year. Hirvonen and Lehtinen took two victories that season.

This year they headed to the Wales Rally GB for the title fight to end the 2011 season. Ironically they both retired which in itself was a shock. Loeb and Elena had five wins while their main Ford rivals had just two as both of their team mates (Ogier – Citroen and Jari-Matti Latvala – Ford) were also scoring victories during the 2011 season.

Why Ogier was let go was not stated but during the season, he did express his unhappiness due to team orders. While he did run selected events in 2010, his first full season was this year and he and Ingrassia ended third in the championship with five wins; which helped Citroen earned the WRC Manufacturers’ title.

“Seeing Sébastien Ogier and Julien Ingrassia leave strikes a particular emotional chord in the whole team. Citroën Racing trained them, first of all in the JWRC and then in the Citroën Junior Team and the Citroën Total World Rally Team,” said Quesnel,

Loeb and Elena celebrated their 8th consecutive championship with 222 points over Hirvonen and Lehtinen ended with 214. It will be interesting to see how the two fare next year as rivals within the team structure. Will there be rules or will it be an all-out fight for the WRC wins?

Frédéric Banzet, General Manager Citroën Automobiles: “I’d like to take advantage of this occasion to repeat my congratulations to the whole Citroën Racing team for their 2011 titles, as well as Sébastien Loeb and Daniel Elena for their eighth consecutive crown.

“Today, I’d like to welcome Mikko Hirvonen and Jarmo Lehtinen who are joining us to continue Citroën Racing’s sporting adventure and its determination to score more victories starting with the 2012 Monte Carlo Rally,” added Banzet.

Between the two driver combinations, the have amassed 81 WRC wins with Loeb and Elena having 67 but the French duo have been active since 1999 and the Finns started in 2002. The numbers of podiums they both achieved is amazing at 153. 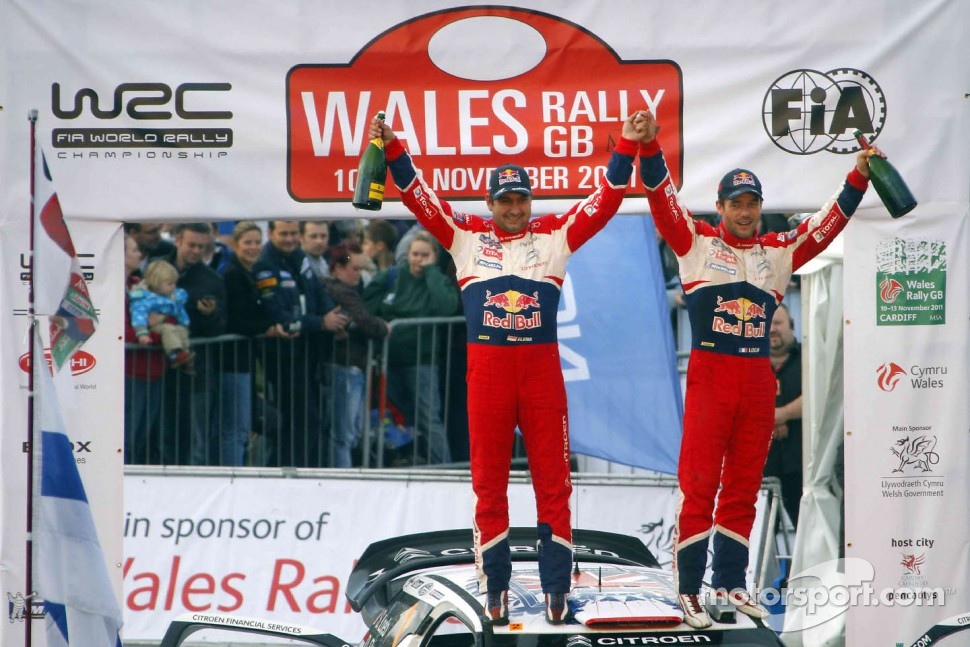 Sebastien Loeb - The Most Successful Man In Motorsport History