Take a bow, Kalle Rovanpera. The 20-year-old Toyota driver earns our top performer award after becoming the youngest ever driver to win a WRC event with a sublime performance across the four challenging days and 24 stages.

Those inside rally circles have been predicting great things from the son of former SEAT, Peugeot and Mitsubishi factory WRC driver Harri Rovanpera, and in Estonia he truly lived up to expectations.

Although very much at home on Estonia's roads, Rovanpera at times was in different league as he cooly swept away a Friday challenge from Hyundai's Craig Breen to win in a calm but dominant fashion by 59.9s.

The turning point came in Saturday's opening stage. There, Rovanpera annihilated the opposition using his devastating speed, coupled with thorough pace notes, to defeat 2020 Estonia winner Ott Tanak by 10.7s. The Finn more than trebled his rally lead over Breen who, like many, was in awe of what Rovanpera had achieved. It was one of the drives of the season.

"It was very impressive and something very special," said Breen. "I honestly did my best stage that I could. Once [Rovanpera] had done that, it was a different objective for the rest of the weekend. Hats off to him."

Breen was a close second in our top performer rankings, after seeing off full-timers Thierry Neuville, Sebastien Ogier and Elfyn Evans in what was his first gravel event in WRC car for a year.

But the way Rovanpera pushed when he needed to and drove with maturity to seize victory - plus the decade-old youngest-ever winner record from Toyota boss Jari-Matti Latvala - is hard to top. 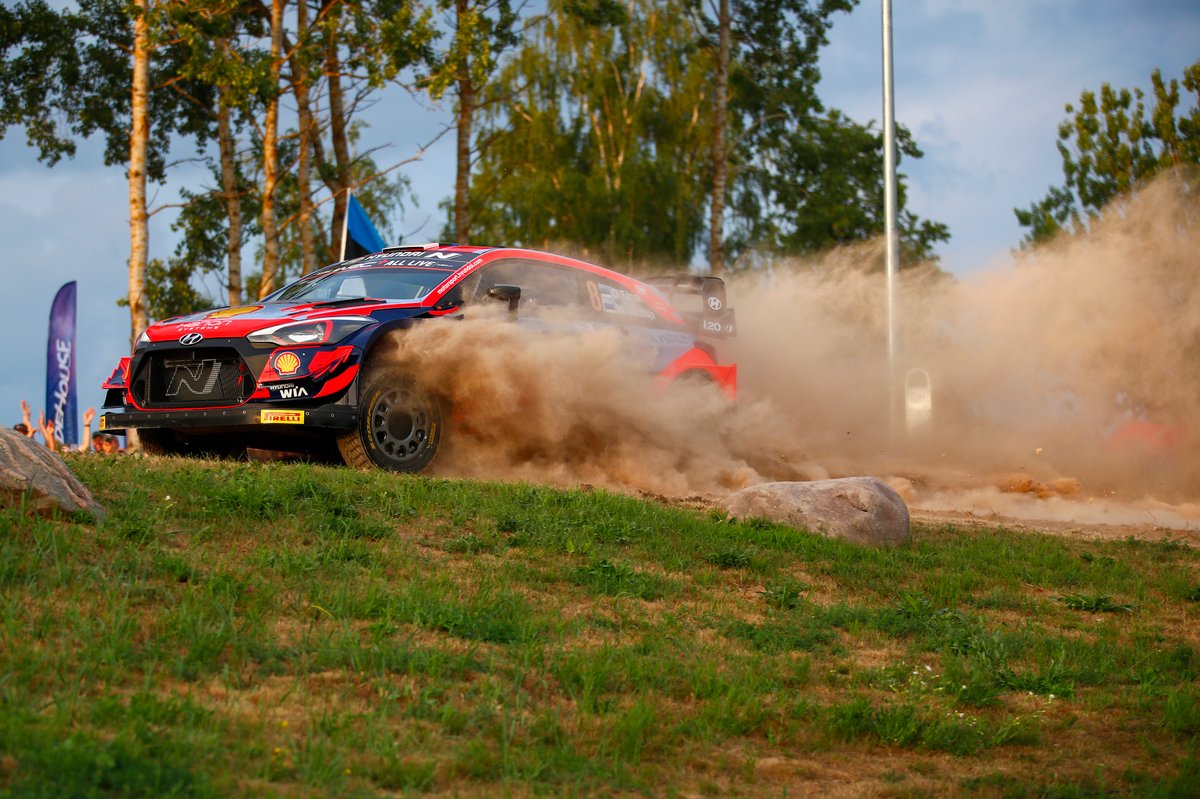 You could almost hear the collective groan of a nation when Tanak retired from the rally on stage 4.

The 2019 world rally champion is one of the most famous people in the entire Baltic nation. To illustrate this, months before clinching the world championship a newly-released movie about his life smashed Estonia's box office records with more than 50,000 seeing the film inside the first month.

As a result, the Tanak army was out in force over the weekend as they threw all their support behind the Hyundai star.

However, hopes of a home victory were dashed when three punctures in the space of two stages ended the dream to 'bring rallying home'. After fitting his only spare following the first puncture, Tanak ran wide on a right-hander in the next stage and picked up a further two punctures - his faltering title aspirations likely now extinguished for good.

It robbed the neutral of what would have been a classic fight between Tanak and Rovanpera for the victory, as evidenced by the Estonian adding 10 more fastest stage times to his record when he returned under restart rules.

On reflection, Tanak's wild moment in stage 4 was actually an impressive save from an even bigger accident, as captured by this fan.

Being told to slow down, when there is no need to, will aggravate any competition driver.

So you can imagine Breen's reaction on stage 4 when a marshal stood in the middle of the road to slow the Irishman - fighting for the lead - despite the danger ahead being well clear of the road. Safety is of course paramount, but it was a bit overkill in this case.

M-Sport's Gus Greensmith had pulled off the road due to an engine issue on his Ford Fiesta, that ultimately spelled retirement.

Breen was fuming, but credit here goes to co-driver Paul Nagle who managed to calm his driver and prevent further time loss to keep their victory bid on track.

"I went into road mode and everything, and saw someone at the top of the crest but the car was pulled in," said Breen. "People need to be switched on – if it's not a danger then don't f****** worry about it."

Luckily the officials saw sense and awarded Breen a notional time that left him only 0.2s adrift of the leader Rovanpera. 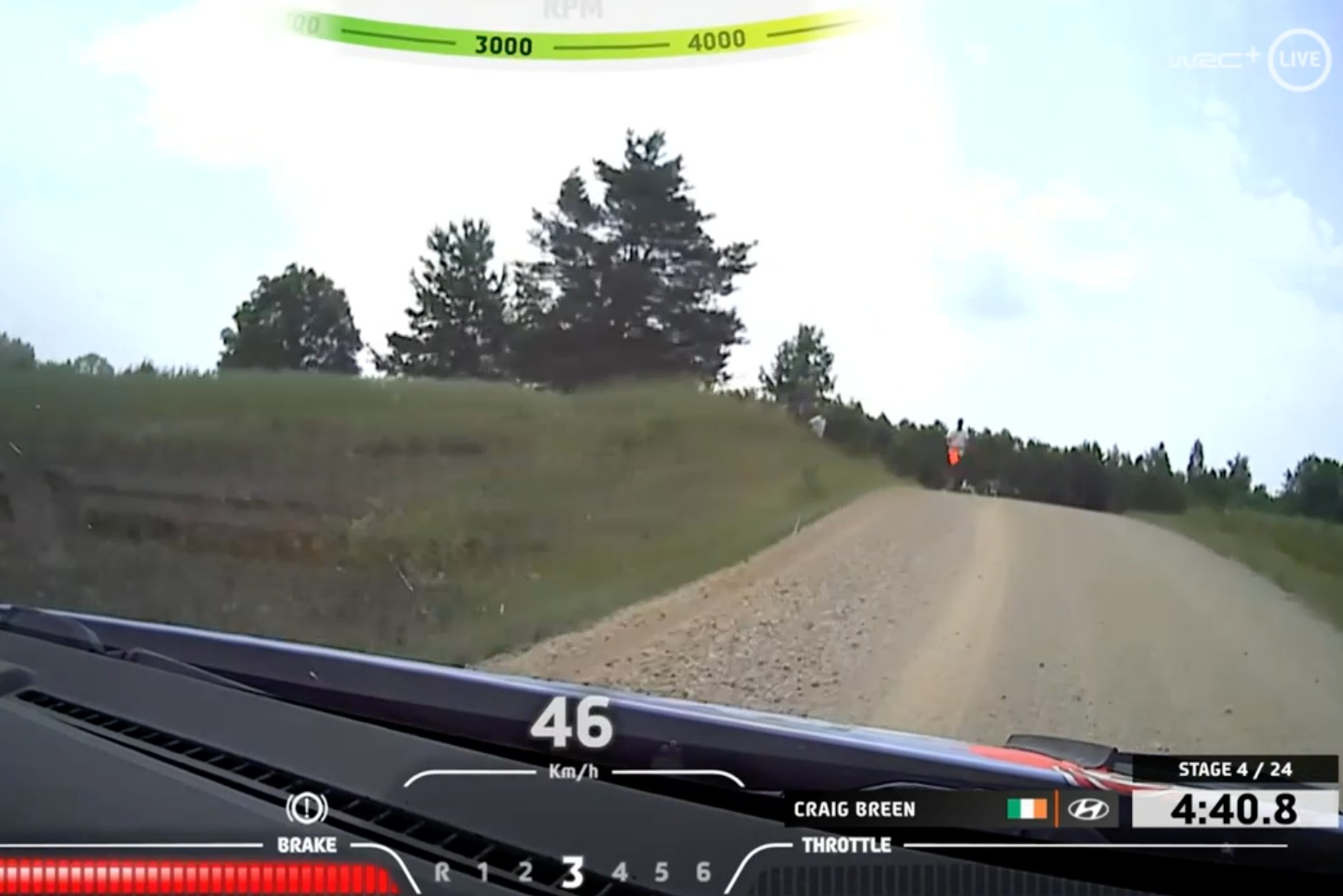 teammate Neuville also had a moment of anger when a faulty starter motor prevented his i20 Coupe from starting twice, ensuring he was late to the penultimate stage and resulting in a 10s penalty.

The problem didn't rob him of his third place finish, but he and co-driver Martijn Wydaeghe were clocked at 190km/h (120mph) in a 90km/h (55mph) road section trying to make the time up. It resulted in a a suspended one event World Rally Championship ban and a €2500 fine.

WRC's unique sense of adventure through towns, countryside and some of the wildest terrain can throw up many unusual images. However, people skiing while WRC cars blast by during a 30 degree heatwave has to be a new one for the list.

An addition to that list of unusual sights is the decision to factor in an augmented reality character virtually cheering drivers on stage side in the live television coverage. This is Kalevipoeg, a mythical giant from Estonian folklore (apparently).

Team bosses always want their drivers to be prepared, but WRC2 star Mads Ostberg took that to another level by bringing a set of dampers in his carry on luggage.

If you ever need reminding why we go racing, this victory celebration posted by Toyota boss Jari-Matti Latvala is a perfect reminder.

Here are our top four hot shots from Rally Estonia. 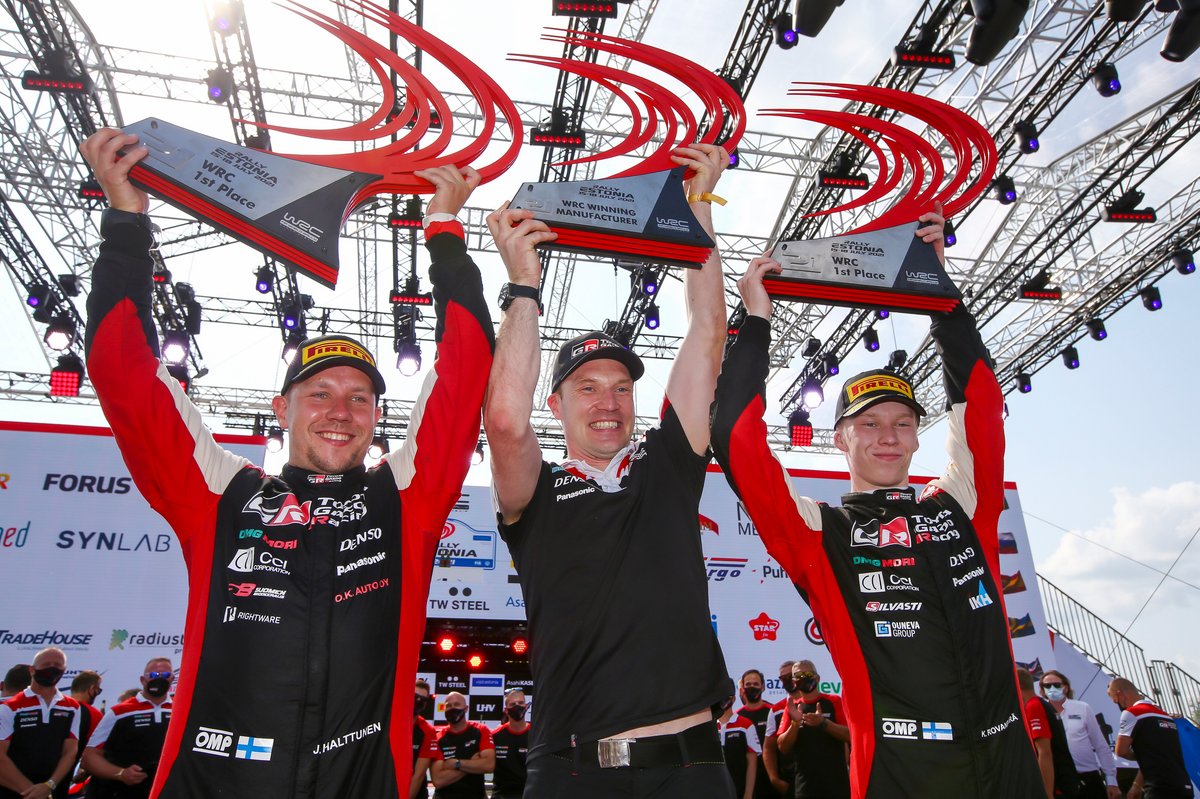 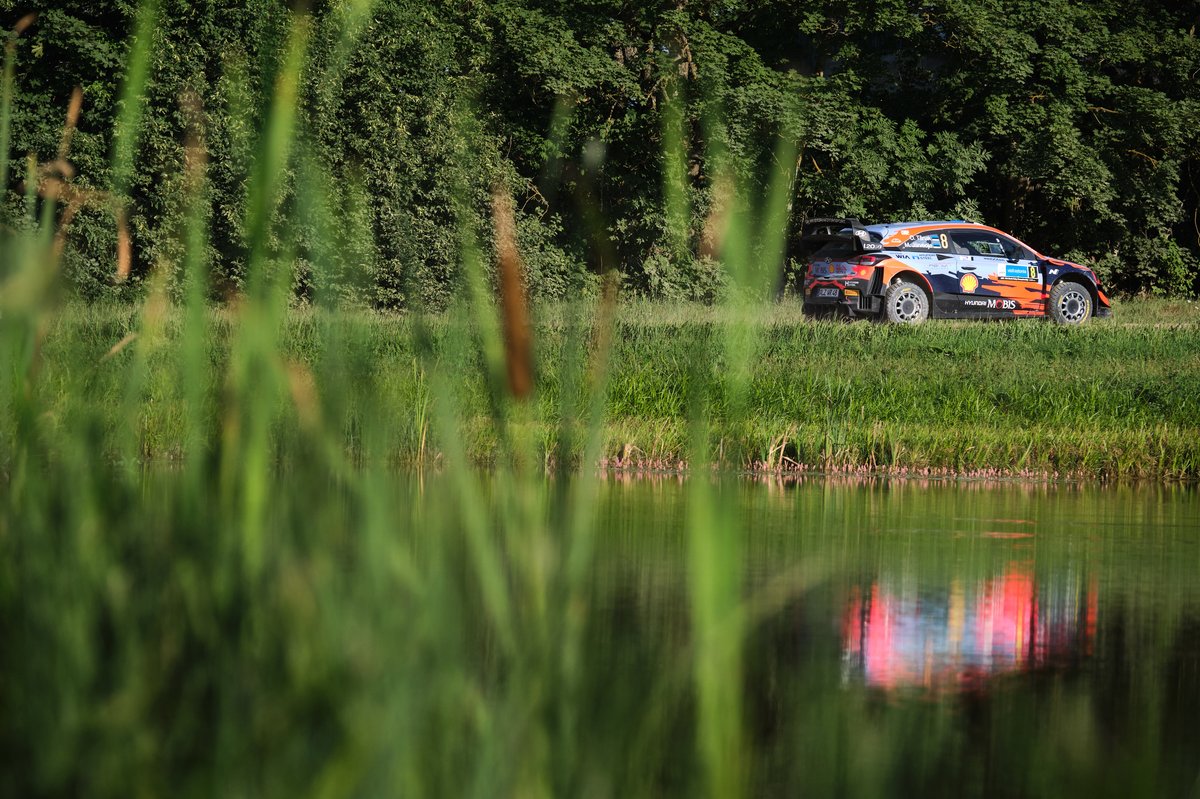 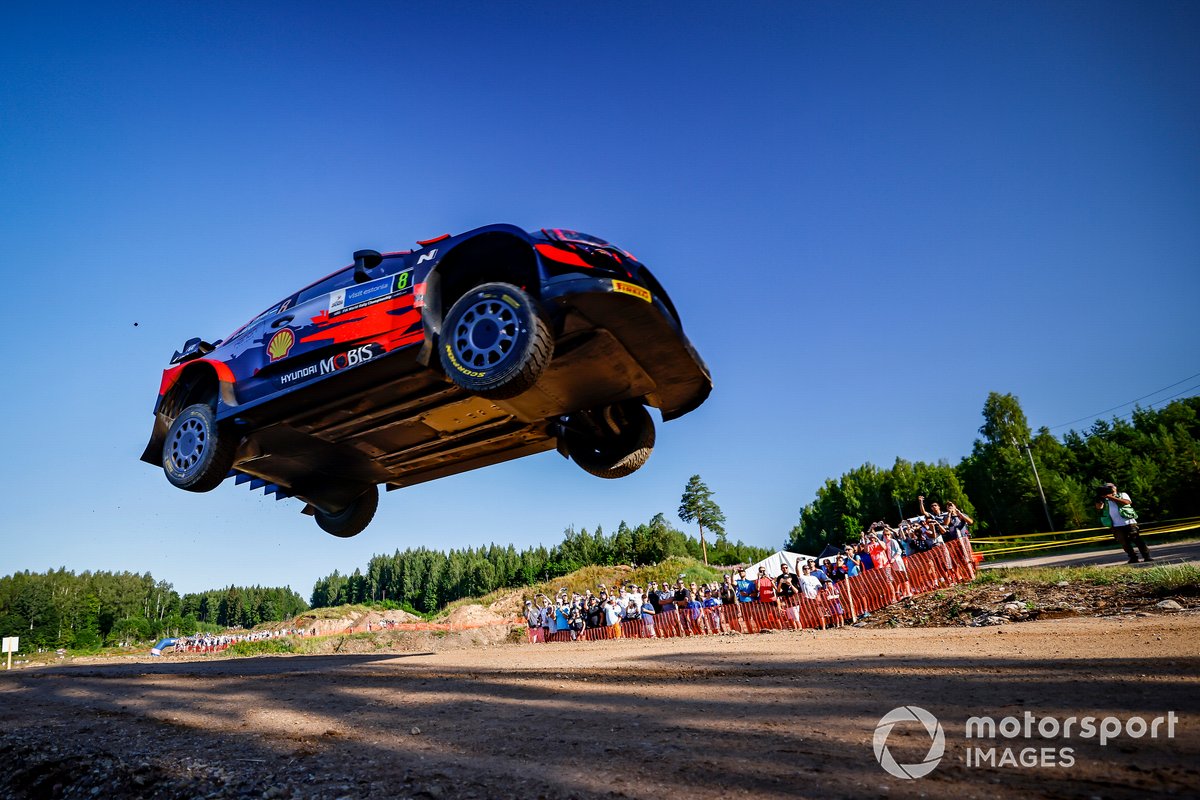 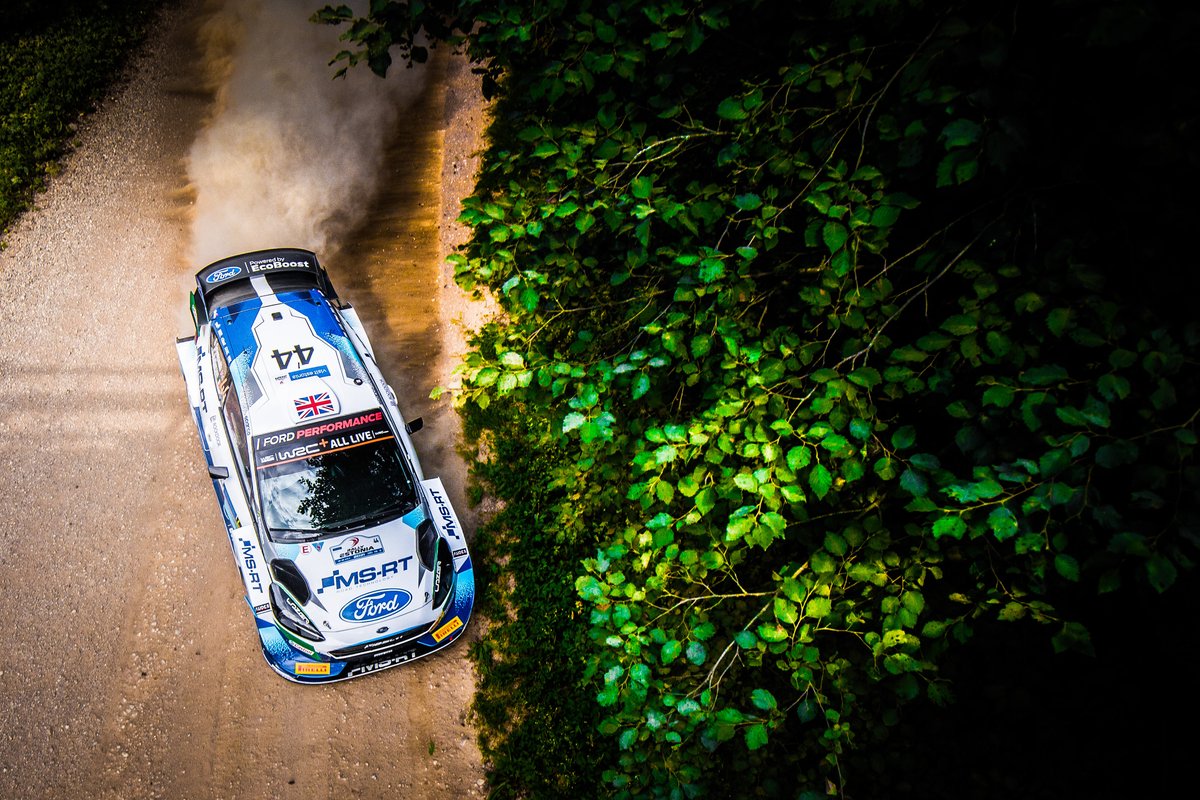 Here is Kalle Rovanpera hard at work on his run home to a history-making victory.