Kalle Rovanpera extended his lead over Elfyn Evans as the World Rally Championship points leader closed in on victory at Rally Estonia on Sunday morning.

Rovanpera continued his charge as the Finn picked up a hat-trick of stage wins to hold a 40.8-second lead over Evans with three stages of the gravel event remaining.

Hyundai’s Ott Tanak managed to share a stage win with Rovanpera as the Estonian held onto third, 1m19s adrift, with teammate Thierry Neuville a further 1m26.4s back in fourth.

Toyota's Takamoto Katsuta is on course to finish fifth ahead of M-Sport’s Adrien Fourmaux, now the sole remaining Ford in the points, after Pierre-Louis Loubet and Gus Greensmith were forced to retire.

Blue skies greeted the drivers but the remnants of Saturday’s rain were evident in the form of large puddles on the day’s opening stage, a short 6.5km technical test.

Rovanpera picked up where he left off on Saturday by taking an 11th stage win of the event as he pipped nearest rival Evans by 0.7s.

Off the back of his stage win in Saturday’s last test, Fourmaux set the third fastest time as he took 3.2s out of Katsuta as the gap in the battle for fifth overall came down to 7.7s.

The Rally1 field successfully completed the stages apart from M-Sport’s Loubet, who hit one of several large rocks lining the road, which caused severe damage to his Puma’s front-left suspension.

Loubet managed to limp to the stage end losing a minute in the process, but the damage was too severe to continue and, without a mid-point service, it was game over. As a result, teammate Greensmith took over eighth overall in the rally standings. 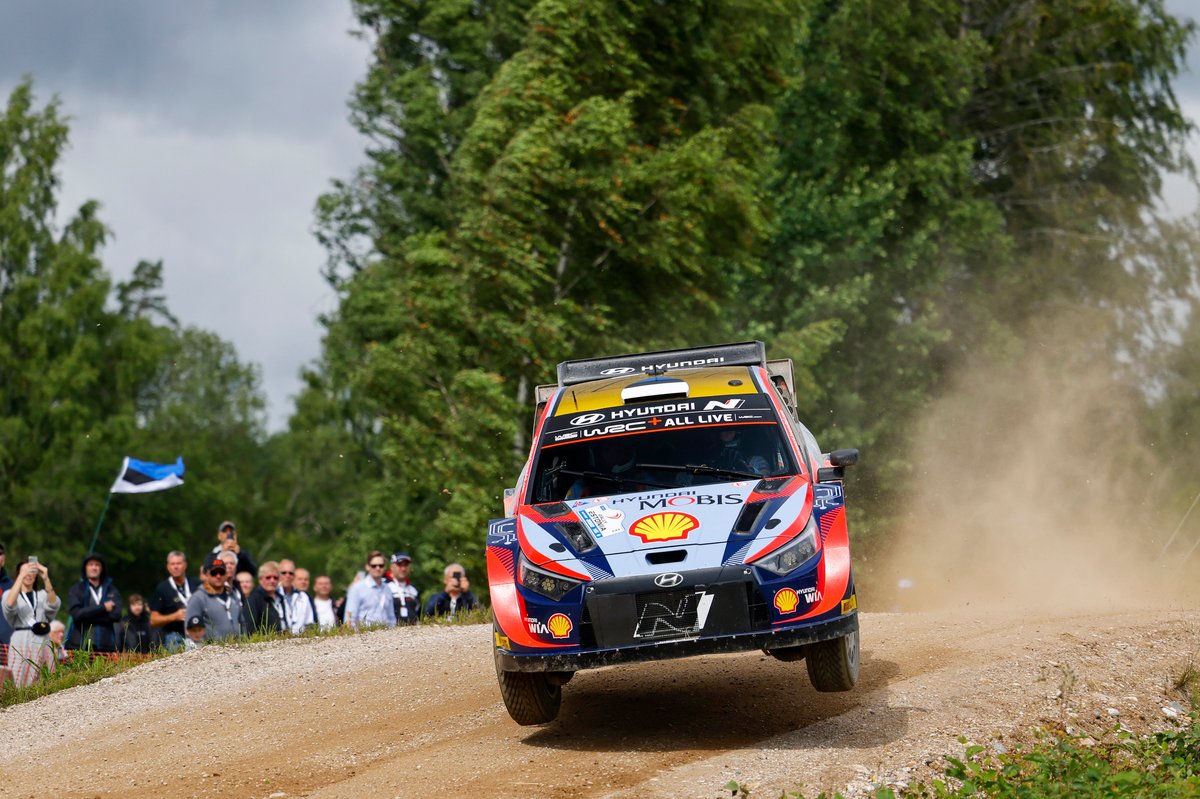 Rovanpera continued his momentum into stage 20 but, on this occasion, he shared the stage win with Tanak as the pair posted identical times.

Despite the impressive pace, Tanak was far from happy with his i20 N.

"There are many fundamental things that didn't go right [during the car's development] and now we are having to progress them as we go," said Tanak.

Rovanpera dropped some time when he ran slightly wide on a section that caught out several drivers, including Evans, who dropped 9s to a 360-degree spin.

Katsuta, Fourmaux and Hyundai's Oliver Solberg also endured wild moments where Evans spun, with the latter dropping the most time as he slid sideways into the grass.

"I came in a bit hot, but the rear snapped away violently under braking," said Evans. "It was better to let it spin because we had plenty of space."

Fourmaux’s moment meant the Frenchman lost 5.2s in his pursuit of fifth.

However, there was further drama for M-Sport in the form of a second retirement in as many stages as Greensmith was forced out of the rally due to a transmission issue.

Rovanpera completed a perfect start to Sunday by claiming a 13th stage win of the event, pipping Evans by 2s on the Kambja test, which will act as the rally-ending powerstage later on Sunday afternoon.

Tanak was again third fastest but his team-mates Neuville and Solberg suffered wild moments as they straggled for grip.

Neuville was lucky to avoid significant damage when he ran wide at a left-hander and went through the bushes.

"I got caught in a mid-speed left-hander, I went a bit wide and lost the rear - I couldn't do anything," said Neuville.

"We need to work on the seat somehow - it completely moved and now I am sitting offset from the steering wheel."

Solberg suffered his second spin of the day but was able to resume having dropped a couple of seconds.

In the battle for fifth, Fourmaux conceded the fight and backed off having witnessed two of his team-mates retire.

A second pass of the morning stages will conclude Rally Estonia on Sunday afternoon.