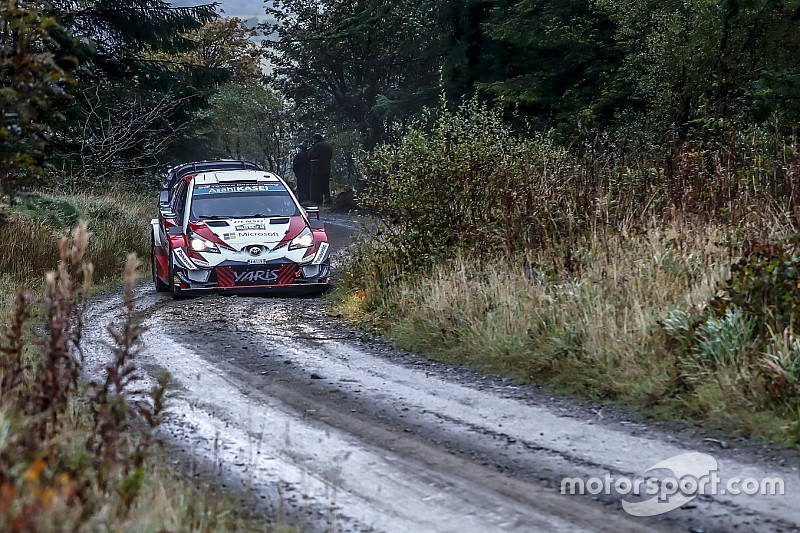 Tanak crushed his opposition with three stage wins in a row to start the day.

Crucially, he took victory on the the longest stage, Brenig, by a decent margin as his title rivals Sebastien Ogier and Thierry Neuville then hit trouble on the following stage.

Tanak's advantage was boosted by two spins for Ogier as a gearbox problem meant he lost first and second gear.

Hyundai's Neuville lost around a second by overshooting the corner of a junction "a little bit", and had no answer to Tanak.

Neuville would hit back on the two short Slate Mountain runs - affected by heavy rain, fog and loose stones - winning the first stage to claw time back to Tanak, whereas Ogier fell further away from his two rival title contenders.

Citroen-bound Ogier finished the first run over three seconds slower than the duo and last of all WRC runners.

He then lost further time on the second Slate Mountain run to fall to seventh overall, leading Ogier to call his morning a "disaster".

The M-Sport Ford driver heads to the service park for repairs after falling 27.9s away from Tanak's pacesetting overall time.

The 2017 Wales Rally GB winner Elfyn Evans finished the morning loop second overall, 8.9s off, after proving to be the only driver able to get within three seconds of Tanak on the long Brenig stage.

Evans could potentially have gone faster if not for some flashing lights on the dashboard of his Ford that proved both distracting and a false alarm.

Toyota's Jari-Matti Latvala put some pressure on Evans by finishing a close second to Tanak in the fourth stage, Penmanchno, and followed that result with two strong Slate Mountain runs, winning the second attempt to trail Evans by 6.5s in third overall.

Teemu Suninen was fourth ahead of Neuville, with the struggling Esapekka Lappi recovering from a lack of confidence in his Toyota to haul it into sixth.

Citroen's Mads Ostberg was eighth behind Ogier, with Hayden Paddon and Andreas Mikkelsen rounding out the top 10.

Rising star Kalle Rovanpera stunned the WRC2 field with a Brenig run that was 23.7s faster than the second-quickest car in the stage driven by Tom Cave.

He holds a comfortable margin of 37.9s over Skoda's Pontus Tidemand heading into the afternoon.

Several drivers complained of understeer and changeable grip through the early stages, with Latvala one to suggest that pre-event testing had not matched the rally's conditions.