Sebastien Ogier has labelled his unexpected Rally Sardinia victory as “special” and one that ranks “pretty high” in his glittering World Rally Championship career.

The seven-time world champion recorded his 52nd WRC win in what was a brutal Rally Sardinia that saw only four WRC cars complete the distance.

The championship leader extended his advantage to 11 points after beating teammate Elfyn Evans by 46s, despite having the challenge of sweeping the tricky rough gravel roads throughout the opening day.

The Frenchman then set about reeling in and then leapfrogging Sordo early on Saturday, before inheriting the lead when Tanak retired on Stage 12 after hitting a rock on stage. Sordo's retirement from second on Stage 15 further increased his lead.

Once in front, Ogier skilfully managed the situation scoring five stage wins on Saturday before cruising to the victory on Sunday, a first for Toyota in Sardinia. 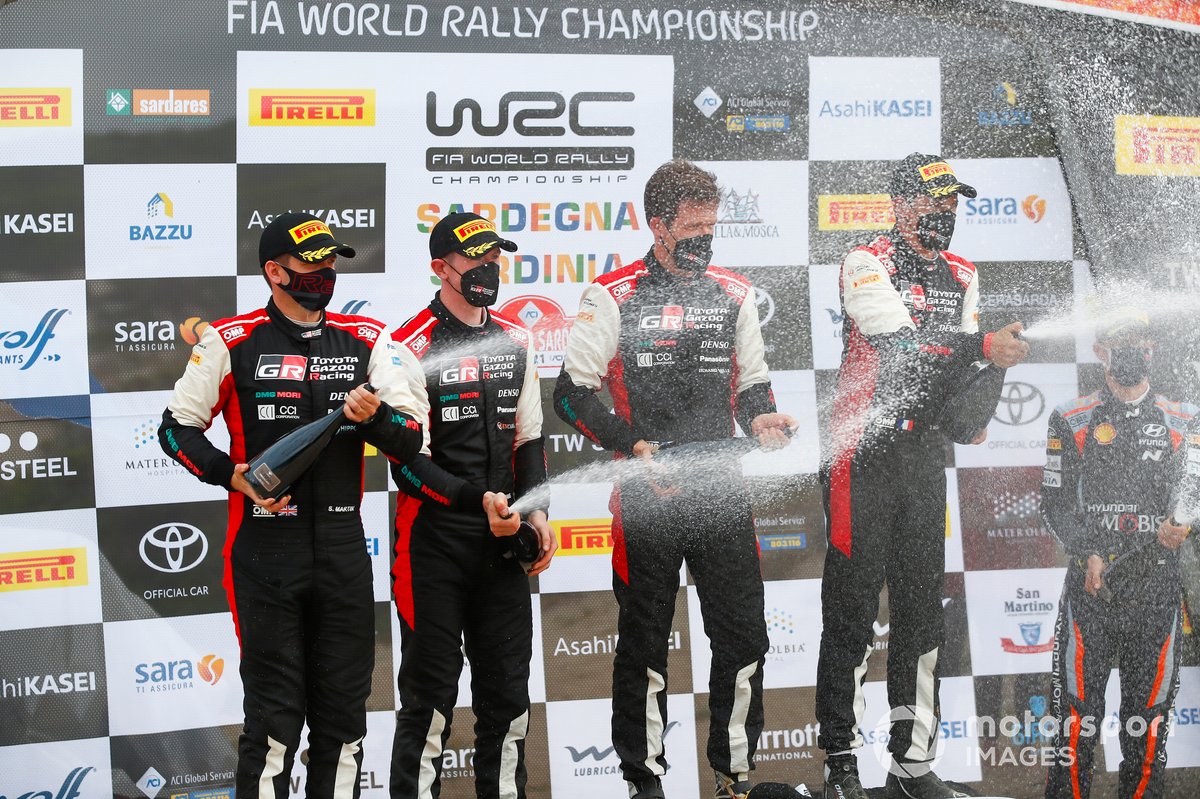 "It is true that I did mention before the start that I was not so sure what I was doing here this weekend and that I would prefer to be home. It looks like it was a good idea to be here finally," said Ogier.

"It is hard to rank victories but winning from being first on the road in Sardinia, it doesn't happen every day, that is s sign that we need rank this one pretty high, its special.

"To be very honest, I do prefer the intense fight this weekend but with these kind of rules the top drivers cannot all fight together because there are too many differences with the road position.

"That is a bit of a shame but it is nothing new. We can be very proud from this one.

"I was really expecting to suffer a lot. My target at this moment is to focus on the guy just behind you and if you manage to beat the guy behind you it is already an achievement.

"If it is even more, then that is a bonus. I managed to be faster than Elfyn and Thierry (Neuville) on day one which was very good for us. After Ott was at a different speed but kinda normal with his road position.

"Day two was another strong day not with the same amount of risk as for sure on day one I had to take a lot of risk to try to compensate the starting position.

"Then when Ott [Tanak] hit some troubles and we found ourselves in the lead, and from this moment on a different race started, and we had to try and stay clever to the end to secure this win."

Ogier admitted that he didn't expect to leave Sardinia with 27 points but credited the work to improve the Yaris WRC car that Toyota completed in the test between Rally Portugal and Rally Sardinia.

"It has been an amazing weekend for me for sure. I didn't expect to be able to come here and fight for the top position. Coming out with 27 points rally feels good," he added.

"We made some work during the test between the rallies in Portugal, we were not as fast as we wanted and I'm glad we have come back to a car I like much more."