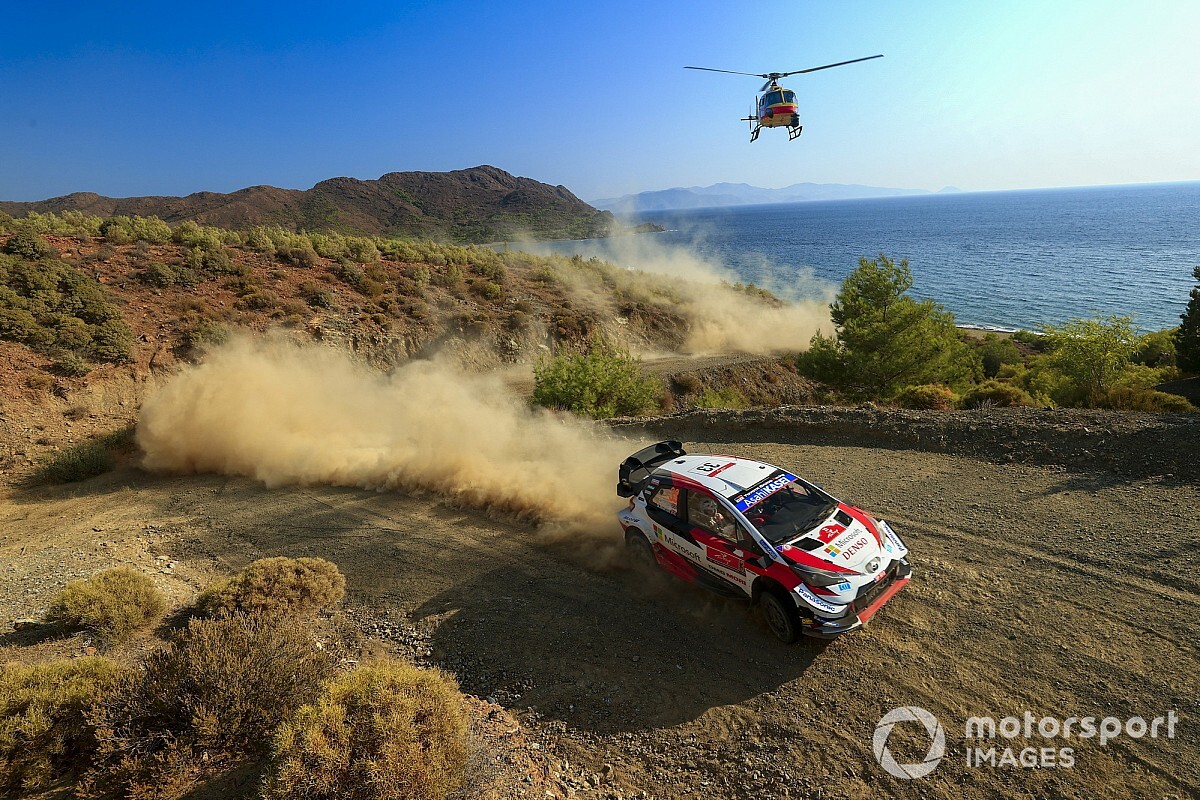 Toyota driver Elfyn Evans won Rally Turkey and soared back to the top of the WRC drivers’ standings after a day of high drama.

The Welshman took a cautious approach throughout what is the most attritional event on the WRC calendar. His reward was a third career victory in the sport’s premier series and the second of his debut season with Tommi Makinen’s Toyota team.

The final day began with Hyundai’s Thierry Neuville and Toyota’s Sebastien Ogier picking up the cudgels to continue their furious battle at the top of the order. Both men picked up punctures on the first stage of the day, the notorious 38km Cetibeli test, as did the third place man overnight, Hyundai’s veteran Sebastien Loeb.

So it was that Evans’s game of patience paid dividends as he emerged from the stage with a mighty 47-second advantage over the erstwhile leaders.

Neuville drove flat-out on the first run through Marmaris to leap-frog Ogier into second and attempt to close the gap in case Evans suffered the slightest delay. On the second pass through Cetibeli, Ogier’s Yaris WRC finally began emitting smoke and the six-time champion retired.

The Frenchman’s misfortune saw his former nemesis, nine-time world champion Loeb, elevated back into the podium places in the second Hyundai.

Team tactics were hard to manage amid such dramatic changes in fortune but Hyundai played its joker in the form of Ott Tanak, who had restarted out of the points battle after dropping out with steering failure on Saturday morning.

The Estonian took a road penalty to push Ogier in front of him and slotted into place in front of his two teammates on the penultimate stage.

After launching away from the start with purpose, Tanak then parked up and allowed both Neuville and Loeb through in front of him to minimise the number of rocks pulled up in their path before taking a gentle trundle through to the end.

Tanak’s focus was squarely on the five bonus points available for winning the final Power Stage on the second run through Marmaris.

Laden with only one spare tyre and running the softest rubber that he dared, Tanak set a blistering time of 4m 20.8s as his best shot at claiming the five bonus points that might help to retain his 2019 drivers’ crown.

Both Loeb and Kalle Rovanpera in the second surviving Toyota were focused on bringing home their hard-earned manufacturers’ points and so it was left to Neuville to throw his car through Marmaris with abandon, shading Tanak by 0.4s to maximise his bonus points.

Evans took a much gentler approach and settled for two bonus points on top of his victory. He now holds an 18-point advantage over teammate Ogier with two rounds remaining.

Tanak’s Power Stage points keep him level with Rovanpera in third in the points, while Neuville’s 23-point haul from Turkey brings him back into contention a further five points adrift. Toyota remains at the top of the manufacturers’ standings by nine points.

In the WRC2 category, points leader Mads Ostberg was absent from the cockpit and this allowed fellow WRC refugee Pontus Tidemand’s Skoda to take his second victory of the year and claim a narrow lead in the standings.

With neither Ole Christian Veiby or Nikolay Gryazin present for Hyundai, the Swede’s nearest challenger was Frenchman Adrien Fourmaux in M-Sport’s Fiesta with Eyvind Brynildsen coming home a distant third after several issues through the weekend.

In the WRC3 category, victory went to the Skoda of Kajetan Kajetanowicz, the Pole keeping in front of Bolivia’s Marco Bulacia and local hero Yagiz Avci.