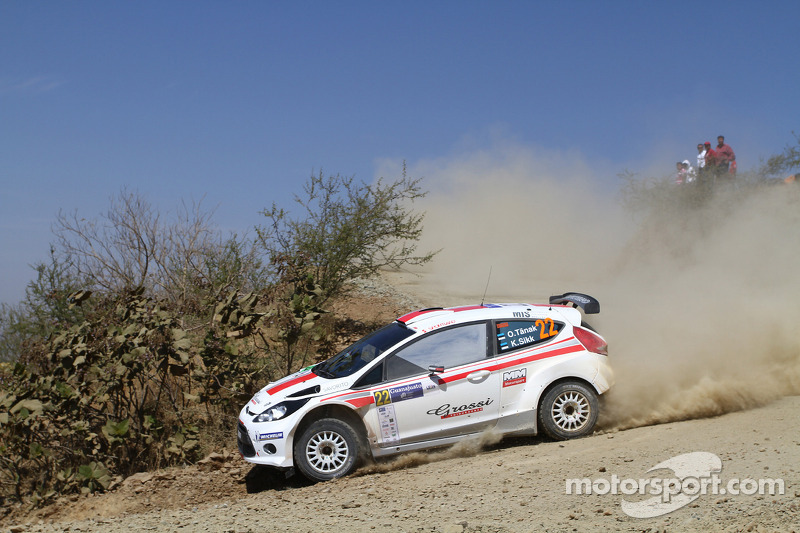 Ott Tanak overcame his lack of Acropolis Rally experience to lead the Super 2000 World Rally Championship standings after the opening day in Greece.

With six stages run his lead over Red Bull Skoda driver Juho Hanninen is 29.2s. Bernardo Sousa completes the top three in his Fiesta, albeit more than 90 seconds behind the impressive Tanak, who is on course for his second SWRC victory in as many starts.

“So far it’s been quite good for us,” said Tanak. “We made a small mistake by starting the last stage with old tyres because it was quite slippery. But the car was completely okay, which should make us happy as this is Greece and a rough rally.”

Hanninen, who is still chasing his first SWRC win of the season, suffered punctures on both runs through Thiva. The rapid Finn said: “It’s been a tough day with two punctures and there is no chance to fight if you have these problems. I will try to win at least one stage tomorrow because today it was nothing so already I would be 100 per cent better.”

Sousa stuck to his plan of keeping out of trouble in his Fiesta. At the end of the day’s final stage, the Portuguese driver said: “We’ve tried to find a good rhythm and run away from the problems. We did a good day and this position would be perfect if we can keep it tomorrow.” 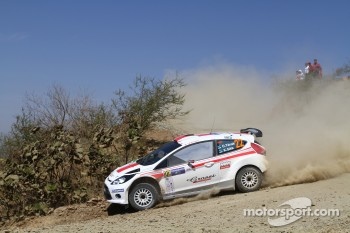 Rear differential failure on stage two wrecked Eyvind Brynildsen’s hopes of a strong result on his first appearance in a latest-specification Fabia. But he persevered at the wheel of his PS Engineering-run car to complete day one in fourth overall despite relying on front-wheel drive only. “The rear was all over the place and there was no acceleration,” said the Norwegian. “I had to be really cautious.”

Hungarian Frigyes Turan said he was happy to be fifth in his Fiesta after a day free of problems. Hermann Gassner Jr, in the second Red Bull Skoda Fabia, was also satisfied in sixth position. The German’s only cause of major concern occurred on the final stage when his car’s brakes faltered five kilometres from the end of the run.

Martin Prokop was in trouble from the opening stage when his Fiesta developed a rear differential glitch. With no opportunity to make repairs at the remote service halt in Kamena Vourla Prokop was forced to nurse the problem throughout the day and has experienced significant time loss in the process. The Czech is seventh overnight, one place ahead of Albert Llovera in an Abarth Grande Punto.

“It was really bad luck for us to drive all day with rear-wheel drive,” said Prokop. “We had the problem all day and for the championship it’s very bad for me. It was crazy, no traction at all. I will try my best for the next two days.”

Nasser Al-Attiyah was fastest through stage one but his challenge soon imploded when his Fiesta’s powersteering failed prior to the start of the second stage and he lost more than two minutes. Repairs enabled him to go quickest on stage four but he would stop for good on stage five.

Karl Kruuda spun his Fabia on the opening stage and went off twice on stage two before stopping for good on stage five.