Rovanpera transformed a 4.3s deficit to overnight leader Neuville into a 4.8s advantage over Toyota teammate Elfyn Evans after Saturday morning’s loop of three stages. It was the fifth lead change of the event to date.

Esapekka Lappi climbed to third some 12s adrift as the three Toyotas capitalised on Neuville’s struggles to find the grip and a costly error during the morning’s final stage. Neuville headed to service 15.1s behind Rovanpera in fourth.

Hyundai’s Oliver Solberg ended the morning fifth overall but is now almost a minute adrift of the lead group after struggling for confidence behind the wheel of his i20 N.

Toyota’s Takamoto Katsuta enjoyed a trouble free run to hold sixth ahead of the M-Sport Ford duo of Adrien Fourmaux and Gus Greensmith.

With stages 9 and 13 cancelled last week due to reindeer that had settled in the area, the crews faced a shortened itinerary consisting six stages, three in the morning followed by a repeat of those in the afternoon.

The day started with Rovanpera moving into the rally lead, albeit by 0.7s from Neuville after the Hyundai driver saw his lead evaporate after Stage 8.

Rovanpera wasn’t particularly happy with his drive on the 10.49km test ending the pass with the third fastest time behind stage winner Evans and teammate Lappi. Evans felt his efforts were scrappy but it was enough to win the stage by 0.4s from Lappi.

Neuville could only manage the sixth fastest time dropping 6.7s in the process to concertina the battle between the top four from 8.8s to 3.2s.

Solberg remained fifth overall but continued to drift away from the top four after admitting he’d been too careful in the stage.

Teammate Ott Tanak and M-Sport’s Craig Breen returned to the fray after both retiring from the action on Friday.

Rovanpera extended his lead by winning Stage 10, pipping a resurgent Tanak by 0.1s across the 19.49km test.

Neuville was fourth fastest losing a further 3.4s which relegated the Hyundai to third overall, 0.1s behind Evans, who clocked the third fastest time.

The time covering the top four extended back out to 8.8s after fourth-placed Lappi lost 5.6s to teammate Rovanpera on the stage. Solberg again struggled to match the pace of the lead group as the Hyundai young gun found himself in lonely battle for fifth. 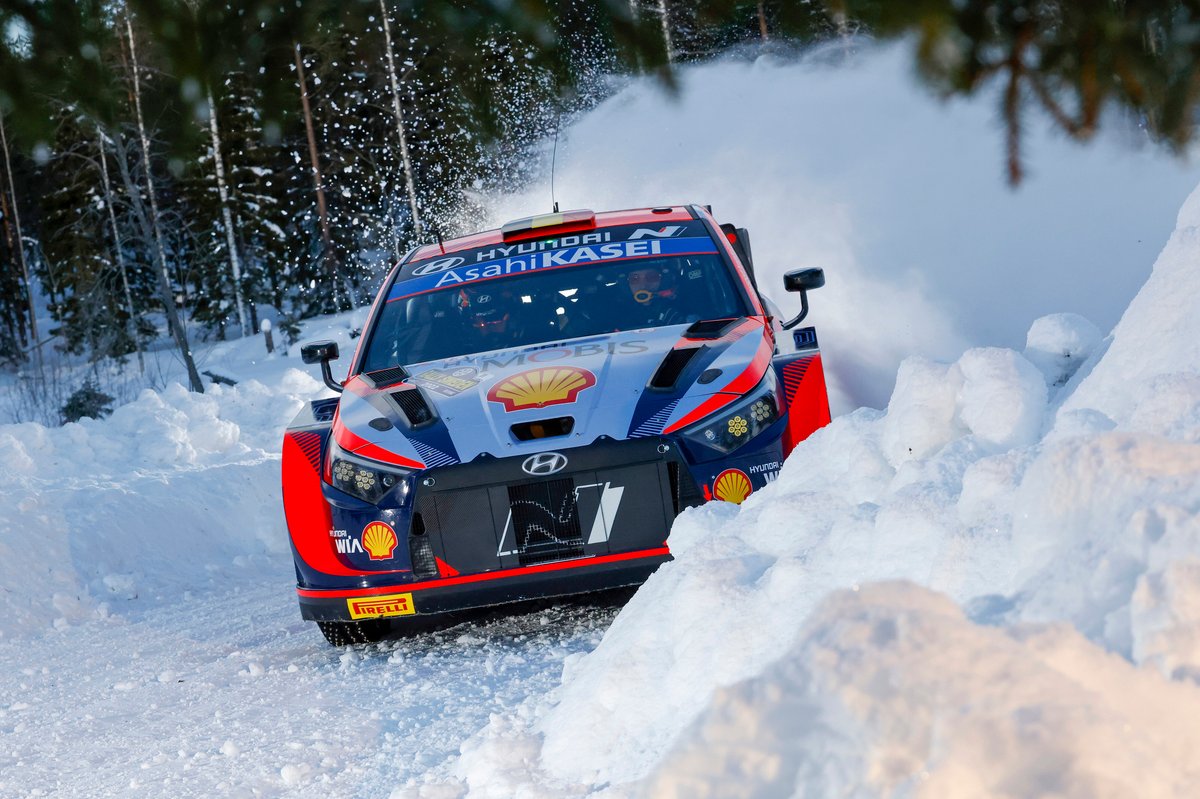 Neuville’s hopes of recovering the lost ground were dealt a blow on the final spectator stage of the loop held in Umea city centre. The Hyundai driver overshot a junction, necessitating a spin to put him back facing in the right direction.

In addition to the error, the Belgian reported an issue with his hybrid system which ultimately cost him 11.2s, dropping him to fourth overall.

"I went straight on at the first braking point,” said Neuville. “After that, something was strange - the car was slowed down all the time by the hybrid system. I couldn't get the speed, but we are still here.

"The Toyotas were really fast this morning and I couldn't get the speed to be honest, but we are still here and we are trying.”

The returning Breen showed his pace by winning the stage by 0.2s from Rovanpera, while Evans and Tanak were 0.8s back.

Solberg lost even more ground in the test declaring that he was “driving very bad today” and didn’t have “any confidence to push the car".

The field will return to action this afternoon for a second pass through the morning stages.