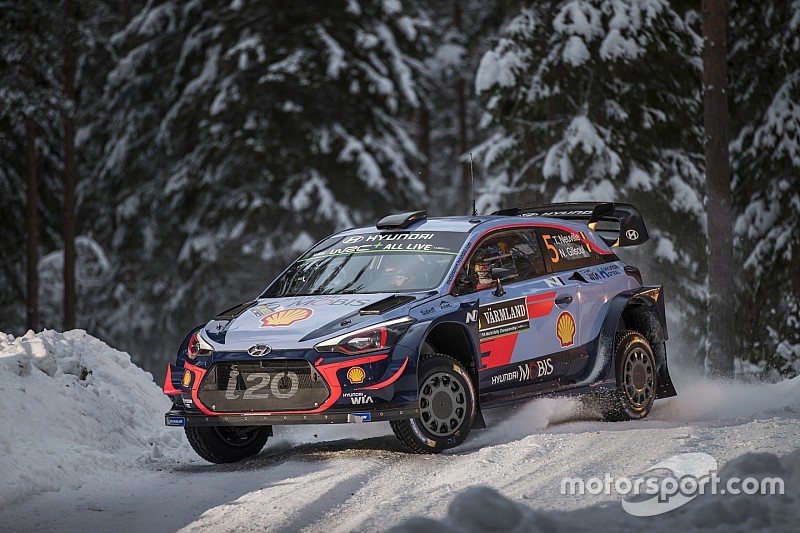 Overnight leader Ott Tanak had initially pulled away from the field by winning the morning's opener Hof-Finnskog, establishing a 6.8-second cushion over Citroen returnee Mads Ostberg as Mikkelsen and Neuville held third and fourth.

But there was more fresh snow on the following stages, meaning Tanak's second place in the start order proved an impediment.

Neuville - fifth on the road - capitalised by winning the Svullrya stage and leaping into the lead, with Mikkelsen moving into second by going quickest on the Rojden stage that concluded the loop.

The two Hyundais are now 3.7s apart up front, with Esapekka Lappi and Ostberg also within 7.4s of the lead in third and fourth.

Tanak initially only dropped to second, but tumbled right back to seventh on Rojden and ended the stage raging that the rally organisers "can screw themselves" for not doing a better job at ploughing the stage before the WRC cars came in.

WRC champion and Monte Carlo winner Sebastien Ogier had a miserable morning dealing with such conditions from first on the road. He is back in 11th and already 47s from the front.

Lappi maintained his third place heading for service despite being one of several drivers who clouted a mystery black object on the stage, causing him to slow as he feared damage.

Elfyn Evans was the only one caused a serious problem, picking up a rear puncture on his M-Sport Ford and falling a minute and a half away from the leaders. He had already been down in 12th and struggling for confidence in the conditions.

Craig Breen completes the early top five, just ahead of Jari-Matti Latvala. Tanak is close behind, and has Hayden Paddon and Teemu Suninen - both on their first WRC events of 2018 - right on his tail following his SS4 angst. Just 5.4s covers fifth to ninth.

Kris Meeke is only 10th, admitting he was too cautious at first and then getting spooked by his own impact with the unidentified solid object on SS4.