© 2021 Motorsport Network. All rights reserved.
TV Tickets fashion Giorgio Piola jobs
Previous / Loeb and Elena on top of the podium in the 'Monte' for the seventh time Next / Sébastien Ogier: The first time I’ve been happy with second place
WRC Race report

In one of the toughest editions of the Rally Monte Carlo in recent years, Sébastien Ogier and Julien Ingrassias held on to place second!

Wolfsburg (19 January 2013). Absolutely “Monte”: Volkswagen showed an impressive debut in the FIA World Rally Championship. In one of the toughest editions of the Rally Monte Carlo in recent years, Sébastien Ogier/Julien Ingrassia (F/F) managed to lead the Polo R WRC in its first competitive outing to second place. 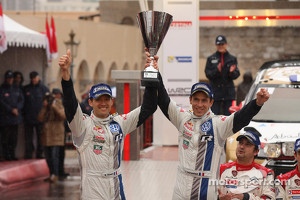 In difficult weather conditions with a mix of snow, ice, and wet asphalt next to bright sunshine, thick fog, and heavy rain Ogier/Ingrassa won two special stages on the classic through the French Maritime Alps.

Behind the nine-time world champions Sébastien Loeb/Daniel Elena (F/MC, Citroën), Ogier/Ingrassia achieved top times from the start, thus reaching the podium straightaway and on their own accord in the debut of the Polo R WRC. Their team colleagues Jari-Matti Latvala/Miikka Anttila (FIN/FIN) were among the top five almost until the end of the rally.

Because of the extremely challenging weather conditions with slush and pieces of ice, they were, however, forced to retire after sliding off in the legendary special stage over the Col de Turini.

First special stage, first fastest time – for Volkswagen the Rally Monte Carlo began with a milestone achievement. On “Le Moulinon”, with 37.1 kilometers the longest special stage of the rally, Sébastien Ogier/Julien Ingrassia achieved the best time. On the second day, the French duo also secured their position with the best time in the fifth special stage, “La Batie D'Andaure”, in their home rally “Monte”. With other top results Ogier/Ingrassia consolidated their second position in the overall ranking. In total, Volkswagen managed to record top-three results in 14 of 16 special stages.

Extreme weather: premature end to the “Monte” for safety reasons

Extreme weather conditions and safety concerns resulted in a premature end of the Rally Monte Carlo. The organizers of the rally called off the remaining two stages on Saturday evening, including the final round over the Col de Turini. Heavy rain and the resulting unpredictable weather conditions in the night from Saturday to Sunday as well as traffic chaos around the mythical special stage caused safety concerns. Shortly before the cancellation of special stages 17 and 18, Jari-Matti Latvala/Miikka Anttila had slipped from the track into the barriers with their Polo R WRC. Slush and pieces of ice had made the opening stage of last day of the rally unpredictable. Besides Latvala/Anttila, other top drivers crashed out in this special stage.

Changing road textures and unpredictable weather: The conditions in the Rally Monte Carlo are unique in the WRC calendar. In no other rally is the skill of the driver as important as in the “Monte”. An additional success factor: the tyre choice. In the 2013 edition of the classic rally spike tyres turned out to be a rare commodity. No more than 20 pieces per car are permitted by the regulations. When which tyres are used, is a decision that the teams decide based on the information provided by weather crews along the stages and precise weather forecasts. Here, Volkswagen not only proved to be ready for the WRC with the Polo R WRC technically but also in driving and logistically.

The next round of the FIA World Rally Championship (WRC) will take place in Sweden from February 07–10, 2013.


Jost Capito, Volkswagen Motorsport Director “Second place in the first rally of the new Polo R WRC is more than we could have expected. The team did an exceptional job in the last four rally days and prepared the cars perfectly. The Rally Monte Carlo is the most complex event in the calendar and the team has here shown that they are ready for the World Rally Championship. There was no mistake, not the slightest problem. One cannot value the performance of Sébastien Ogier high enough. He drove the ‘Monte’ for in a World Rally Car the first time. There is no other rally in which the driver’s impact on the result is bigger. That is why we will not see where we stand with the Polo R WRC until after the upcoming events.”

Sébastien Ogier, Volkswagen Polo R WRC #8 “I never was as happy about a second place as I was today. To reach the podium in our debut with the Polo R WRC is just great. These were probably the most difficult conditions in a Rally Monte Carlo I have ever experienced. Especially today, during the first run to the Col de Turini, it was extremely slippery, so that speeds of more than 20 kph were not possible. It was just about keeping the car on the road. The entire team worked very hard during the last year, and I am happy to give something back to them. I am sorry for Jari-Matti but I am sure that we will celebrate further victories together for Volkswagen in the future.”

Jari-Matti Latvala, Volkswagen Polo R WRC #7 “I am very disappointed. There was more wet snow in the first run through the Col de Turini stage than I expected. I was too fast right in the beginning, the car did not turn as expected, and I crashed heavily. Another car had slipped there before I did and I hit the same lane. There was nothing I could do. It was my goal to gather lots of experience with the Polo R WRC. It is bitter to end the rally this way. I am sorry for the guys because they prepared the cars brilliantly. I really wanted to give them a points result.”

... the Volkswagen Group brand Audi, which got on board the World Rally Championship at the “Monte” in 1981 with the Quattro, winning, just like Volkswagen with the Polo R WRC, the very first special stage in its debut as a manufacturer. At the time, it was Hannu Mikkola who had a dream start; in 2013, it was Sébastien Ogier who started in a similarly spectacular way in the very first and longest special stage. The Quattro was revolutionary within the World Rally Championship in the early eighties and helped start the triumphant march of the four-wheel drive. This kind of transmission technology is indispensable in World Rally Cars today.