The reigning world champion won three of the four afternoon stages and is now armed with a comfortable 38.9s lead, after nearest rival Sordo rolled on Stage 15, ending his victory hopes.

Sordo clipped a culvert on the exit of a corner ripping the right rear wheel from the Hyundai i20 before pitching the car into a roll. Sordo and co-driver Borja Rozada, who were in a tight battle for second with Evans, escaped the incident unscathed.

It was yet another blow for Hyundai after Ott Tanak retired from a comfortable 40s lead after hitting a rock on Stage 12 this morning.

The demise of two-time Sardegna winner Sordo promoted Evans, who won Stage 16, to second overall. The sole remaining Hyundai of Thierry Neuville moved into third, 1m06s back, but ahead of Toyota’s Takamoto Katsuta in fourth.

"The gap is quite big, and I had a try on some stages, but I don't have the speed. We tried some settings, we changed the dampers, but we don't get it working all together,” said Neuville. "I really struggle to find the performance we need, despite having the feeling that I am quite on the edge sometimes. I can't do much more."

Only four WRC cars remain in the running for victory as Sardegna rough challenging roads continued to bite its competitors.

Crews kicked off the afternoon with a tricky 14.7km run through the slippery and narrow gravel tracks of the Bortigiadas - Viddalba stage. Conditions were much hotter and dryer compared to the morning.

Ogier, equipped with all hard tyres, recorded his third stage win extending his lead over Sordo, who was 3.8s shy. Crucially for Sordo, the Hyundai driver was faster than Evans preserving his second overall, while Neuville dropped a further 4.5s. 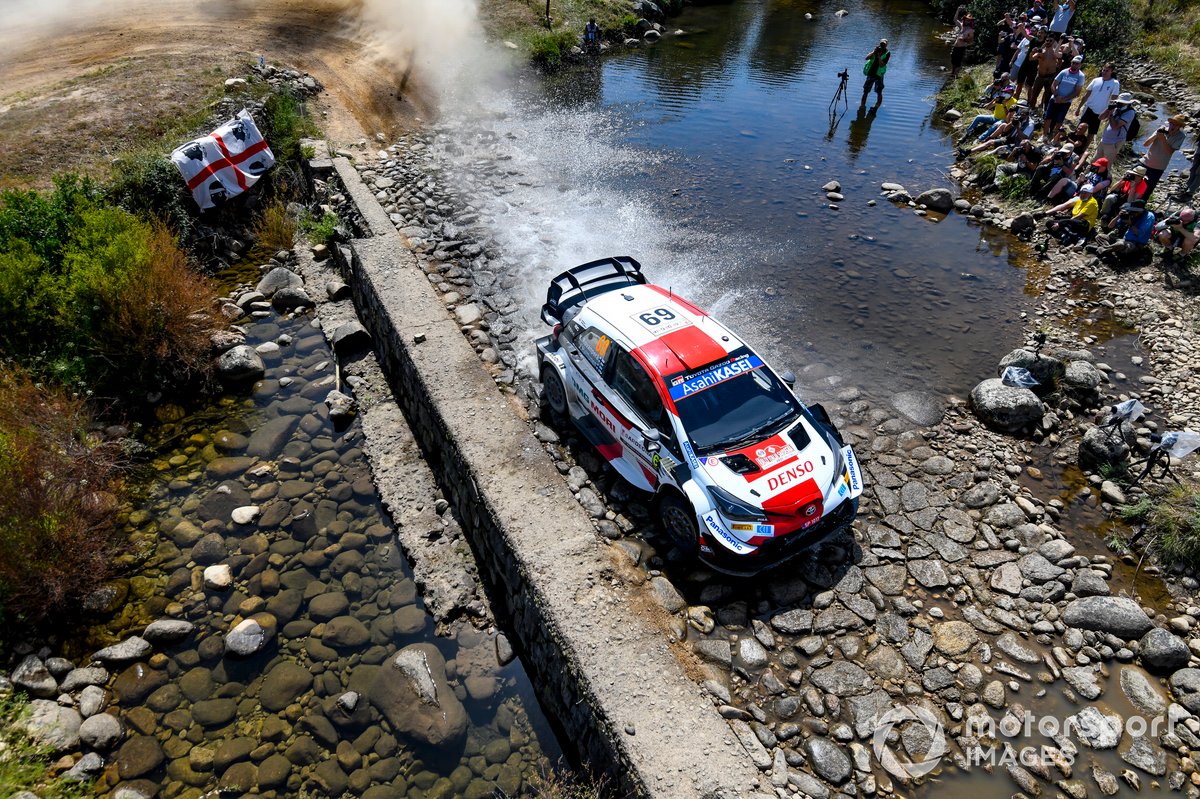 Kalle Rovanpera, who was second into the stage, was stunned by the slippery conditions admitting it was a scary run.

"Really scary. It was one of the most slippery stages I have ever done. It was crazy - I was going so slow, but still it was so slippery. So much cleaning in there,” said Rovanpera.

Ogier continued his momentum in Stage 14 in what proved to be a closely fought test on fast, undulating narrow roads.

The Frenchman claimed yet another stage win but was only 18s faster than Neuville, who took eight tenths of a second out of Evans. Sordo lost a further 3.3s to rally leader Ogier dropping the Hyundai driver into the clutches of Evans.

The complexion of the rally changed in Toyota’s favour in Stage 15 after drama struck Sordo with his roll 3.3km into the 14.7km re-run of the Bortigiadas - Viddalba test.

It appeared to be a driver error from the Spaniard, who managed to put the car back on its wheel with the help of spectators and move the vehicle clear of the road.

Katsuta lost significant time in the stage after he was forced to stop 50 metres from the start to remove radiator blacking from the front of his Yaris.

Evans prevented Ogier from a clean sweep of stage wins in Stage 16, the final test of the day, finishing 1.5s ahead of Ogier, with Neuville third.

"I think it's been a perfect weekend for us so far. We did everything we had to do, and we need to finish the job tomorrow,” said Ogier.

The rally continues tomorrow with four more stages including the Power Stage.