Sebastien Ogier has taken the lead of Rally Sardegna in dramatic circumstances after comfortable rally leader Ott Tanak hit a rock and was forced out on the final morning stage.

Tanak started the day by claiming his sixth stage win of the event but faced a strong response from Toyota as Ogier and Elfyn Evans shared the stage wins for the remaining three tests of the morning loop.

But drama struck on Stage 12 when the Estonian hit a large rock that damaged his Hyundai i20 Coupe enough to force him to stop mid-stage. Tanak had held a comfortable lead of more than 40s before the incident.

Tanak's demise from the lead, for the second rally in a row, means Ogier has inherited a 17.5s lead over Hyundai's Dani Sordo.

The two-time Sardinia winner had lost second spot this morning to the reigning world champion after struggling for confidence over the morning stages. The Spaniard also had a worrying stall after a water splash, costing him valuable time.

Evans has jumped to third, 32.1s back from the lead, with Thierry Neuville in fourth.

It didn't stop Tanak, last of the WRC runners, as he stormed through Coiluna-Loelle 1 to win Stage 9, his sixth stage win of the rally, after eclipsing a strong benchmark set by Evans, who clawed further clear of Thierry Neuville in the battle for fourth overall.

Ogier was third fastest but made crucial time on second overall Sordo, who lost 9.3s to his rival after his car stalled after an aggressive run through a new man-made water splash at the end of the stage.

"The engine stalled, and I lost a lot of time there. Maybe some water coming in, but now it is working okay," said Sordo, who dropped 34.8s behind leader Tanak.

The stage also saw a trio of top flight crews back in action under Rally 2 regulations after retiring on the opening day. Returning after a sudden suspension failure, Kalle Rovanpera, who crashed spectacularly at this stage last year, was the fastest of the three in sixth spot. 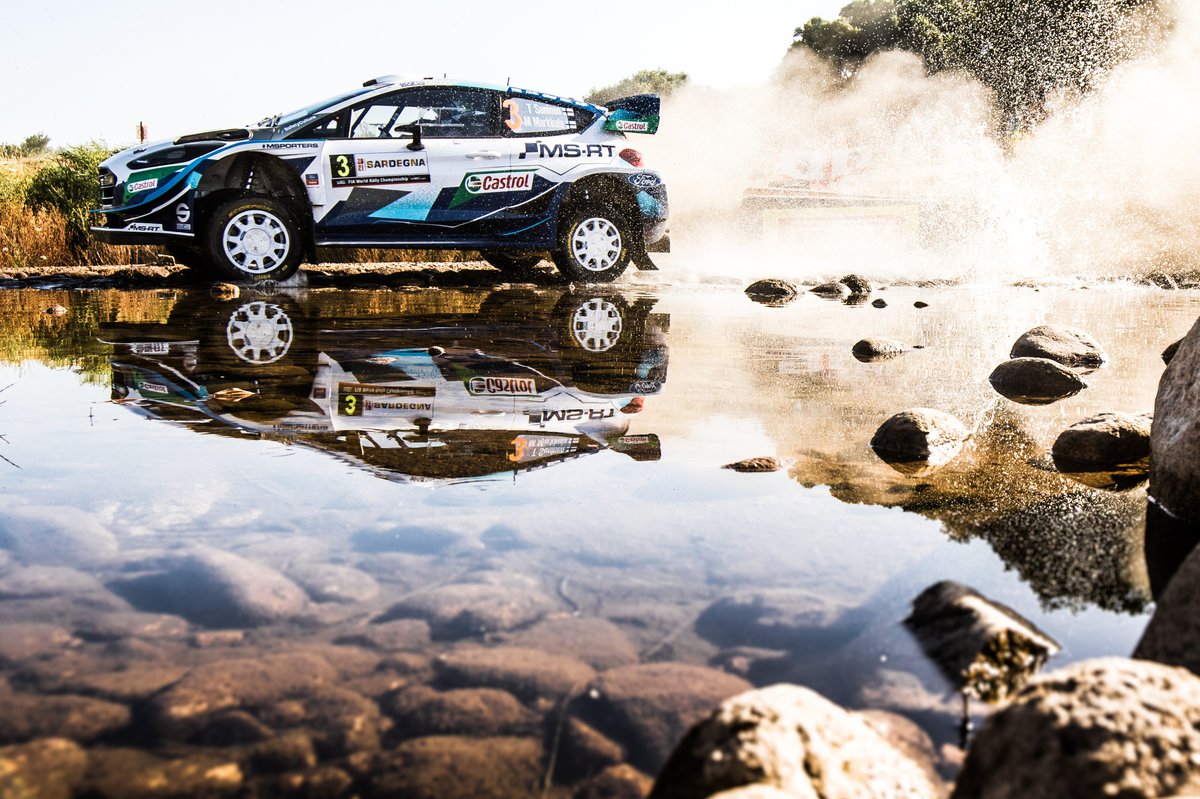 Following a transmission issue yesterday, M-Sport's Gus Greensmith was the quickest of the Ford duo as Teemu Suninen made a solid start to his return after rolling on Friday's opening stage. The Finn had been struggling to adapt to the car given his last WRC gravel event was seven months ago at Sardinia.

Stage 10 (Lerno - Monti Di Ala, 22.08km) saw the Toyota duo of Ogier and Evans ignite their challenge as the former claimed his first stage win, which was enough to leap Sordo to second overall, as the Spaniard struggled for confidence.

Tanak maintained his healthy lead finishing 1.7s slower than Ogier, while Evans took another second out of Neuville.

There was a scary moment for Takamoto Katsuta when he hit a 'helmet sized' rock on line that lifted his Toyota into the air, but somehow he managed to regain control. It did however cause some damage to underneath of the car.

"In the middle of the road, a very fast section, there was a helmet-sized rock. It was impossible to avoid. The car just jumped, and there is a big hole under the under guard." said Katsuta.

The Welshman pipped Ogier by 0.2s while Tanak was a tenth further back as the top Hyundai.

Neuville put in a real push in this stage but it was not enough albeit 1.4s adrift. Sordo's slide continued as he dropped yet more time with only a 20s margin to Evans in fourth overall.

Despite taking damage to the front of his car, Ogier took to the final stage of the morning loop as the rally of attrition continued. Surprisingly he inherited the lead as Tanak hit a rock and was forced to stop 8.9km into the 22km stage.

"Luckily I was not flat out in that moment. I tried to lift the car, but it was still a very big hit on the front. A rough stage, there is a long way to go."