Sainz on top as Gronholm falters

Two-time World Rally Champion Carlos Sainz took over the lead in his Citroen Xsara on the second day in Rally Argentina as early leader Marcus Gronholm succumbed to an accident and retired from the event. Petter Solberg and Phil ...

Two-time World Rally Champion Carlos Sainz took over the lead in his Citroen Xsara on the second day in Rally Argentina as early leader Marcus Gronholm succumbed to an accident and retired from the event. 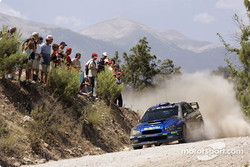 Petter Solberg and Phil Mills.
Photo by Subaru World Rally Team.
Gronholm had built on his first-leg lead, taking three of the six stage wins to start the second day to build a 13-second lead over Sainz. However, on SS19, bad luck hit him again, as he struck a rock, hard, tearing off a wheel. The Finn tried to limp to the end of the stage, but to no avail.

"we still could have finished the stage with three wheels," Grpnholm explained. "Unfortunately, the damage to the suspension also damaged the driveshaft, which broke the timing belt. So the engine stopped and there was nothing more we could do."

If Gronholm's lead had looked comfortable, Sainz's position after SS19 was surely unassailable. The Spanish veteran took a lead of over a minute and a half over teammate Sebastien Loeb out of SS19, and maintained the gap for the rest of the day.

"I'm now in the lead, but I have seen so many situations turn upside down during my career that I am not likely to get carried away," Sainz explained, drawing on his 15 years of WRC experience. "We will remain calm until the finish. Until then, we will try to keep the pace, and to avoid making any mistakes, especially in 'Mina Clavero' and 'El Condor'..."

Loeb, who lost time as the sweeper on Friday, was unable to make an impression on the leaders, as Gronholm and Sainz pulled further away, increasing the gap by almost a minute by the time of Gronholm's retirement.

"There are some places where, after just two reconnaissance runs, you can fight with the best. That is not true for the Calamuchita stages," Loeb related. They include a lot of 'vertical' sections, bumps which send the car flying in all directions. I have not been left behind, but I cannot close the gap. In these conditions, I prefer to drive with a reasonable safety margin."

The second-fastest driver of the day was Gronholm's Peugeot 307 teammate, Harri Rovanpera, who set two fastest stage times and lost only about 15 seconds to the leaders. However, he is not in contention, being in fifth place and over ten minutes back, after losing massive time on Friday due to a power steering failure on one of the opening day's longest stages.

"Today's stages were amongst the most difficult of the entire rally," Rovanpera commented. "In the morning it was extremely slippery and it was a constant struggle to keep the car under control. In the afternoon we tried to settle into a rhythm in order to keep a fast and consistent pace. But with the time that we lost yesterday, it was always going to be a struggle."

Between Loeb in second and Rovanpera in fifth are Francois Duval (Ford Focus, 3:55 behind) and Mikko Hirvonen (Subaru Impreza, 8:46 behind Sainz). But with the attrition to date and the big gaps, the rally is now Sainz's to win or lose.