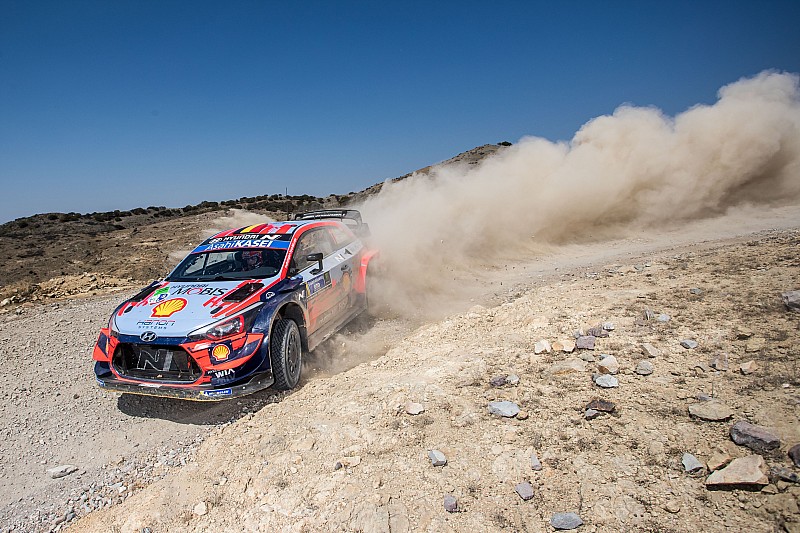 A revised running order to start the new day put Hyundai’s Thierry Neuville at the front of the field, sweeping the stages after retiring yesterday with an electrical failure. Restarting under Rally 2 rules, the Belgian’s focus could only be on getting up the order to retrieve as many manufacturer points as possible, but on the opening run through Guanajuatito his road position put him 25 seconds off the pace of Ogier’s stage-winning Toyota.

At this point the Belgian slowed for what were understood to be technical issues. The delay forced him to drop back from the first starting position and line up in fourth on the road at the start of the day’s second timed test at Alfaro.

Whatever the problem was, it was cured sufficiently for Neuville to immediately claim the stage victory, heading team-mate Ott Tanak by 2.9 seconds. Another scintillating Neuville performance on the third stage of the day at Derramadero was stymied by a quick trip down an escape road – albeit costing less time than might have been lost by running first on the road. Tanak claimed that stage victory.

Hyundai's net stage pace gains were Toyota’s loss, with Kalle Rovanpera and Elfyn Evans both nudged further up the running order to accommodate Neuville’s miraculous recovery. This had left only M-Sport youngster Gus Greensmith’s Fiesta to clear a path in front of them and neither of the Yaris drivers were able to attack in the manner that they had hoped.

Timo Suninen’s M-Sport Fiesta remains in second place but has dropped more than 10 seconds off leader Ogier. The Finn now finds the third-placed Hyundai of defending champion Tanak, only 6.6 seconds in arrears.

If the Estonian is able to maintain that sort of pace until tomorrow’s finish, and if teammate Neuville continues as the joker in the pack, then Ogier will have to summon all his famous composure to claim a record-equalling sixth Rally Mexico win.

Lappi on dramatic exit: “I didn't realise how big the fire was”