Hyundai’s Ott Tanak relentlessly pressed home his advantage on the second morning of Rally Portugal, with the top three runners pulling clear of the field.

The Estonian had vaulted up from third to first on Friday evening after both his teammates, Dani Sordo and Thierry Neuville, hit trouble.

Their misfortune presented Tanak with all the incentive he needed to pull away from the Toyota of Elfyn Evans in second place, with Sordo battling the Welshman hard in his bid to ensure maximum manufacturers’ points for the Korean marque.

Tanak closed the morning loop by recording his 249th career stage win in the top category on the daunting 37.92 Amarante test, and holds a 19.2s advantage over Evans, with Sordo third at the mid-day service.

“I guess this morning the grip was quite consistent and I guess also the characteristic worked for the car… I felt a bit more free,” said the rally leader.

“It was a great way to wake up for sure and as I immediately had kind of good feeling I pushed a bit and then there was a clean stage but for sure it’s difficult to find much more from there.”

A loop of three stages in cool, overcast conditions with a smattering of rain in the hills outside Porto awaited the crews as they continued their first full gravel event of the year.

The majority of runners elected to try and maximise available grip by taking four soft tyres with two of Pirelli’s hard compound as spares in case of need. With supplies of soft rubber limited to just eight tyres per car (and 24 of the hard compound), the conditions added another element to the day’s planning.

Neuville, restarting his Hyundai after crashing out of Friday’s penultimate stage, ran first on the road and went for hard rubber all round in a bid to preserve his stock of softs for Sunday’s points-scoring powerstage while sweeping the road for those behind him.

A mystery ailment then affected the Belgian’s Hyundai on a road section before the final stage of the morning loop, which obliged him to drop out of first place on the road and take the sixth starting spot after it was rectified.

Any suggestions that this was a little bit of gamesmanship on Hyundai’s part to get their man clear of road sweeping duties, or at least sweeping the road in front of anyone but his two high-flying teammates, were answered by team principal Andrea Adamo with his tongue firmly in his cheek.

“You overestimated me: I’m a poor Italian guy, immigrant in Germany, so I’m not so smart. I’m happy that you think I’m so sophisticated,” he said.

Neuville was still the slowest WRC car by 19.6s.

Toyota’s great hope for the future, Kalle Rovanpera, also took an odd mix of three tyres of each compound and almost immediately regretted it, to the point that he started to Tweet about the car’s curious handling between stages. Only Neuville was slower. 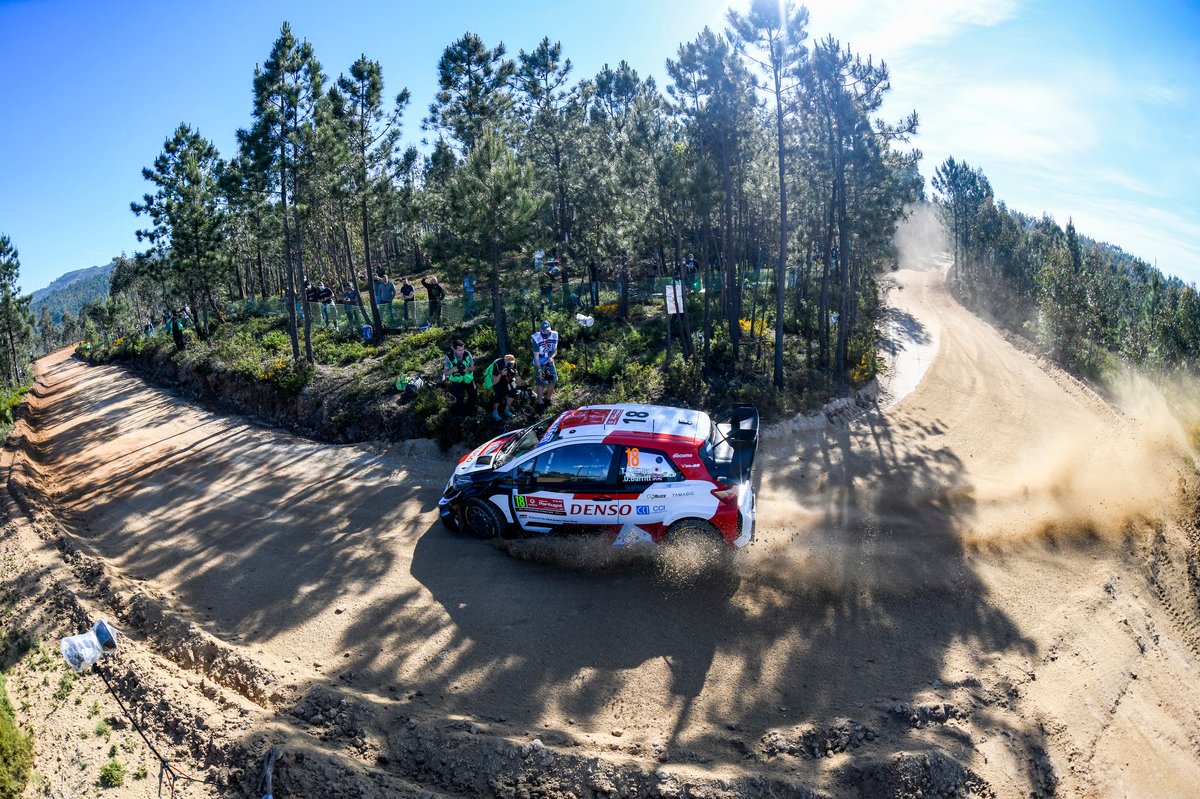 Takamoto Katsuta continued a hugely impressive run for Toyota in fourth place. The ex-Formula 3 driver has finished in sixth on all three rallies on the WRC schedule so far this season and is growing in pace and confidence on loose surfaces.

Katsuta’s pace kept him ahead of his seven-time champion teammate Sebastien Ogier, who gave his all on Friday while encumbered with road sweeping duties as the first man through the stages.

The Frenchman was less satisfied with his performance on Saturday morning, believing that he had gone the wrong way on setup in the cooler conditions and compounding his worries with a half-spin on the second stage of the morning.

“It’s a bit of both (tyres and setup) but we decided to use some used tyres this morning and we didn’t expect that we needed to use softs for the full loop to be honest, but finally more rain came and we had to use them,” Ogier said.

“It was not good for this morning but for the rest of the rally now we are one of the only guys to have still some new softs… Let’s see what we can do with that.”

Gus Greensmith kept in front of his new M-Sport teammate Adrien Fourmaux, who suffered a throttle issue on the first stage of the morning.