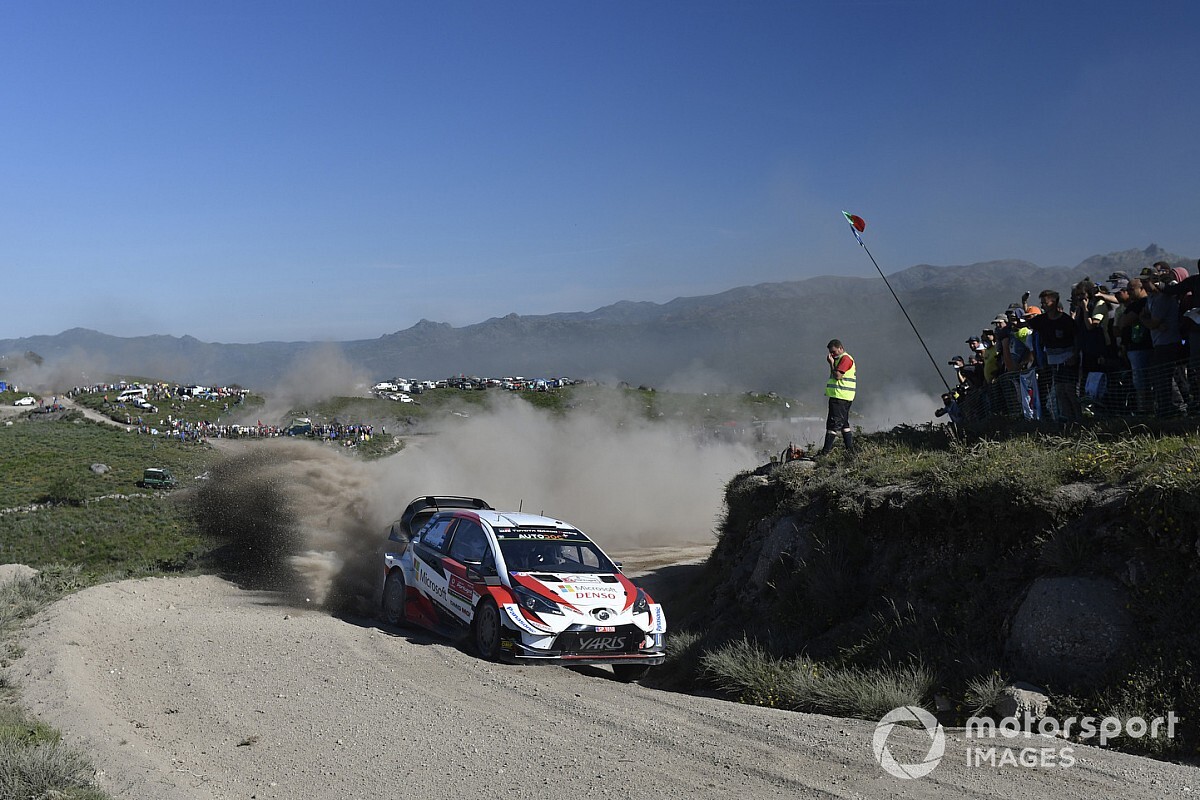 Toyota’s Ott Tanak clung onto the lead of Rally Portugal over Kris Meeke and Thierry Neuville, as both he and teammate Jari-Matti Latvala suffered damper issues.

Latvala had carved 12.2 seconds out of Tanak’s lead on Saturday morning after selecting a harder tyre compound than his immediate rivals, but his work was undone on the afternoon’s first stage when a damper gave way on his Yaris WRC.

The Finn only lost nine seconds in the initial test, but haemorrhaged 56.7s on the second stage of the loop before having to retire ahead of the final stage in order to preserve the car.

Tanak commented that “he felt something similar” when told about Latvala’s damper at the end of stage 11, and was seen looking under his Yaris on the road section to the next test.

The Estonian then dropped four seconds on SS12 before losing a mammoth 12.7s to stage winner Neuville on the final test of the day.

Tanak confirmed he was competing with a broken front-right damper, and has seen his lead whittled down to just 4.3s by teammate Meeke.

Neuville came alive in the afternoon, after having began the loop with just 1.9s in hand over Citroen’s Sebastien Ogier. The Hyundai driver took a second out of Ogier on SS11 before grabbing another 5.5s with a stage win on Cabeceiras de Besto.

He took two another stage win on Amarante to open up an advantage of 11.8s over Ogier - and leaving him just 4.9s behind Meeke and 9.2s shy of Tanak.

Citroen's Esapekka Lappi extended his advantage over Teemu Suninen’s M-Sport Ford to end the day 25.2s in front in the battle for fifth.

Gus Greensmith had been running in seventh behind Lappi and Suninen, but slid off the road and got the front-end of his M-Sport Fiesta stuck in a ditch on the 23-mile stage that concluded the afternoon.

The Briton, who is making his debut in a World Rally car in Portugal, was unable to free his car and therefore had no choice but to retire for the day.

Elfyn Evans spent the afternoon as road-sweeper to the rest, and suffered a half-spin at the start of Vieira do Minho as he battled with the conditions. Greensmith's problems elevated Evans into seventh, but he remains over four minutes behind the other M-Sport car of Suninen.

Kalle Rovanpera is up to eighth place as he continues to lead the WRC2 class in the new Skoda Fabia R5 Evo. Teammate Jan Kopecky was held back when the bonnet on his Fabia flipped up near the start of Vieira do Minho, but remains second in class and ninth overall.

Portugal WRC: Tanak on verge of victory as Meeke spins