Toyota's Elfyn Evans claimed his first victory of the 2021 World Rally Championship season with an imperious display in Rally Portugal.

Evans claimed victory with a comfortable with a 28.3s advantage over Hyundai's Dani Sordo while reigning champion Sebastien Ogier finished almost a minute and 30 seconds back in third.

On Saturday evening, the Welshman watched his lead slashed by a third when the last man standing for Hyundai, Sordo, scorched through the Porto superspecial to keep in contention.

Nevertheless, at the final morning restart, the momentum swung firmly behind Evans, who all-but doubled his lead from 10.7 seconds to 20.3s and claimed his third stage win of the event.

Evans would claim two more stage wins through the day, the only notch missing from his belt being that of the fabled Fafe stage, which was run twice at the end of each loop of stages and closed the rally with its points-scoring powerstage.

Fafe provides the iconic moment of the WRC’s Portuguese classic, when cars leap over a narrow crest that is lined with spectators that have returned for for first time this year.

On the morning pass through Fafe it was the Hyundai of Thierry Neuville, which went fastest of all by 4.5s over the 11.18km stage, shading his teammate Ott Tanak with Evans finishing third.

Both Neuville and Tanak had retired from the event after knocking the right-rear corners off their respective i20 WRCs, but returned to the fray to try and claim maximum points from the powerstage shootout in a bid to salvage their hopes of challenging for this year’s drivers’ title.

Tanak had gone so far as to dispense with carrying any spare tyres in order to save weight and even switched from a full-face helmet to an open-face model in his bid to shed every gram of excess baggage.

Neuville’s exit on Friday had given him the luxury of saving five soft tyres and he had them all aboard, trundling through the other stages to preserve them, while the only other man to have conserved a full set of soft rubber was Toyota’s championship leader Ogier.

Having climbed from eighth to third on Saturday, Ogier could afford to go easily on Sunday morning with only his junior teammate Takamoto Katsuta in a position to challenge.

With two wins from the three rallies held prior to Portugal, the seven-time champion could afford to be relatively sanguine about Evans’s first overall win of the year and instead chose to focus on upsetting Tanak and Neuville’s ambitions for the powerstage.

When it came to the closing shootout, Tanak bested his Belgian teammate by 1.6s as ample reward for his diligent weight saving. Ogier claimed the points for third-fastest time with his teammates Kalle Rovanpera and Evans scooping the last of the bonus points.

Runner-up Sordo had nothing left in his tyres for the powerstage. His second-place finish overall remained another commendable performance from the Spanish veteran, but Hyundai’s deficit to Toyota in the manufacturers’ standings, which it prioritises over drivers’ titles, has now opened to a yawning 37 points. 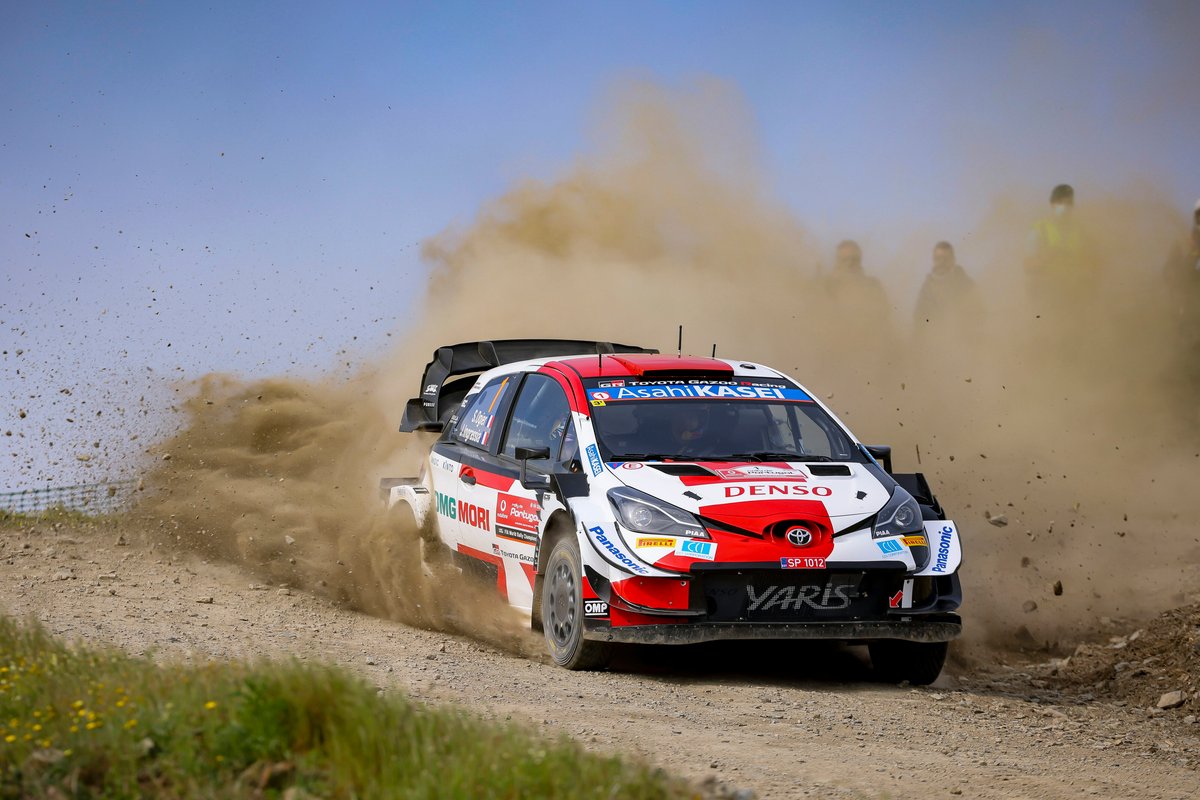 Ogier now leads Evans by two points in the drivers’ championship, with Neuville 20 points further back and Tanak a further 12 points in arrears.

In WRC2, it was the second win in two appearances for former WRC rally winner Esapekka Lappi.

The Finn beat his childhood friend and former M-Sport teammate Teemu Suninen’s Ford Fiesta into second place, with defending champion Mads Ostberg fighting back in his Citroen to complete the podium after a difficult weekend.

In WRC3, a dramatic late bid by Kajetan Kajetanowicz saw his Skoda pip the Citroen of longtime leader Yoann Rossel for victory on the final morning’s stages. Britain’s Chris Ingram completed the podium in his Skoda.

A brief 10-day pause will be followed by Rally Italy and another all-gravel outing for the teams, starting on June 3.