The eight-time world champion suffered a puncture while leading a WRC event for the third time this season in Japan, which effectively ended any hopes of adding to the win he secured in Spain last month.

Ogier has raised concerns over the reliability of the Pirelli tyres this year, having suffered punctures in four of the six rallies he has contested during a partial campaign.

Unprompted, Ogier made his feelings known on the live television feed at the end of Rally Japan, stating: "It has been a great time [in Japan].

"It is the usual story and maybe one day we will start to talk about the really shit job Pirelli is doing and maybe something will change, but at the moment really it a a joke what they are doing, it is just a lottery.”

As can be seen from the leaked image of Ogier's punctured tyre from Stage 2, there is a cut starting from the shoulder, passing through the edge and reaching the tread.

This suggests the failure could have been caused by an impact against one of the many curbs that bordered the narrow roads. 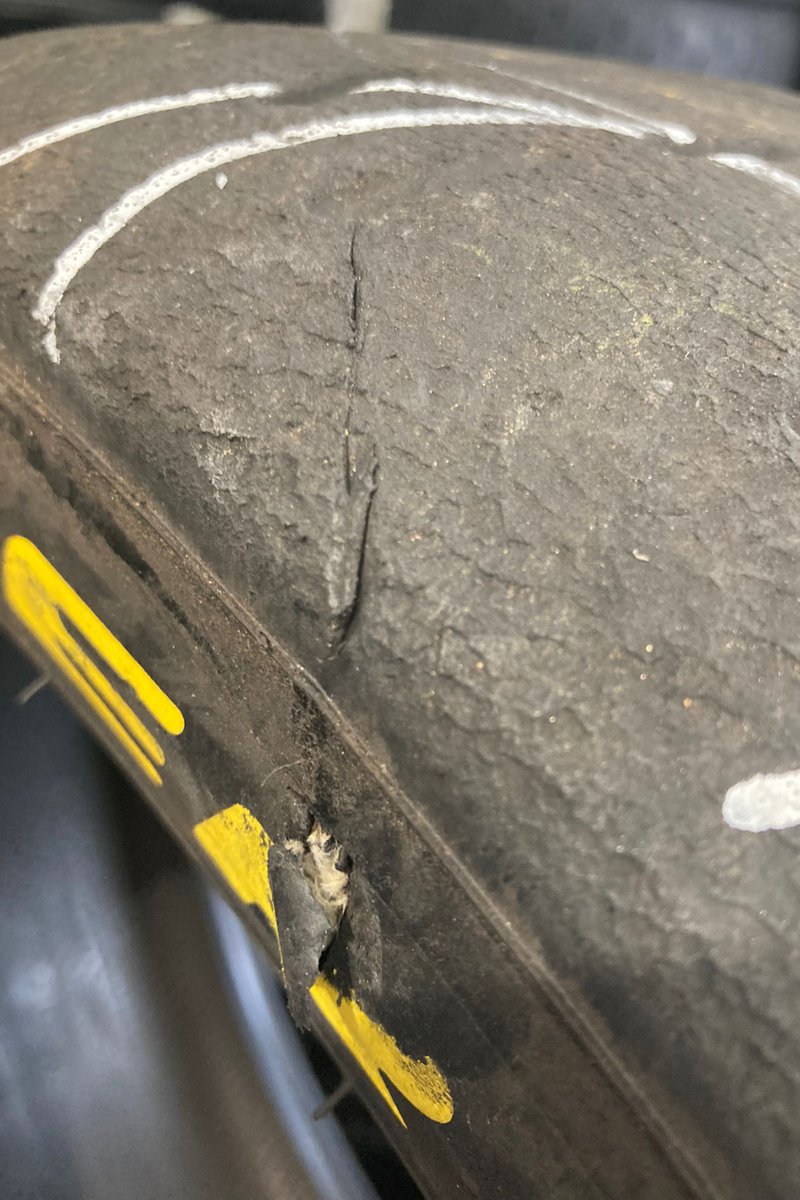 Following the conclusion of the rally, Pirelli issued a release stating that its tyres had successfully met the challenges imposed upon them during the first season of Rally1 regulations.

However, it did reveal it is planning to fine tune an evolution of its gravel and asphalt tyres for next year.

“This Japan Rally, which was unusual in terms of the high temperatures and generally dry conditions, perfectly sums up Pirelli's season, in which both gravel and asphalt tyres have consistently ensured reliability, impact resistance, low wear and performance,” said Terenzio Testoni, rally activity manager.

“This is why I can safely say that it has been a very satisfying year for us during which, although the challenge of the new hybrid cars has been fully met, we have continued to develop new solutions, building on what we have learned race after race.

“Now it is already time to focus on the next season, for which we are fine-tuning an evolution of the asphalt and gravel ranges.”

While Ogier has since apologised for the strength of his language over the matter, the Frenchman maintains the WRC control tyre needs to be improved.

He is not the only driver to raise concerns over the tyres this year, while M-Sport called for Pirelli to strengthen its wet weather tarmac tyre following a spate of failures at Rally Croatia in April.

“Sometimes I talk about it with the wrong words because of my emotion and I have to apologise for that, but it is a real problem and it is not acceptable,” he added.

“Nobody dares to talk about and I’m the only one to speak up and it is not acceptable.

“Everyone here is working very hard to make the best and this part of the championship, it is shame that we are forced to use someone that is not doing it at the level they should be.

“I heard and I’m not sure as I’m definitely not the one who is counting that in one and a half years now there is more puncture tyres in the the 10 years with the previous supplier, so how can you explain that.

“The sport shouldn’t be gambling about this. Luckily I didn’t do the championship this year but you can easily count how much I lost. Without being arrogant I think I would have been on the podium every time that is for sure and I would have won a couple of rallies.”

Ogier admits the problem is not isolated to tarmac tyres but understands that in extreme rallies such in Kenya any supplier would be susceptible to punctures.

“On gravel it is not really fantastic either. Of course in Kenya it can happen and of course that can happen to every supplier to be honest as the conditions are extreme, I understand.

“But this weekend I had two punctures, one cost me a lot and the second one I changed on a road section and I didn’t touch anything and again it is no mistake and that is why it is frustrating.”

WRC Rally Japan: The Good, The Bad and a haunted tunnel