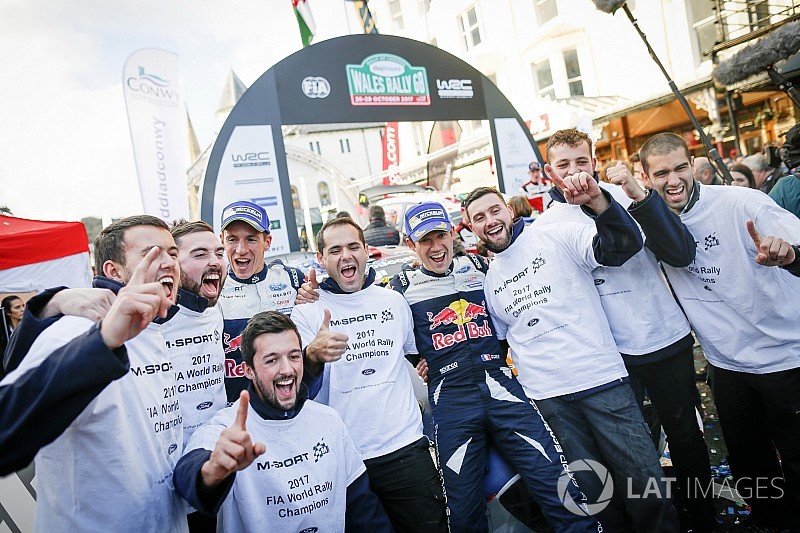 Sebastien Ogier says winning the 2017 WRC title with M-Sport was the most emotional moment of his career.

After taking four WRC titles in factory Volkswagens from 2013-16, Ogier secured a late deal with M-Sport's independent Ford programme for this season when VW pulled out.

He then clinched his fifth championship on Rally GB, where Malcolm Wilson's M-Sport team also secured the manufacturers' title and Elfyn Evans took his maiden WRC win in the team's DMACK-shod third entry.

"I don't understand where this came from, but the emotion was really strong in this moment," Ogier told Motorsport.com.

"It's hard to explain and I don't know why, but this was the strongest I have felt in this sport.

"Of course not in my life, the birth of my son was even more special, but I was so happy that I am able to take this kind of feeling from this sport still.

"I feel so proud and so happy for what we have achieved with Malcolm and with M-Sport.

"At the start of this year, we had to take this bet, we had to make this challenge with ourselves, but we did it and we succeeded.

"The guys at M-Sport worked so hard, they did so much with a smaller budget than the manufacturers. What we achieved this year is amazing."

M-Sport had not won a WRC title since it took Ford to the manufacturers' championship in 2007, but that occasion was marred by Marcus Gronholm losing the drivers' title to Sebastien Loeb and being hospitalised after a crash.

"It's starting to sink in now and I'm starting to understand that it can't get any better than this. Really, it can't," said Wilson.

"This is the absolute high point for me. You look back to when we won the two titles before [in 2006 and 2007], particularly the second one on Rally Ireland and it was messy.

"Marcus crashed, we didn't win the rally, but we got the title and that was OK. This time, it was everything and it was so, so special.

"Ott [Tanak] crossed the line and that was the manufacturers', then Seb was next, that was the drivers' and then Elfyn came and won our home round of the world championship.

"It really couldn't get any better than that. Everything was perfect."

Wilson admitted that had been one moment of doubt on the final stage, as Ogier clinching the title depending on Evans - the last of the top-class runners on the road - winning the rally.

"There was this reality check when somebody mentioned: 'what if Elfyn doesn't finish?'" said Wilson.

"Everything we'd celebrated, Seb, the championship, was based around Elfyn finishing the rally.

"And then suddenly my head was going back to thinking about Poland [2009] and that last stage when Jari-Matti [Latvala] crashed and cost us the one-two.

"We were all banking on Elfyn winning. He didn't let us down."