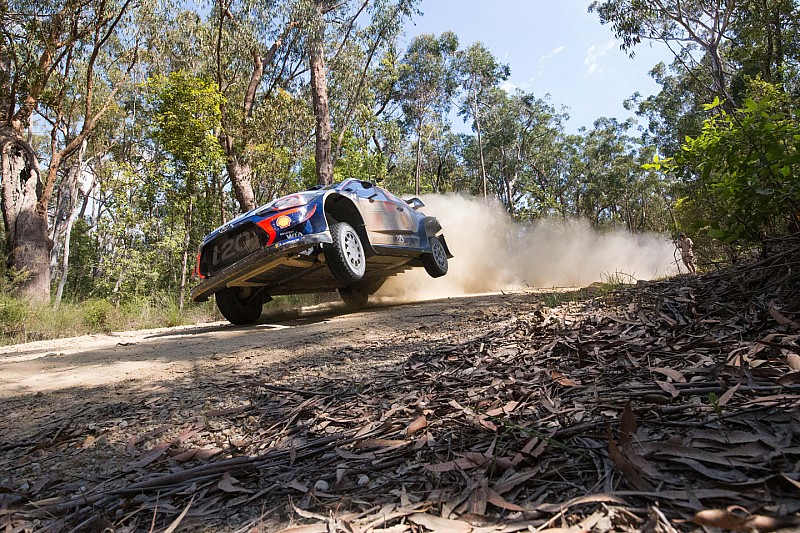 Thierry Neuville is officially out of the running for the World Rally Championship title, after crashing out of the first stage of the final loop.

Hyundai driver Thierry Neuville is officially out of the running for the World Rally Championship drivers' title, after crashing out of the first stage of the final loop.

The Belgian driver - in pursuit of his first WRC title having led the points for most of the year - clipped a bank and a tree on the Coramba stage - SS22 - that opened this afternoon's loop.

He managed to limp along the stage for a few metres before pulling into a run-off area and retiring the car after losing the left-rear wheel.

Both he and co-driver Nicolas Gilsoul got out of their i20 WRC and put on their jackets signalling the end of their event from eighth.

The Belgian had a mountain to climb to snatch the title in the final afternoon of the season in Australia, having suffered a puncture and hit chicane on Friday which left him running at the back end of the top 10 for most of Saturday and Sunday.

Had he finished in eighth, two spots behind title rival Sebastien Ogier, he wouldn't have won the title anyway with Ogier leading the points entering the event.

Toyota's Ott Tanak is the third driver in contention for the title, but even if he wins the event and the powerstage - he is currently second - he won't be able to beat Ogier if the M-Sport Ford Fiesta driver maintains sixth.

At stage end, Ogier said: "I haven't seen [Thierry] actually, but I hadn't started the stage when I heard he was off. I was driving the stage like my granny would do."

Jari-Matti Latvala, Tanak's Toyota team-mate, leads the event by five seconds before the afternoon loop started. He could hand the lead back to Tanak to better the latter's title chances, but Hayden Paddon is still close and in contention in third.