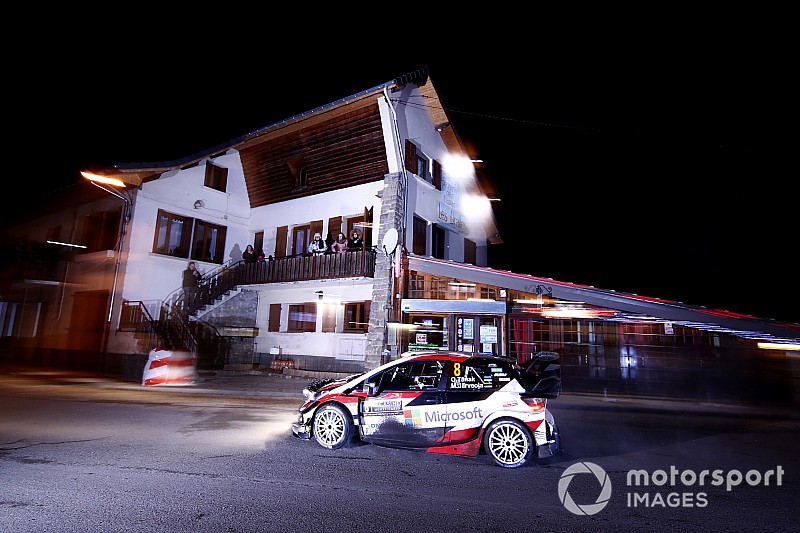 In his first WRC start for Toyota, Meeke was Tanak's closest challenger as the Yaris duo set a commanding pace on the La Breole-Selonnet stage that kicked the season off – the pair five seconds apart at the finish.

But Meeke then picked up a puncture in the final miles of the following Avancon-Notre Dame du Laus stage and the ex-Citroen driver tumbled to seventh overall.

Tanak was only third fastest on SS2, but retained an overall lead of 9.1s over Sebastien Ogier's Citroen. Thierry Neuville set the pace on that stage, moving up to third and closing to within 14.3s of leader Tanak in the process.

Hyundai driver Neuville had taken the boldest tyre choice of the evening, setting off with mostly supersoft slick tyres despite snow having hit the stages.

He floundered on the ice and snow that affected much of SS1, where he was only fifth fastest and nearly half a minute from Tanak. But in the clearer conditions of SS2, Neuville flew.

Loeb had been the best of the Hyundais on the first stage and began his new WRC era fourth-fastest. But he plunged to eighth on the next stage, having taken primarily studded tyres and therefore struggled on the dry roads.

Loeb is still within 10s of fourth place, sitting in a group of drivers already a long way from the podium battle but packed close together.

Citroen's other new signing Esapekka Lappi leads that gaggle in fourth, half a minute away from Neuville in front, and just ahead of Toyota's Jari-Matti Latvala, the leading M-Sport Ford of Elfyn Evans, Meeke, Loeb and the third Hyundai of Andreas Mikkelsen.

Evans is already carrying M-Sport's hopes virtually alone, with new teammate Pontus Tidemand a long way off the pace in a cautious 10th on his return to the World Rally Car class and Teemu Suninen having crashed out early on SS1.

Check out the action from shakedown...