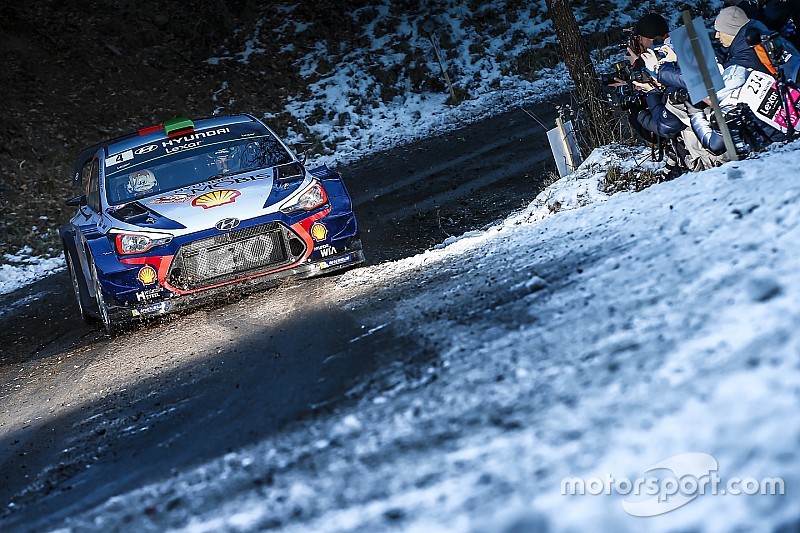 The opening stage of the Rally Monte Carlo has been cancelled after Hayden Paddon crashed his Hyundai on the first test of the new WRC season.

The Kiwi was almost at the end of the stage when he lost control of the car under braking for a slippery left hand corner usually taken in second or third gear.

The car slid wide and went rear-first up a bank, with the car damaged on the rear right quarter. The car came to rest on its side in the middle of the stage, forcing organisers to halt the action.

Hyundai has reported that Paddon and co-driver Jonathan Kennard are unhurt but rally organisers confirmed a spectator had been injured.

A statement from Christian Tornatore, race director, read: ‘‘SS1 has been cancelled due to the crash of Paddon and Kennard. The crew is unharmed. A spectator passed out. The emergency services have been called to rescue him. SS2 is maintained as expected at 11.07 p.m.’’

Dani Sordo got through to the stage – as had Sebastien Ogier and Thierry Neuville – but the cars behind which included Jari-Matti Latvala, Ott Tanak, Kris Meeke, Craig Breen and Stephane Lefebvre were all had to slow or stop on the stage.

Neuville was quickest through the stage at the time of the incident, after early pacesetter Ogier had lost four seconds through the final split.

Elfyn Evans – returning to the top class in the WRC in 2017 with the M-Sport-run DMACK team – was sat on the starting line just about to head into the stage before the incident.