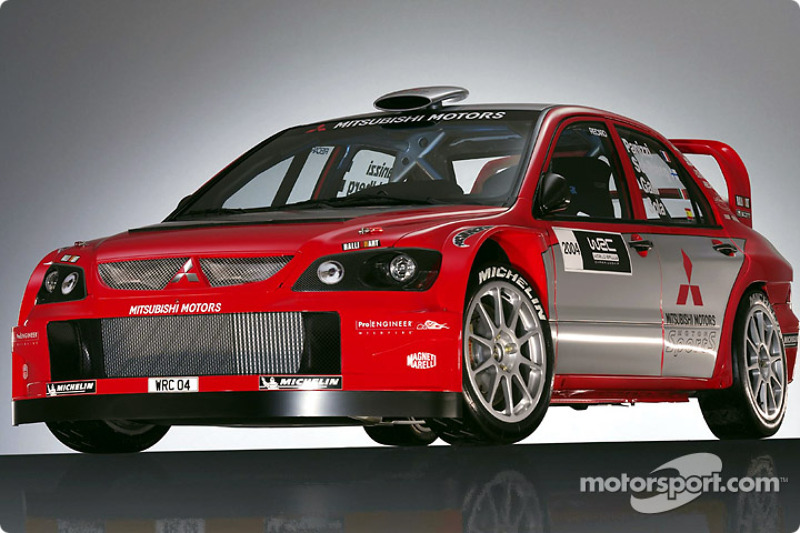 Mitsubishi Motors motor sports subsidiary, MMSP, unveils the car that will spearhead its 2004 FIA World Rally Championship campaign, the Mitsubishi Lancer WRC04. A completely fresh design, the new car forms an integral part of a meticulously conceived long-term plan to build on MMSP's distinguished record in the World Rally Championship. It will compete on all 16 rounds of the series. 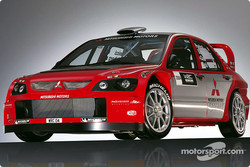 Studio shoot of the new Mitsubishi Lancer WRC04.
Photo by Mitsubishi Motors Corporation.
World Rally Car rules demand that the competition car is derived from a family of showroom cars, made in quantities of at least 25,000 per year. The Lancer WRC04 is therefore based on the standard Lancer, but as its dramatic appearance indicates, it has little in common with previous Mitsubishi World Rally Cars. Once again, it draws on Mitsubishi Motors' worldwide resources, combining Japanese and European capabilities, but it reflects a fresh design strategy and has been created by a new, youthful engineering team. The project has been overseen by MMSP Limited Managing Director, Mario Fornaris at MMSP's base in Rugby, in Great Britain.

MMSP will treat the 2004 season as a learning process, in which it creates a car and a driving team ready for success in the years ahead. For that reason, it has gone back to first principles to create a Lancer World Rally Car that is a sound basis for a rally winner in all conditions. 2004 will be an exercise first and foremost in laying the foundations for future success.

"The car is quite different from our previous World Rally Car. We have made something like 6,000 new parts. We have taken advantage of the freedom permitted by the World Rally Car regulations, but my philosophy is to do very simple things and to have a good understanding of the car before we introduce more advanced systems", Fornaris explained. 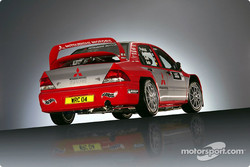 Studio shoot of the new Mitsubishi Lancer WRC04.
Photo by Mitsubishi Motors Corporation.
The Lancer WRC04's appearance reflects the increasing importance of aerodynamics in World Championship rallying. MMSP spent almost three weeks testing in the Lola racing team's wind tunnel, re-designing the bonnet, along with the front and rear wings, as well as the rear aerofoil. The first priority was to gain more down force, but close attention was also paid to airflow through the engine bay to maximize cooling. It is a perfect illustration of the strenuous yet conflicting demands that the World Rally Championship imposes. Down force is a vital element of a competitive car on high-speed rallies, but good cooling is a key requirement on a turbocharged rally car, as the ambient temperature on rallies can exceed 30 degrees Celsius and it is often highest on the rallies held at the lowest average speeds. Airflow beneath the car was also considered.

In designing the chassis, the emphasis has been not just on good handling, but on strength, simplicity and ease of maintenance. The car uses McPherson strut suspension all round. It is a robust system and to make servicing straightforward, components are often interchangeable not only front and rear, but left to right as well. Most suspension components will be made of steel, to ensure reliability. The Lancer WRC04 will use specially modified Ohlins dampers, like its recent predecessors, building on a fruitful past relationship. The steering rack and cross members are also new designs, partly because the engine has been relocated, tilted 20 degrees rearwards to improve weight distribution.

The 16-valve, twin-cam, two-liter engine belongs to the 4G6 family used so successfully in previous Lancers. It employs the well proven cast iron block and an aluminium alloy cylinder head, but it has also benefited from significant alteration. First and foremost, it is based on the version of the engine fitted to the new and highly popular Lancer Evo VIII showroom car, but with a new turbocharger, fitted with the regulation 34-millimetre intake restrictor, new intake and exhaust manifolds, and new internals. Although the bore and stroke remain unchanged, the crankshaft, connecting rods and pistons have been lightened and the electronic management systems are new. MMSP has turned to Magneti Marelli to supply its electronics for the first time, using an advanced engine management package that doesn't rely on fuses or circuit breakers. There are two control units, one for the engine and one for the chassis. As the system is fully integrated, each is capable of controlling all electronic functions throughout the car. The system saves weight and enhances reliability.

The transmission also reflects MMSP's new strategy and has nothing in common with the four-wheel-drive systems used on previous Lancers. The 2004 car will use a transversely mounted five-speed gearbox supplied by Ricardo. The gear change will be manual and all three differentials will be passive, an epicyclical center differential splitting torque front to rear. The front and rear differentials will also operate on mechanical principles.

"With the current regulations in the World Rally Championship, because the engines have quite small restrictors, the power curve and the torque are so good that it makes it possible to use a five-speed gearbox. Why have six gears when you can have five? We will analyze different possibilities as we develop the car and will introduce new features as necessary", Fornaris explained.

The decision to use passive differentials is unusual, but reflects MMSP's determination to ensure that the chassis is fundamentally sound and effective before introducing refinements. A semi-automatic gear change is likely to be developed during 2004, once MMSP is satisfied that the Lancer WRC04 is living up to its potential, in terms of both performance and durability. Active differentials are also under consideration, but are not an immediate priority.

Brembo will supply brakes and once again, MMSP is placing the accent on simplicity. The braking system will not incorporate water cooling initially. 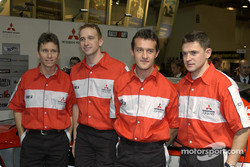 Mitsubishi WRC 04 drivers line-up: Gilles Panizzi;Kristian Sohlberg;Daniel Sola and Gianluigi Galli.
Photo by Mitsubishi Motors Corporation.
The Lancer WRC04 began testing in mid-October and will undergo a comprehensive development program in readiness for its first appearance on the 2004 Monte Carlo Rally, when French star Gilles Panizzi leads an all-new driving team. In its first three months, the new Mitsubishi will face tarmac and ice in Monte Carlo, snow in Sweden, and dusty loose-surface stages in Mexico.

"We are not expecting too much from the car at first. At the moment, it is too early to say anything about performance. It is very new and we have had very little time to design and test it. We can expect a few problems in the test period, as you would with any prototype car, because the test schedule is very tight. The idea was to do something quite simple to start with. We know we have plenty of things to learn. I hope it will be a little bit faster than the old car at first. We will try to develop the car step by step and I hope in the second half of the season that the car will become more competitive. We can make progress faster this way, but we are not expecting instant results. We are competing in a tough environment", Fornaris stated.