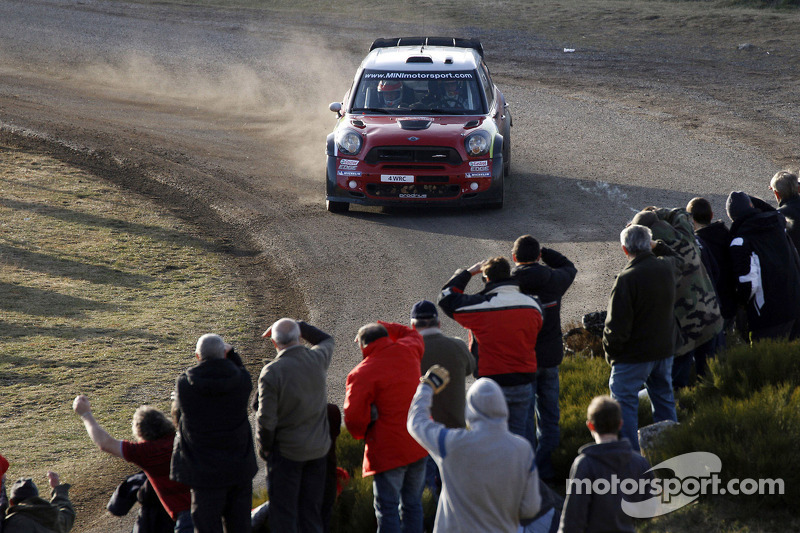 The sunshine came out and the temperatures rose for day four of the Monte Carlo Rally. With not such difficult tyre choices the teams were able to concentrate on other aspects of this classic event, and it was another good day for the MINI WRC Team as Dani Sordo (ES) and Carlos del Barrio (ES) and Pierre Campana (FR) and Sabrina de Castelli (FR) are still lying second and seventh respectively. 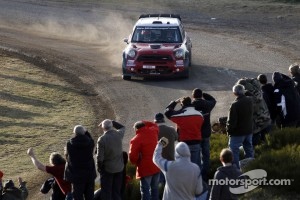 The Col de Turini is one of the most famous and perhaps feared stages in rallying and today’s first and third stages were run here. The stage, known as Moulinet – La Bollène Vésubie, at 23.41 kilometres was shorter than it has been in the past, but one of the main differences was that it was completely dry with none of the thick snow it is famous for. This did not deter the thousands of spectators to go there to watch the stage run in both daylight and the dark.

The driver who had a lot to do today was Petter Solberg (NO), who at the start of the day had Mikko Hirvonen (FI) breathing down his neck just 23 seconds behind and was also targeting Sordo, who was just over a minute in front. He was quickest on three of the four stages and second quickest on the remaining one. At the overnight service in Monte Carlo he had closed the gap to Sordo to 19 seconds, but opened the one to Hirvonen to over a minute.

With all the stages being dry and the temperatures relatively high, tyre choice was not as fraught as it had been yesterday, but still the team was careful with what it gave Sordo and Campana for their MINI John Cooper Works WRCs. For the first two stages both cars had hard Michelin tyres, and then for the second loop soft tyres.

There is just one stage on Sunday and it is the 5.16 kilometre Power Stage at Ste Agnès – Col de la Madone. This will start at 10.08, and the first car is due back at the harbour side service park just after 11.00.

Dave Wilcock, Team Principal:
“It has been a pretty good day. The objective was to consolidate second position for Dani. I think the first stage took him a little bit by surprise, as he took it too steadily and shocked himself a little bit and took a while to recover. At service we had a chat about it and went through the data to explain where we thought it might have all been going wrong and he took some strength from that. We altered the set up a little bit for the evening stages by stiffening the car up slightly. The conditions had been cooling throughout the evening, and our weather reports were showing zero to minus one ground temperatures at the top of the Col, so we selected the soft tyre for safety and confidence. Maybe the hard tyre was the ultimate in terms of performance, but in terms of getting Dani’s confidence back it was the right thing to do. For the Power Stage we have allowed ourselves a full selection of tyres by ensuring our tyre usage has allowed us that. Pierre has had a very solid afternoon in all the stages, setting some very good splits, and should be very happy. He had a small spin on stage 16, which cost him a little bit of time, however, he recovered from it well and went on to set a good time in the final stage of the evening.”

Dani Sordo (MINI John Cooper Works WRC No 37):
“I am quite satisfied because we are still in second place, but to be honest I am not really happy today as I lost a lot of time to Petter Solberg. He was pushing really, really hard in the first two stages and took 25 or 26 seconds off me, which is a lot. Yesterday was more fun as I did better times. Tomorrow there is just one stage of five kilometres so it will be difficult for Petter to overtake me. I will try to do my best in this stage, but I want to be on the podium and this is a really tricky and narrow stage.”

Pierre Campana (MINI John Cooper Works WRC No 52):
“It was a very good day for me and I think I understand more about managing the car. It is very important to drive the car to get this experience. The Col de Turini is a fantastic stage. There were a lot of people at the top of the stage and this was incredible, but the people were crazy!”