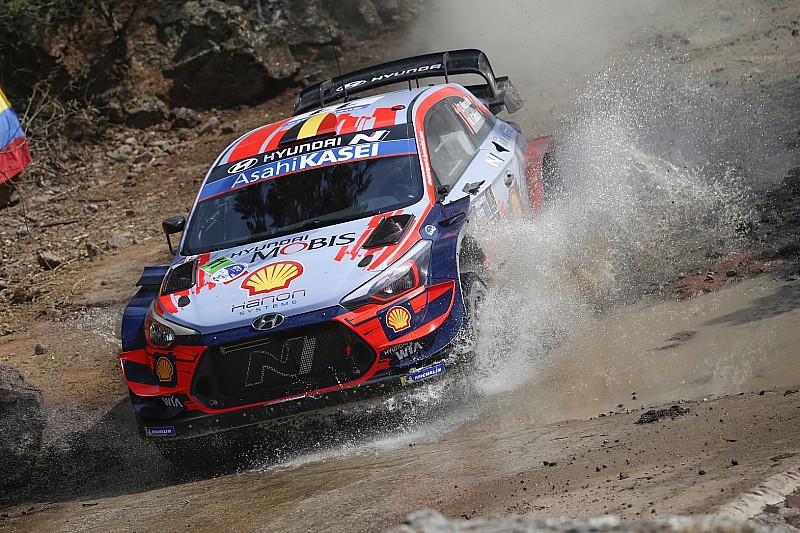 Joint WRC points leader Thierry Neuville stunned a capacity crowd on the historic streets of Guanajuato to take the overnight lead at the start of this year’s Rally Mexico.

Hyundai’s Belgian star relishes the now-traditional 910-metre sprint, which the field tackled twice in a tyre-smoking celebration of sport laid on for the hugely passionate local fans.

On his first pass through the stage, Neuville’s time of 59.1 seconds put him 0.4 seconds in front of the man with whom he shares the points lead, Toyota’s Elfyn Evans.

On his second run, the imperious Neuville cut his time to 57.5 seconds, and although Evans also improved he could not get closer than 0.7s from the Belgian’s benchmark.

“With the road position on Friday, it’s the only stages where we have more or less equal conditions and we can try to catch back at least a second or two,” Neuville said. “If there could be even more it would be even better for us!”

Behind the lead battle, the rest of the WRC field traded tenths of a second over their two runs, with defending champion Ott Tanak emerging third on the overall leaderboard, 1.9 seconds shy of his Hyundai teammate Neuville.

Six-time champion Sebastien Ogier had been preoccupied all day with concerns for public health amid the coronavirus pandemic and, after a relatively muted performance, went to the overnight halt in sixth place, 2.5 seconds behind Neuville.

Speaking after setting the third-fastest time in the shakedown, the Toyota driver said: "Some issue I had today was more in the mind. It was difficult for me to be in the race to be honest this morning I was just - I almost didn't sleep last night.

"That's the only concern I had this morning but if the race has to go on definitely tomorrow I have to switch that off my mind and focus on the race because like this morning I was a bit of passenger in the car and that's not the way you need to drive a race."

Seventh place belonged to British youngster Gus Greensmith (M-Sport), who survived clattering into the kerb on his first run to keep his nose ahead of Toyota’s teenage sensation Kalle Rovanpera and Esapekka Lappi (M-Sport).

Friday’s route sees the field head into the mountains for six rough-hewn gravel stages, including two passes through the fabled 31.57-kilometre marathon of El Chocolate.

Both Evans and Neuville, running first and second on the road, will act as ‘sweepers’ for the rest of the field and share some trepidation about remaining at the top of the order.