M-Sport: Team orders only an option with a “clear 1-2” 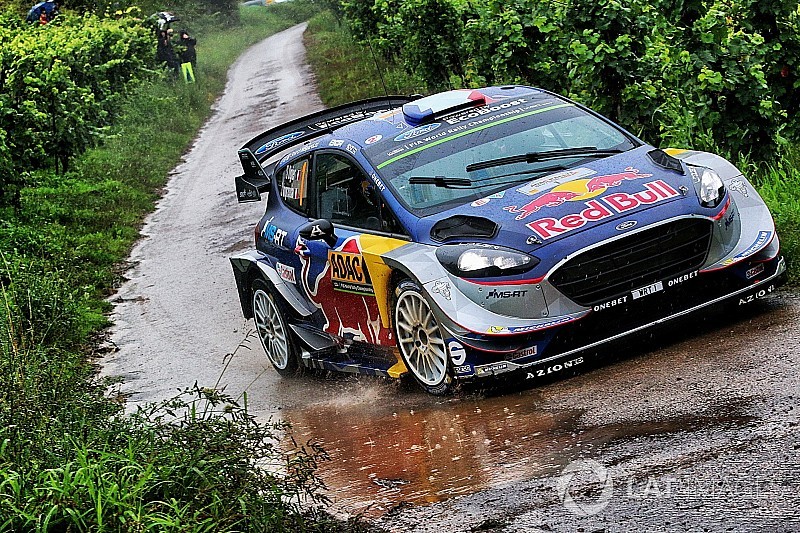 M-Sport team boss Malcolm Wilson says ordering Sebastien Ogier ahead of Ott Tanak in Rally Germany will only be an option if his drivers are running in "a clear 1-2".

Ogier’s teammate Ott Tanak leads the rally by 25 seconds over Citroen’s Andreas Mikkelsen, with the Frenchman a further eight seconds down and six stages - two on Saturday and four on Sunday - left to run.

The series' defending champion, Ogier had entered Germany level on points with chief title rival Thierry Neuville of Hyundai, with Tanak 41 points behind the pair.

And when Neuville retired at the start of Saturday's running, speculation began to build of a tactical approach to the second half of the event from M-Sport.

While Wilson advocated the use of team orders for this season at the start of the year, he insists he has no interest in allowing Ogier past Tanak if this were to hand victory to Citroen.

“I’d be completely crazy to do that,” Wilson told Motorsport.com. “There’s no way I’d [slow Tanak down] and let Mikkelsen win. I have to think about the manufacturers’ championship as well.

"Right now it’s too early in the event to be talking about that and, maybe, if it became a clear 1-2, then that could be something to talk about, but right now? No chance.

“And anyway, haven’t you missed something? A Tanak win would put him right up there and closer to Neuville.”

Neuville to go all-in on Sunday

For his part, Neuville, who will rejoin the rally on Sunday and go for Power Stage points, says he will adopt a win-or-bust approach.

"Tomorrow will be a full attack,” he said. “I have no choice.

"I have to hope Andreas can stay ahead of him [Ogier] and I will try for five points in the Power Stage. If we go off, we go off and if we get them, we get them.

"The championship is still open, I'm optimistic about things.”

Recalling the issue that took him out of contention in the day-opening SS9, Neuville said: "We went into a cut and when we came out of the cut, we broke the suspension. It was probably a bad impact on the wheel and from there it was gone.

"When we came out of the cut, I heard a noise and the transmission and driveshaft was gone straight away and then the suspension was gone as well.

“When I saw the wheel at the side of the car, I was surprised. I thought maybe the rim was broken or something like that. Sometimes you have the big impact with no damage and sometimes it’s the other way around.

"If we had gone to the trees and destroyed the car I could be angry with myself, but now I have to accept this and look forward and keep the motivation for the next rounds, it’s still long.”

The Belgian denied there was a problem with taking the cut: “It’s a second or third-gear corner. I have known this corner for the last four years. There was an impact on the inside of the wheel.”