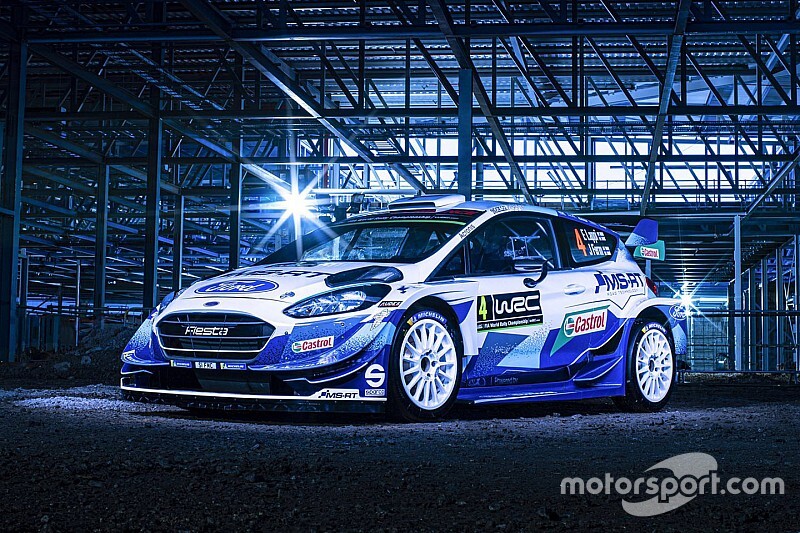 The car, which features a mainly white and blue paint scheme for 2020 instead of the predominantly blue and silver livery of last year, is inspired by the early 1990s Ford World Rally Cars, according to M-Sport boss Malcolm Wilson.

Wilson mentioned the livery of 1993, with the then manufacturer-run Ford Escort RS Cosworth run out of its infamous Boreham base and driven by Francois Delecour, the Frenchman narrowly missing out on the championship to four-time champion Juha Kankkunen.

The livery also featured in 1994 when Delecour won the Monte Carlo Rally, but suffered extensive injuries in a road accident while driving a friend’s Ferrari F40 soon after.

That ruled him out for the rest of the season, and the only other success that year came with a young Tommi Makinen’s first WRC win in a one-off outing on his home rally in Finland.

Speaking at the Autosport International Show, M-Sport’s Wilson said “the theme of it from our designer came from Francois Delecour’s car, from 1993 when he nearly won the world championship, a lot of the base of the livery came from that car”.

Team principal Richard Millener added: “We wanted to try and look back a little bit at some of the liveries of the past, but at the same time try and have a bit of a modern feel to it and we have a very good designer internally who came up with it.

“It’s a bit of a mix of everything.

“It’s a fresh change, we’ve had quite similar colours for a couple of years so its something completely different, new team, new start and go from there.”

M-Sport had previously confirmed its 2020 driver line-up, with ex-Toyota and Citroen driver Esapekka Lappi signed to lead the charge alongside Teemu Suninen and a part-programme for Gus Greensmith.

Wilson believes an engine upgrade for the fourth round of the series should have the Fiesta challenging for victories again after a winless year in 2019.