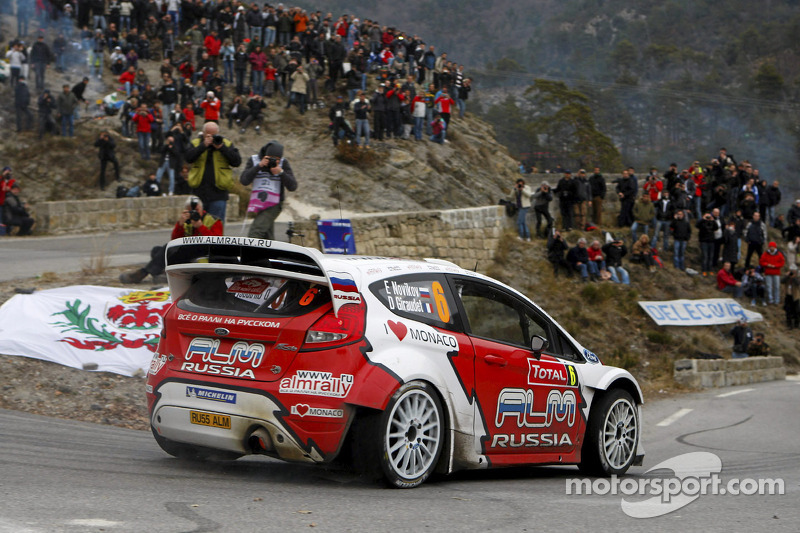 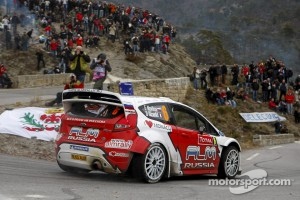 Taking in two of Rallye Monte-Carlo’s trademark stages – Moulinet/La Bollène Vésubie and Lantosque/Luceram – the M-Sport Ford World Rally Team ventured south from Valence to the Principality of Monaco for the penultimate day’s rallying on the French Riviera. Covering 84.44km over four competitive stages, Evgeny Novikov closed in on what could be his best ever WRC finish tomorrow with fifth place. Continuing his impressive return to the WRC, François Delecour maintained sixth with rookie Ott Tänak securing his position with a mature drive in eighth.

Again, tyre choice proved pivotal. Finding themselves on the soft as opposed to the optimal hard tyre, Novikov and co-driver Denis Giraudet were restricted on the opening loop. Despite being severely disadvantaged, the pairing continued their mature drive to retain fifth place overall. Adapting well to the conditions, Novikov posted top-ten times on both stages, just 26.7 seconds adrift of pace-setter, Petter Solberg, on the harder rubber through SS15.

With limited running on night stages, the young Russian continued to show maturity beyond his years over the evening loop. Given his limited experience, Novikov set some impressive times with further top-ten placings on the penultimate stages.

Delecour encountered issues with the power steering assistance on his Ford Fiesta RS WRC. Notwithstanding these problems, the Frenchman proved what makes him such a specialist around the Monte-Carlo stages with the fourth fastest time on SS14, just 7.7 seconds adrift of stage winner, Mikko Hirvonen. His steering problems persisting into SS15, Delecour and co-driver Dominique Savignoni produced an incredible performance on the narrow and twisty roads to secure the fifth fastest time.

With replacement parts fitted in service, Delecour was back on form over the evening loop. Despite some issues with the intercom at the beginning of SS16, the Frenchman secured the third fastest time on both stages – just 4.5 seconds adrift of Sébastien Loeb over SS16, and 1.9 seconds shy of the eight-time world champion over SS17.

Impressing on his first experience of the difficult Monte-Carlo stages, Tänak continued his mature drive into Day 4. Gaining experience with every stage, the Estonian made the intelligent decision to run the optimal hard tyre over the morning loop. With countryman Kuldar Sikk in the navigator’s seat, the pairing set the fifth fastest time on SS14 - just 11.9 seconds shy of pace-setter Hirvonen. Managing his tyres, the young Estonian regained his regular place in the top-ten with another strong time through SS15.

Embarking on only his second night stage in the Ford Fiesta RS WRC, Tänak’s composure shone through once more. Taking it in his stride, the Estonian was undaunted, approaching the evening loop as he would any other to claim his regular top-ten time slot over the final two tests.

“We don’t want to take any risks. These stages were very difficult, especially to drive at night. The other guys have done these night stages maybe 10 times or even more so for sure it is difficult for us to fight with them.

“We’re just trying to get the car home and keep fifth place. It will be my best ever finish so right now I just want to get to the end.”

“This evening was not so bad. We had a problem with the intercom again in the first stage [SS16] which might have cost us some time but we swapped helmets for the second [SS17] so then it was all ok.

“The atmosphere here is incredible! I’m ready to go back out again, to go and impress the fans for another loop! I’m really having a lot of fun and enjoying my time here with my friend Dominique [Savignoni]!”

“[This evening] was ok. We had hard tyres which I think was the right choice. The first stage [SS16] was good but it was difficult to find the traction and get enough heat into the tyres in the second [SS17].

“For sure we can go a lot faster, but we have nothing to gain by doing that. We’re taking it sensibly and getting to the end of the rally. I don’t want to do anything crazy.”