It was a day of celebration for Ford and their lead driver, Jari-Matti Latvala, as the Finn notched the 50th FIA World Rally Championship victory for the manufacturer and their long-time partner M-Sport. Celebrating with Latvala was his long-time co-driver Miikka Anttila as the duo sealed their second Rally Sweden win.

“Four years ago I won my first world rally here and became the youngest driver to do so,” said Latvala. “To come back and win for a second time is very special.”

Ford World Rally Team director Malcolm Wilson was pleased with the 50th WRC win and said, “Jari-Matti dominated from start to finish. We had a scare towards the end. This morning we were concerned that he drove so fast when he had a big lead, but given what happened this afternoon, it’s a good job he did. It’s a milestone victory for the team and with the confidence he has in the car, I’m sure there will be more to come."

The Finn owned the second rally on the 2012 calendar from the first leg of the true winter event. For the past six events in the Nordic rally, Ford has landed on top. It was not a perfect day for Latvala as he hit a rock and punctured the right front tyre of his Fiesta RS before the final two of the six stages of the day. It cost the Finn time as his lead over Mikko Hirvonen was cut from 35.6 seconds to a mere 8.4 seconds.

It feels like a heavy weight has been lifted from my shoulders.

Latvala ended the final leg with three stage wins, which gave him a total of nine in the Swedish rally. He now sits fourth in the 2012 overall points despite the fact that he crashed out of the Monte Carlo Rally on the opening day. He commented, “After retiring from the first round last month, I was under heavy pressure to do well. After making a mistake and hitting a rock, I knew I had to summon some extra speed and attack hard through the penultimate stage.

“It feels like a heavy weight has been lifted from my shoulders. I’ve learned to stay calm when things go wrong and that paid dividends today. I knew Mikko would attack hard this morning so I was wide awake and ready for it. I had a comfortable lead before everything changed with just two stages to go, but I kept my cool,” the Finn added.

Second-place finisher, Hirvonen, was ready to close the 23 second gap to his former teammate but knew it would be a difficult task, especially with a new layer of snow overnight. He and his co-driver Jarmo Lehtinen were not able to capitalize on Latvala’s puncture in their new ride with the Citroen factory team. The Finn’s best finish in the DS3 for the French team today was third (twice) and both were due to the top Ford team drivers having punctures.

In the opening loop of the stages, he lost another 10 seconds and said, “I wasn’t comfortable on the first stage, we made some changes to the set-up but I found the car difficult to drive on the narrow sections.” 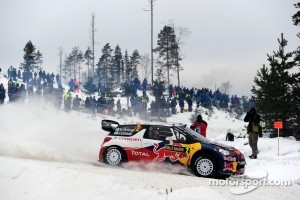 With Hirvonen’s finish today, he moves into second in the drivers’ standings behind his new teammate, the 8-time consecutive WRC champion. He said, “I can’t be totally satisfied as I didn’t win but the result is nonetheless a positive one. We worked well with the team and my feeling in the car has improved further. Although we are going to totally change surface for the next few rallies, all of this will be useful to me in the next event.”

Mads Østberg and his co-driver Jonas Andersson took over the final podium spot for a fine third place finish in their M-Sport Adapta Ford. They did have a bit of luck finishing ahead of the Ford factory team’s Petter Solberg. Still the younger of the Norwegian drivers continues to prove he is a top competitor as he earned two stage wins today to nail down his second consecutive Rally Sweden podium.

Østberg said, “For me this third position was really important and it was also really important for me to win the fight with Petter [Solberg]. Of course he had a puncture but it was due to us pushing, it could have happened to either of us, but it happened to him so I am thankful for that!”

Ford’s Petter Solberg ended up hitting the same rock that caused his teammate’s Latvala puncture. While he and his co-driver Chris Patterson had to deal with their Ford Fiesta RS tyre, the loss of time cost them the podium finish. The Norwegian finished fourth and now is third in the title fight after the second rally of the season. Solberg was able to take second in the Power Stage to garner bonus points.

“I was disappointed to lose third, but I’m third in the championship and closed on the leader so it was a good weekend,” he said. “I hit the same rock as Jari-Matti. I wasn’t cutting the bend but it was in the middle of the ruts and I couldn’t avoid it. It’s my first rally in the Fiesta RS WRC on the loose and I’m really encouraged to have been so competitively so quickly,” said the Norwegian. 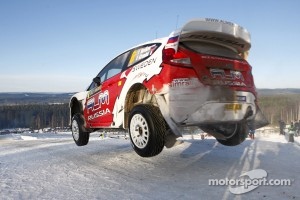 Taking fifth in the winter rally was Evgeny Novikov and his co-driver Denis Giraudet for the M-Sport Ford World Rally Team. The Russian equaled his finish and is one of the younger racers who aim for WRC event wins. It was not an easy task in today’s final leg as he had the defending 2011 champion, Sebastien Loeb, pressuring him throughout the day.

Novikov now holds fifth in points and he commented, “The rally was very good. I think fifth place is another very good result for us. Yesterday my main aim was to not let Loeb get past and we did that so I am happy. It was quite difficult for us being our first time here in Sweden and not knowing the stages, so another fifth place is really very good.

On a positive note, the Russian added, “Now I look forward to Mexico where I think we can have an even better result.”

Loeb pushed as hard as he possibly after he slid into a snow bank on leg one. The Frenchman was 11th after the incident on the seventh stage. By the end of the day, the Citroen ace was up to seventh but a ten second penalty dropped him back to 11th before the start of leg two. The loss of time put him out of contention for a podium finish. He proved why he is an eight times champion when he moved up to sixth before today’s final loop. He pushed hard today but was unable to overtake the Russian for fifth.

“I have rarely driven on stages as unpleasant as those here. Obviously, it’s very slippery but there are also large rocks everywhere, so it’s difficult to push hard without taking huge risks,” said Loeb. 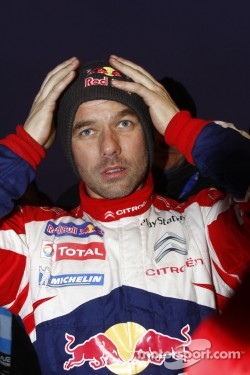 The champion still holds down the overall points lead and won the Power Stage for the three bonus points and he said, “I can’t be happy with the result, but we managed to do the main thing, which was to achieve the best possible point scoring in the circumstances. We still lead the World Championship going into a long series of gravel rallies. Unlike Sweden, I have always done well in Mexico and I can’t wait to bounce back there.”

Scoring seventh were Henning Solberg and Ilka Minor in the M-Sport prepared Go Fast Energy World Rally Team car. They handed Ford five finishes in the top eight! “It has been a very nice rally for me. To come here with no testing and get a good few points is really very good for me and the team so I’m very happy,” said the Norwegian.

Landing eighth was Patrik Sandell and his co-driver Staffan Parmander. The Swedish driver was consistent in his debut in the MINI John Cooper Works WRC. The 2006 FIA Junior World Rally Champion was ecstatic to take a points paying position at his home race: “It’s been a fantastic experience and to finish in eighth on my debut in a World Rally Car with so many great drivers ahead me is a very good result.”

Sandell added, “The balance of the MINI WRC has been really good and it is so easy to drive fast. Over the weekend my speed has been coming more and more and I hope next time out in a WRC to be in the top five and after that to aim for a podium. The way the Prodrive team has supported me has been fantastic and I have learnt so much from them. Without their support I don’t think I would have improved so much during the weekend.”

The WRC this year started with Latvala crashing out in Monte Carlo and Loeb losing time this weekend due to an error. One can hope that the two go head-to-head in the next event. Rally Mexico will not have the snow and ice or the cold temperatures but it will not be easy on the first gravel route in the new season. 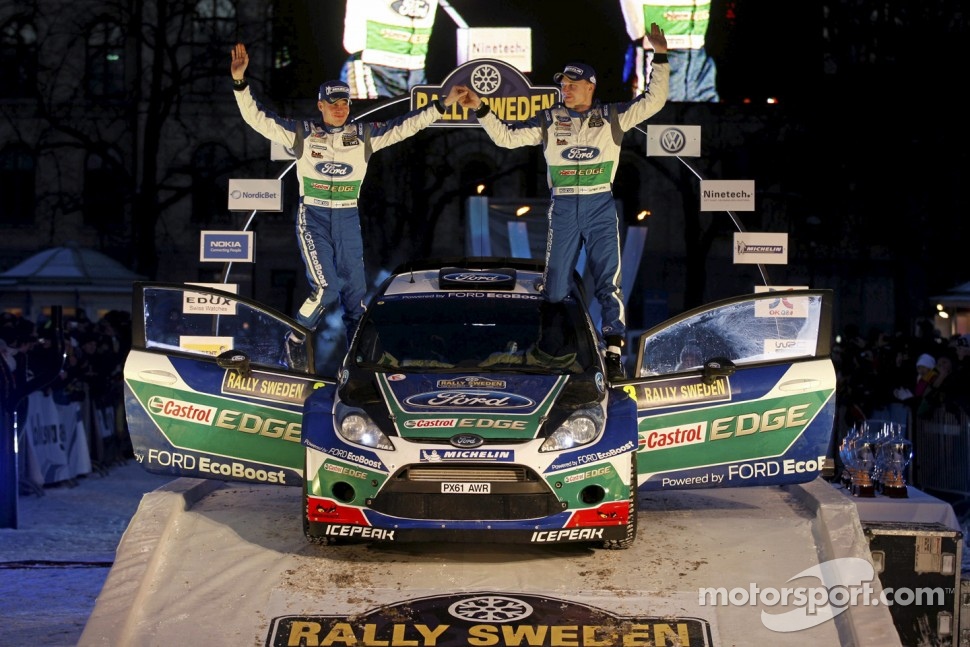