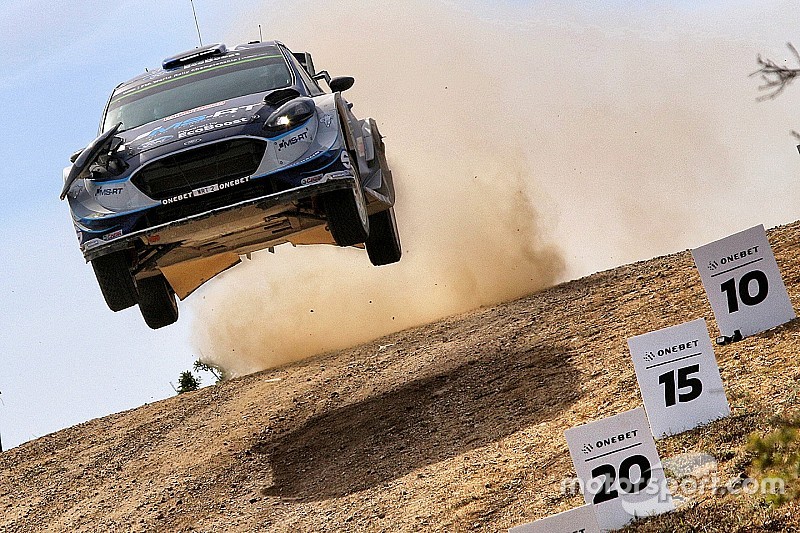 Tanak came close to winning the 2016 edition of Rally Poland when he lost the lead in the penultimate stage with a puncture, and this year's Portuguese rally, where he crashed from first place on Saturday.

The 29-year-old inherited the lead in Rally Italy after Hyundai's Hayden Paddon crashed on Saturday afternoon.

The Estonian ended that day with a 24-second lead and maintained his gap over Jari-Matti Latvala throughout the final day of action.

Latvala took his first podium finish for both himself and Toyota since his second- and first-place finishes in the first two events of the season.

The Finn lost a couple of seconds in SS17, the second of the four stages, after stalling and pushing "the stop button instead of the start button".

He also made a small error in the Power Stage by running wide at a hairpin, missing out on winning the test by 2.3s, which left the Finn massively frustrated.

The Toyota rookie completed his only second rally in a WRC car in fourth, impressively taking the most stage wins with six.

His teammate Juho Hanninen was struggling with steering issues and gave up fifth to Sebastien Ogier despite starting the day 44 seconds in the clear.

Norwegian duo Mads Ostberg and Andreas Mikkelsen completed the top eight, the former losing two minutes after having to tackle the most of the Power Stage with a broken rear right wheel.

Mikklense finished his first WRC rally with Citroen more than eight minutes behind the winner, as the top representative of the French marque.

After crashing on Saturday, Paddon went off again in the penultimate stage.

Other main-class drivers to finish the rally were Dani Sordo (Hyundai) at 17 minutes behind and Craig Breen (Citroen) and Elfyn Evans (Dmack), who were both 44 minutes adrift.