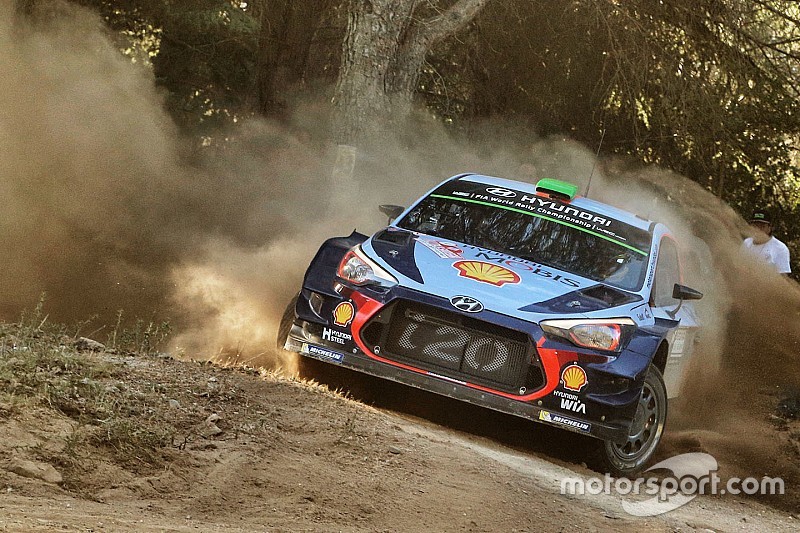 Hayden Paddon continued to lead Rally Italy by less than 10 seconds on Saturday morning with Ott Tanak taking over as the main challenger after Thierry Neuville hit trouble.

The order throughout the morning leg remained relatively unchanged, with Paddon and Neuville taking turns in topping SS10 and SS11, beating one another by around four seconds.

But the Belgian, Paddon’s Hyundai teammate, had no brakes from the start of the Monte Lerno SS12 stage and fell to fourth, ending the morning 1m10.7s behind.

M-Sport’s Tanak was promoted to second and duly went quickest on the last stage of the morning to be 9.4s adrift Paddon, who struggled with his tyres.

Toyota man Jari-Matti Latvala lies third, but demanded that the organisers award him some time back after he was caught in the dust of the privateer Ford of Mads Ostberg, who'd slowed with a puncture.

Latvala dropped nine seconds to Tanak and sits 13.8s behind the Estonian in the order.

Behind Neuville in fourth, Juho Hanninen was also promoted on the last stage of the morning to fifth as championship leader Sebastien Ogier collected a puncture, having overtaken Hanninen on the previous stage.

Ogier fell to seventh, with Hanninen’s Toyota teammate Esapekka Lappi also moving ahead of the four-time champion and into sixth.

Ostberg lies eighth after his puncture, while WRC returnee Andreas Mikkelsen (Citroen), one spot behind, also suffered a puncture on that same Monte Lerno stage which rounded out the morning.