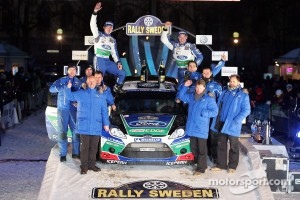 Ford World Rally Team drivers Jari-Matti Latvala and Miikka Anttila won Rally Sweden today by 16.6sec after a tense finale to this second round of the FIA World Rally Championship. Victory in a Ford Fiesta RS World Rally Car was Ford’s sixth consecutive success at the only true winter rally of the season.

It was Latvala’s second win in Sweden, and it came despite his comfortable lead being slashed when he hit a rogue rock and punctured a tyre with just two more speed tests remaining before the finish. Team-mates Petter Solberg and Chris Patterson finished fourth in another Fiesta RS WRC, losing a potential podium position when they hit the same rock, with the same outcome.

It was the 50th world rally win for the Ford / M-Sport partnership since it started in 1997, and Fiesta RS WRCs filled four of the top five places.

Although temperatures were milder than normal, the snow and ice-covered roads presented a tough challenge as the mercury hovered around -10ºC. After an opening leg based mainly in Norway, the rally returned to Sweden for the final two days’ competition close to Hagfors. Drivers tackled 24 special stages covering 349.16km before this afternoon’s finish in the host city of Karlstad.

Latvala stamped his mark on the rally from the first moment, by setting fastest time in Thursday’s qualifying. It enabled the 26-year-old to select a start position well down the running order, to obtain better conditions after the loose snow was swept away.

He built a 16.8sec during Friday’s opening leg and stretched his advantage over former team-mate Mikko Hirvonen to 23.0sec yesterday, after shrewd management of the stud wear on his Michelin tyres. He extended his lead to 35.6sec during today’s final leg, before hitting an exposed rock in the rutted snow and ice and puncturing the front right tyre.

The lead was cut to just 8.4sec, but fastest time under extreme pressure in the penultimate stage allowed him to pull clear again. It was Latvala’s ninth stage win of the rally.

“Four years ago I won my first world rally here and became the youngest driver to do so,” he said. “To come back and win for a second time is very special. After retiring from the first round last month, I was under heavy pressure to do well. After making a mistake and hitting a rock, I knew I had to summon some extra speed and attack hard through the penultimate stage.

“It feels like a heavy weight has been lifted from my shoulders. I’ve learned to stay calm when things go wrong and that paid dividends today. I knew Mikko would attack hard this morning so I was wide awake and ready for it. I had a comfortable lead before everything changed with just two stages to go, but I kept my cool,” he added.

Urged on by his home fans, Solberg held second on the opening day in Norway before a spin cost time. He ended the leg in third and remained there yesterday, despite pressure from fellow countryman Mads Østberg. The duo were separated by just 4.9sec when Solberg clipped the same rock as Latvala and the 37-year-old had to settle for fourth. However, he claimed bonus points by finishing second on the final Power Stage.

“I was disappointed to lose third, but I’m third in the championship and closed on the leader so it was a good weekend,” he said. “I hit the same rock as Jari-Matti. I wasn’t cutting the bend but it was in the middle of the ruts and I couldn’t avoid it. It’s my first rally in the Fiesta RS WRC on the loose and I’m really encouraged to have been so competitively so quickly.

Ford World Rally Team director Malcolm Wilson was delighted with the landmark victory for the Ford / M-Sport partnership. “Jari-Matti dominated from start to finish. We had a scare towards the end. This morning we were concerned that he drove so fast when he had a big lead, but given what happened this afternoon, it’s a good job he did. It’s a milestone victory for the team and with the confidence he has in the car, I’m sure there will be more to come,” he said.

Ford of Europe motorsport chief Gerard Quinn said: “A victory and seven cars in the top 10 represents a great weekend for Ford. Jari-Matti was in control from the very beginning and even when he received a setback this afternoon, he was strong enough to recover and seal the win. Petter drove well and his speed with a new car so early in the season bodes well for the future.”

News from other Ford teams

Round three takes Ford World Rally Team to North America for the first long-haul round of the season and the opening gravel event of 2012. Rally Mexico is based in Léon on 8 - 11 March.