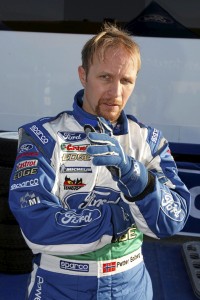 Fifty-nine crews restarted the 80th edition of the legendary Rallye Monte-Carlo today, where the drivers contested three stages covering 77.30km separated by a midday service in Valence. The team and service park infrastructure then journeyed more than 400km south towards the glamorous Principality of Monaco. En route, the drivers tackled a 29.89km test before travelling to Monte-Carlo for the overnight halt.

On an event where weather and road conditions are constantly changing, Solberg opted for four Super Soft Michelin tyres for the morning loop. The gamble for slicks paid off as the Norwegian claimed his first stage win in the Ford Fiesta RS WRC on the day’s opening 23.28km test and moved up into second place.

“It feels fantastic to have won our first stage driving the Ford Fiesta [RS WRC],” said Solberg. “The opening stage was fantastic. It was wet all the way through and the last few kilometres were trickier because there was a little bit of ice but to take the win in such difficult driving conditions was a great feeling.”

The second stage of the day, however, dealt Solberg a poor hand as the 37-year-old was forced to contend with standing water, black ice and thick fog without the luxury of studded tyres. He lost more than two minutes in the poor road conditions and suffered from a spin, which knocked the Ford driver back to third place.

“Stage 12 was unbelievable, I can only describe it as a rollercoaster ride and we were aquaplaning right from the beginning because of all the standing water,” explained Solberg. “There was so much black ice, and with slicks on the rear and no studs on the front it was a nightmare to drive. I thought I would be able to control it but I couldn’t, and I lost so much time because I didn’t have studs like the others.”

The day’s closing stage saw Solberg suffer another dose of bad luck as the Norwegian picked up a slow puncture 6km from the end of the 29.89km test. Despite this, the driver maintains third and is eager to defend his podium spot during the two remaining days of competition.

“Overall, it’s been a good day,” said Solberg. “On the last stage, I made a mistake – I cut a corner very slightly and hit a rock with my front wheel. It was a shame because I was one second up on [Sébastien] Loeb and four seconds up on [Dani] Sordo at that point.

“I’m looking forward to the stages tomorrow and to fighting to preserve my podium position. That’s got to be my goal now. The focus has changed after this morning from fighting Dani [Sordo] for second to holding onto third place. After a difficult day I’m relieved to be here,” he concluded.

“Weather conditions today were unpredictable at times and presented several challenges for the team when making tyre selections,” said Gerard Quinn, motorsport chief for Ford of Europe. “As a team, we were delighted to see Petter pick up his first stage win with the Fiesta RS WRC, especially in the difficult conditions. Although by the third stage, Petter had lost time due to a broken wheel rim, he still holds third position. We will do everything to support his fight to remain on the podium on Sunday afternoon,” concluded Quinn.

Other news from Ford teams