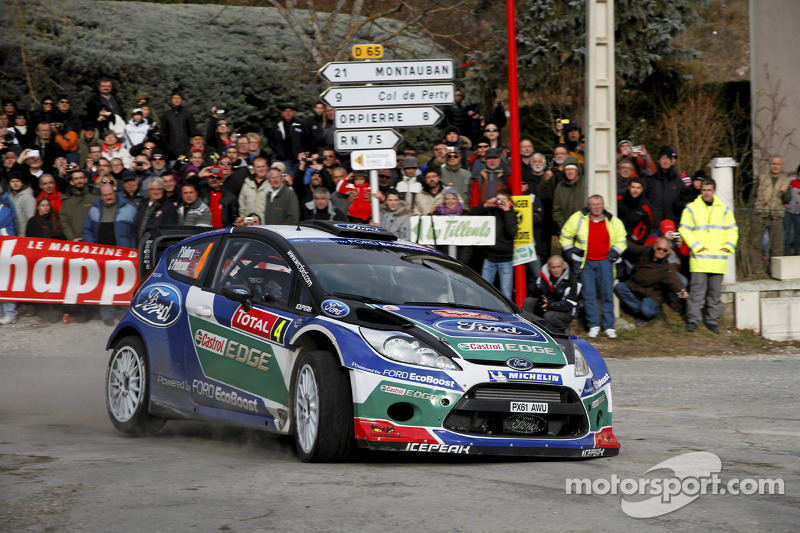 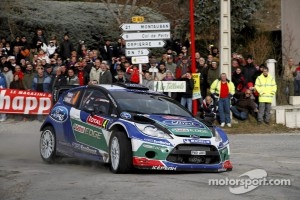 Petter Solberg and Chris Patterson look set to secure their first podium at the wheel of a Ford Fiesta RS WRC after racking up three consecutive stage wins at the iconic Rallye Monte-Carlo today. The Ford World Rally Team duo started the day aiming to defend their podium position, but an outstanding performance saw the team-mates close in on Dani Sordo to lie only 19.1sec adrift of second place.

Fifty-eight of the original 84 starting crews left the service park at Monaco’s glamorous harbour front this morning to contest two of the most famous stages in world rallying. Nestled in the Alpes Maritimes, today’s leg included a double pass over the legendary Col de Turini, notorious for its hairpins on a tight mountain pass which has also featured three times in the Tour de France. The repeat pass was set in complete darkness before the drivers returned to Monte-Carlo for the overnight halt.

Today’s speed tests were mostly dry and clear – a stark contrast to yesterday’s treacherously icy, foggy and rain-soaked roads. Despite differing temperatures on the stages, hard compound Michelin tyres were the order of the day for the Ford World Rally Team and Solberg was on flying form throughout the fourth leg of the 2012 FIA World Rally Championship curtain-raiser. The Norwegian posted the second-fastest stage time on the day’s opening test, followed by a dominant stage win on the iconic Col de Turini where he finished 8.4sec ahead of rally leader Sébastien Loeb.

“At the start of today I was focusing on keeping Mikko [Hirvonen] behind me. I didn’t want to push too hard in order to catch Dani [Sordo] because he was quite far in front at that point,” explained Solberg. “Then we had a really good feeling in the car from the very first stage and set a fastest time before returning to service. It was a dream!”

Solberg’s sterling performance during the first 42.22km loop saw the driver extend his lead over Hirvonen to 30.5sec whilst simultaneously applying pressure on Sordo in front. A margin of 39.9sec separated the 37-year-old from the second podium step going into Stage 16, but as the Norwegian scooped two further stage wins on the second pass, the gap was slashed to less than 20sec.

“This has been my best day in a car since 2004. I never dreamed of having a car as good as this, and to be able to attack on the stages like I have today is unbelievable,” exclaimed a beaming Solberg. “After such little time in the car, I’m surprised that I’ve adapted to it so quickly – and I can go a lot faster still! I’ve had a good feeling here right from the start, and with some small changes it seems I can do what I want with this car. That’s an incredible feeling – I’m having lots of fun, and the time seems to be coming naturally.

“I’m really happy to have set three fastest stage times today. If someone had offered me that this morning, I’d have gladly accepted it. When I drive with the feeling I have now it is just unbelievable. All of the Ford team have been so welcoming. I feel completely at home here. I can’t ask for anything better,” concluded Solberg.

Ford Team Principal Malcolm Wilson was delighted with the progress of his team’s newest recruit. “Petter and the car are working well as a team,” Wilson said. “His confidence in the car is really growing, and this has been perfectly demonstrated by three fastest stage times today. Petter has fitted naturally into the team, and to achieve everything he has so far considering his lack of experience in the car is exceptional. The potential he has shown demonstrates that he has the ability to produce an even better result, and that is tremendously encouraging for the rest of the season,” concluded Wilson.

Other news from Ford teams