Chile WRC: Tanak in command after Neuville rolls out 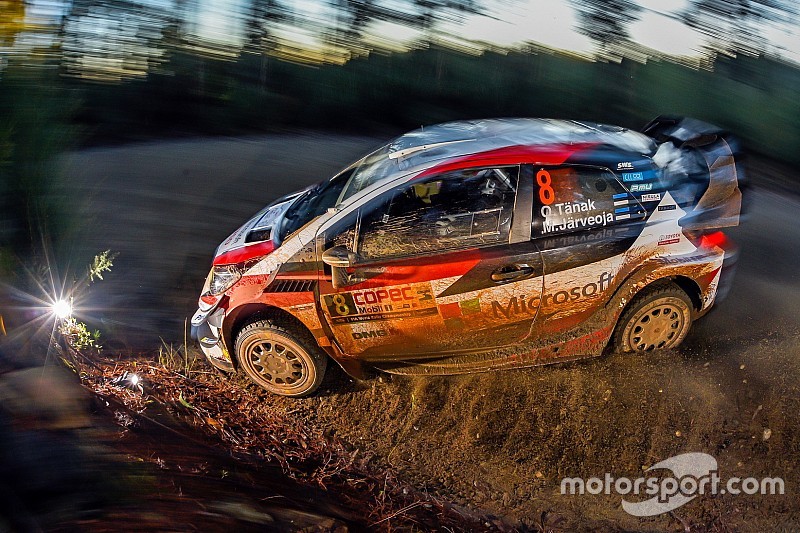 Toyota’s Ott Tanak edged further ahead of reigning World Rally champion Sebastien Ogier on the Saturday morning loop of Rally Chile, while Thierry Neuville rolled out of the podium battle.

Although Tanak only won one stage from three on Saturday morning, the loop-ending Pelun test, he gained more than 10 seconds over Ogier in all, extending his lead to 34.6s.

Ogier was initially being closed down by current points leader Neuville, who had top the times on the opening Rio Lia test and gained 5.7s on the Citroen driver.

But Neuville’s chase came to an abrupt halt on SS8, when he ran wide over a crest, hit a bank and rolled his Hyundai i20 several times, badly damaging his car and forcing him to retire.

That promoted Jari-Matti Latvala, who had initially dropped behind Neuville to fourth place, back to the final podium position.

Ogier is 16.4s clear of Latvala, who was slightly delayed on SS7 by his Toyota teammate Kris Meeke, with the Northern Irishman cruising through the stage after rolling his Yaris.

He lost 20.1s in all on Rio Lia in all but suggested some of that deficit would be recovered with an adjusted notional time, though for now his stage time remains the same.

Hyundai’s best-placed driver after Neuville’s retirement is Sebastien Loeb, who has closed up to only 1.1s behind Latvala in fifth place. Loeb gained time on Latvala during all three runs on Saturday morning, including a stage win on Maria Las Cruces.

Elfyn Evans is over 90s up on his M-Sport teammate Teemu Suninen, who occupy fifth and sixth places respectively.

Esapekka Lappi (Citroen) moved up to seventh at the expense of Andreas Mikkelsen (Hyundai) on Maria Las Cruces, after Mikkelsen had already been demoted a place by Suninen one stage earlier.

The Norwegian driver was the slowest driver bar gentleman driver Lorenzo Bertelli for most of the morning and is already 22.8s behind Lappi.

Despite losing several minutes with his roll, Meeke is currently in ninth place, having completed the last two stages of the Saturday morning loop at full speed and without a front windscreen.

Meeke however is expected to be demoted out of the top 10 after notional times are handed out for Maria Las Cruces, which was red-flagged for Neuville’s accident.

Kalle Rovanpera had looked set to concede the lead in WRC2 to Mads Ostberg on Rio Lia. But late on the morning’s first test, brake fluid started to leak from the Citroen driver’s rear brakes, which cost Ostberg over half a minute.

Neuville crashes out of Rally Chile