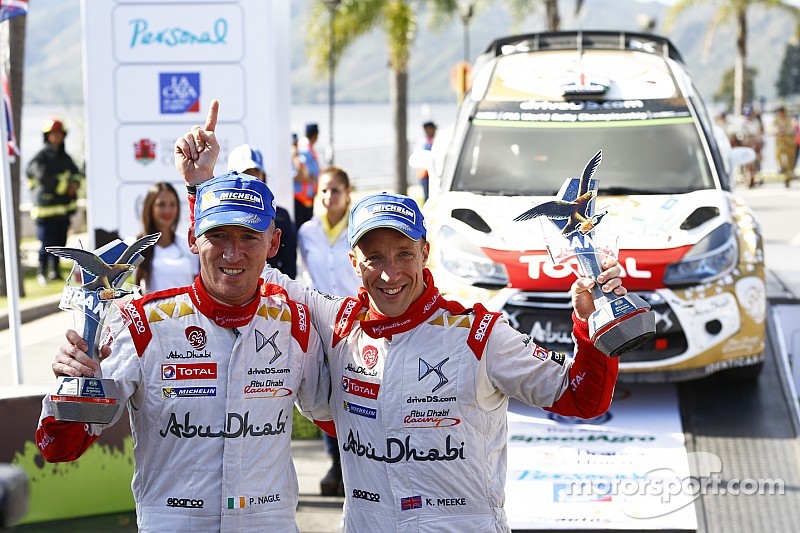 After Kris Meeke took a long-awaited first World Rally Championship win in Argentina, Jamie Klein asks whether this could be the first step towards restoring rallying’s profile in the UK.

An agonising 13-year wait for a British winner in the WRC finally came to an end on Sunday.

Kris Meeke responded to his critics in emphatic style with victory in Argentina, a car-breaker of a rally in which just about every leading runner experienced trouble of one kind or another.

It was precisely the sort of event where the 35-year-old had ample opportunity to live up to his reputation and squander the healthy lead his rivals' woes had gifted him, but British rally fans were spared heartbreak as Meeke held on to win by 18 seconds from Citroen teammate Mads Ostberg.

The Ulsterman's triumph was a timely one, as the pressure had been mounting just to bank a solid result in South America following crashes in each of the first three events of the season.

But, while the importance of Meeke's victory for his career can barely be overstated, its impact on the currently moribund level of interest in rallying in the UK is an altogether different question.

It was fitting that Meeke became the first Briton to win a round of the WRC since his late mentor Colin McRae, whose final triumph in the championship came in the 2002 Safari Rally.

Back then, the presence of two British champions at the highest level, McRae and Richard Burns, ensured that rallying was big news in the UK, but both had disappeared from the scene by the end of 2003, with no other home-grown talents on hand to take their place.

Combined with the rise to power of nine-time champion Sebastien Loeb, this meant that rallying quickly faded from the British sporting radar virtually to the point of non-existence in the years that followed, a process hastened by the sport's disappearance from terrestrial TV schedules.

One win not enough

In isolation, the impact of Meeke's first victory on the national consciousness will be minimal given just how little press coverage the WRC now receives in the mainstream media.

Indeed, that Ott Tanak's Ford Fiesta ending up in a Mexican lake attracted more media interest than the Citroen driver's triumph shows how far the sport has to go in recapturing its former level of popularity.

Without wishing to detract from Meeke's achievement, it will take a lot more than a single victory by a Brit before the nation begins to sit up and takes notice, and it seems doubtful he will be able to find the consistency needed to launch a full-blown title assault at this late stage in his career – and with Sebastien Ogier at the peak of his powers.

Even if he could, a British rallying resurgence would be far from guaranteed as live TV coverage of the sport is restricted to subscription-only channel BT Sport, with ITV4 showing delayed highlights.

Contrast that to the exposure the WRC used to enjoy when it featured as part of BBC's Grandstand programming, which was available to every household in the nation with a television and enabled the series to gather a considerable following in the wake of McRae's and Burns' heroics.

The considerable challenge rallying faces therefore is how to rebuild its following without the help of free-to-air TV coverage, which will only return once there is a sufficient level of interest in the sport.

What UK rallying badly needs is a real megastar; a young, exciting, charismatic driver capable of generating interest outside of the sport's core fanbase. In short, it needs another Colin McRae.

It's too late for Meeke to assume that role - McRae was only 25 when he took his first WRC win in New Zealand in 1993, two years before he became the series' youngest ever champion, also earning the unique distinction of being the first British title holder.

Meanwhile, the jury is still out on whether the other Briton active at rallying's highest level, Elfyn Evans, has what it takes to be a true title contender, though the 26-year-old has shown flashes of potential behind the wheel of his M-Sport Ford Fiesta.

Instead, what Meeke and Evans could do is to lay some sort of foundation – to inspire more young Brits to take up rallying, one of whom then may have McRae-esque levels of star potential.

It will take no less than the emergence of such a driver to capture the public imagination once more.